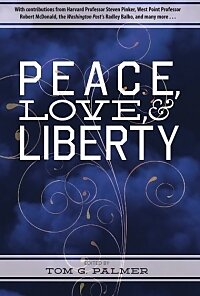 Hundreds of thousands of protesters are marching in Hong Kong under the banner of “Occupy Central for Love and Peace.” Have I got a book for them!


Cato Senior Fellow Tom G. Palmer has just edited Peace, Love, & Liberty, a collection of writings on peace. This is the fifth book edited by Palmer and published in collaboration with the Atlas Network, where he is executive vice president for international programs, and Students for Liberty, which plans to distribute some 300,000 copies on college campuses.


But don’t write this book off as a student handout. There’s really impressive material in here. Palmer wrote three long original essays: “Peace Is a Choice,” “The Political Economy of Empire and War,” and “The Philosophy of Peace or the Philosophy of Conflict.” These are important and substantial articles.


But his aren’t the only impressive articles. The book also includes:


And all this for only $9.95 at Amazon! Or even less from Amazon’s affiliates. If you want to buy them in bulk — and really, you should, especially for your peace‐​loving friends who aren’t yet libertarians — contact Students for Liberty.