Paul Martin: The Bill Clinton of Canada, Only Much Better

Imagine how weird it would be if the Cato Institute and Americans for Tax Reform praised Barack Obama for fiscal responsibility. And think how inconceivable it would be for the Heritage Foundation and the National Taxpayers Union to applaud Tim Geithner for economic stewardship.

The Canadian version of that happened while I was at the conference of the World Taxpayers Association in Vancouver two weeks ago.

The event was organized by the Canadian Taxpayers Federation and the main speaker was Paul Martin of the Liberal Party, who served as finance minister from 1993 to 2002, and then as prime minister from 2003 to 2006. I should add, for context, that the Liberal Party in Canada is not a classical liberal party with a track record of free markets and small government.

But Paul Martin was honored because he was responsible, while finance minister, for one of the best records of fiscal restraint of any policymaker in recent history (click here for international comparisons).

I've pointed out that the burden of spending fell under Bill Clinton, and I've even acknowledged that the federal budget hasn't grown much under Obama, at least once you get past his first couple of years. But Paul Martin was far more frugal. And since Canada has a parliamentary system, there's no ambiguity about who deserves credit. He restrained spending when his party had control.

What happened to generate the good results? For all intents and purposes, he imposed a spending freeze. And I'm talking a nominal spending freeze, not the kind of fake fiscal discipline you get when politicians make "cuts" off an inflated baseline. Because the budget was successfully restrained, that addressed both the problem of too much spending and the symptom of red ink.

In his speech, Martin won me over when he bragged that the burden of government spending fell to its lowest point in 50 years. My man-crush on him became even more pronounced when he said his administration allowed agencies to ask for more funds, but only if they identified offsetting cuts elsewhere. What a novel concept! A government that actually looked at tradeoffs and prioritized outlays. Sort of like a household or business. 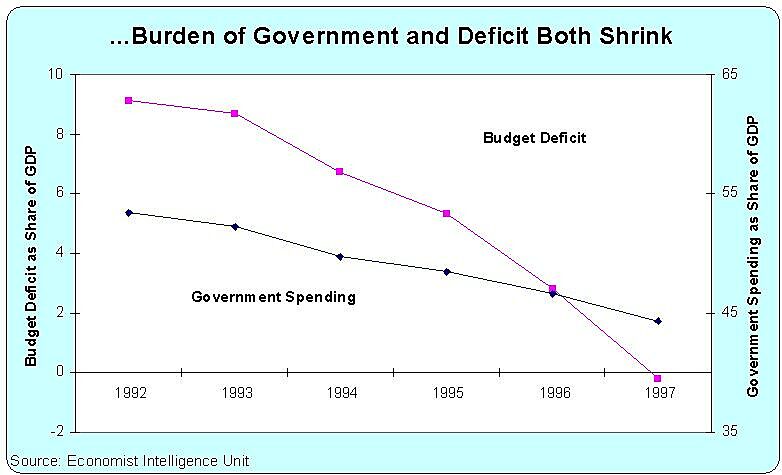 I asked the former prime minister a couple of questions. I was specifically interested in why the Liberal Party didn't behave like other left-wing parties and raise taxes to enable bigger government. Martin said there were some in his party who wanted that approach, but that there were two reasons why he instead chose to follow good policy.

First, enough people understood that Canada has a spending problem rather than a revenue problem. And second, there was concern that financial markets would react poorly if policymakers simply pushed for higher taxes and ignored the size of government. I wish the average Republican had the same sophisticated understanding of fiscal policy.

No wonder Canada got such good results. They imposed austerity on the public sector, rather than trying to squeeze the private sector (a distinction that seems to escape Paul Krugman).

To give you an idea of what Paul Martin accomplished, here is a video, prepared by the Canadian Taxpayers Federation, that features laudatory comments by representatives of major market-oriented think tanks. At the risk of stating the obvious, I don't think there will ever be a video like this about Obama.

The video is very well done, even though I think it focused too much on red ink and not enough on the real accomplishment of spending restraint. On that issue, Chris Edwards has produced some very good data on what's happened to the burden of government spending is his home country. And for further information on the topic, here's my video on international examples of spending restraint. Canada, you'll notice, is one of the prominent case studies.

P.S.: If you know any Keynesians, you can have some fun by asking them why Canada's economy grew when the burden of government spending was reduced.

P.P.S.: It's also very impressive that Canada has one of the lowest levels of welfare spending of any developed nation.

P.P.P.S.: No wonder Canada now ranks above the United States for economic freedom, and the freest jurisdiction in North America is actually a Canadian province.

P.P.P.P.S.: To end on a humorous note, Canada should fortify its border to avoid an influx of American leftists.