Paul Krugman dismisses concerns that the Obama administration’s fiscal and regulatory policies are fostering uncertainty in the business community, and thus inhibiting job growth and an economic recovery.

My Cato colleagues and I have been citing this “regime uncertainty” for a while now, and it is gaining mainstream acceptance as evidenced by a recent Washington Post editorial.

I have pointed to surveys of small businesses conducted by the National Federation of Independent Business. The businesses surveyed continually cite the combination of government taxes and regulations as their “single most important problem.”

However, Krugman looks at the NFIB’s most recent survey and comes away with a different conclusion:

Or read through the latest survey of small business trends by the National Federation for Independent Business, an advocacy group. The commentary at the front of the report is largely a diatribe against government — “Washington is applying leeches and performing blood-letting as a cure” — and you might naïvely imagine that this diatribe reflects what the surveyed businesses said. But while a few businesses declared that the political climate was deterring expansion, they were vastly outnumbered by those citing a poor economy.

This is the chart from the survey that Krugman is referencing: 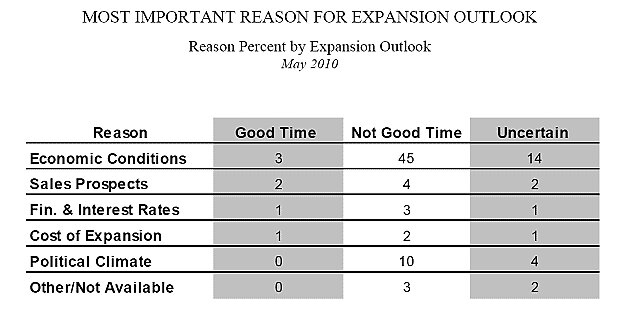 Considering the depth and length of the recession, the fact that "economic condition" is the runaway leader isn’t surprising. But I wonder how many of the businesses citing “economic conditions” are happy with the “political climate.” I doubt very many. Notice that zero respondents said that the political climate was a “good time” to expand. Couple that with the plurality who said this isn’t a good time to expand due to economic conditions and you get an indictment of the administration’s interventionist policies that Krugman has supported.

The charts at the back of the report, showing trends in business perceptions of their “most important problem,” are even more revealing. It turns out that business is less concerned about taxes and regulation than during the 1990s, an era of booming investment. Concerns about poor sales, on the other hand, have surged. The weak economy, not fear about government actions, is what’s holding investment down.

Interestingly, Krugman ignores the chart that immediately precedes the trends in business perceptions: the “single most important problem” respondents currently face. It is definitely more revealing: 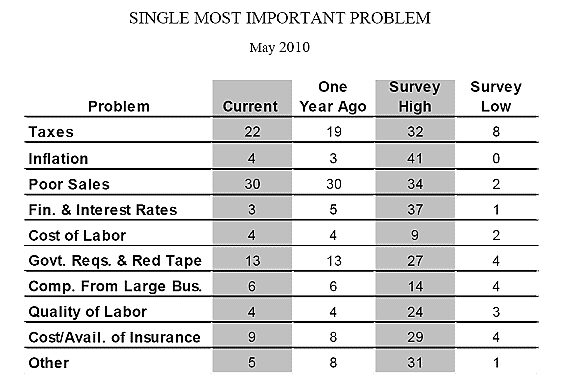 Thirty percent of respondents said their single most important problem is “Poor Sales.” “Taxes” and “Government Regulations and Red Tape” come in second and third place at 22 percent and 13 percent respectively. Combining the two, the biggest problem facing small businesses according to respondents is government.

Take a look at the trend chart that includes taxes: 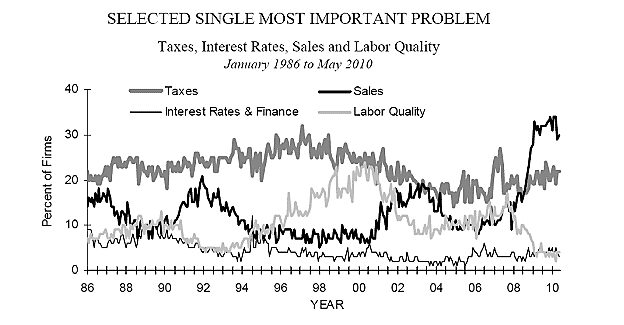 Also note how much higher taxes rank than financing. Yet, it seems that most media outlets believe credit unavailability is the chief problem facing businesses. Indeed, the president has been pushing a $30 billion package to increase lending to small businesses. But businesses don’t need more subsidized credit backed by taxpayers --- they need relief from the president’s agenda.