Paul Krugman on Pump‐​Priming and Trump

New York Times columnist Paul Krugman recently chided President Trump for imagining he invented the metaphor of “priming the pump” during an Economist interview. Yet Krugman, like Trump, buys into the premise that budget deficits really do “stimulate” total spending or “aggregate demand” which is commonly measured by growth of Nominal GDP (NGDP).

Economic booms and busts clearly have huge effects on budget deficits, but where is the evidence that deficits and surpluses have their own separate (“exogenous") effect on NGDP?

To isolate cause and effect, we have to take out the “endogenous” effects that ups and downs in the economy have on taxes and spending. That is why the Congressional Budget Office (CBO)estimates budget deficits or surpluses (divided by GDP) without automatic stabilizers, which has traditionally been called the “cyclically-adjusted” budget. I will label it the “C-A Deficit” for short. 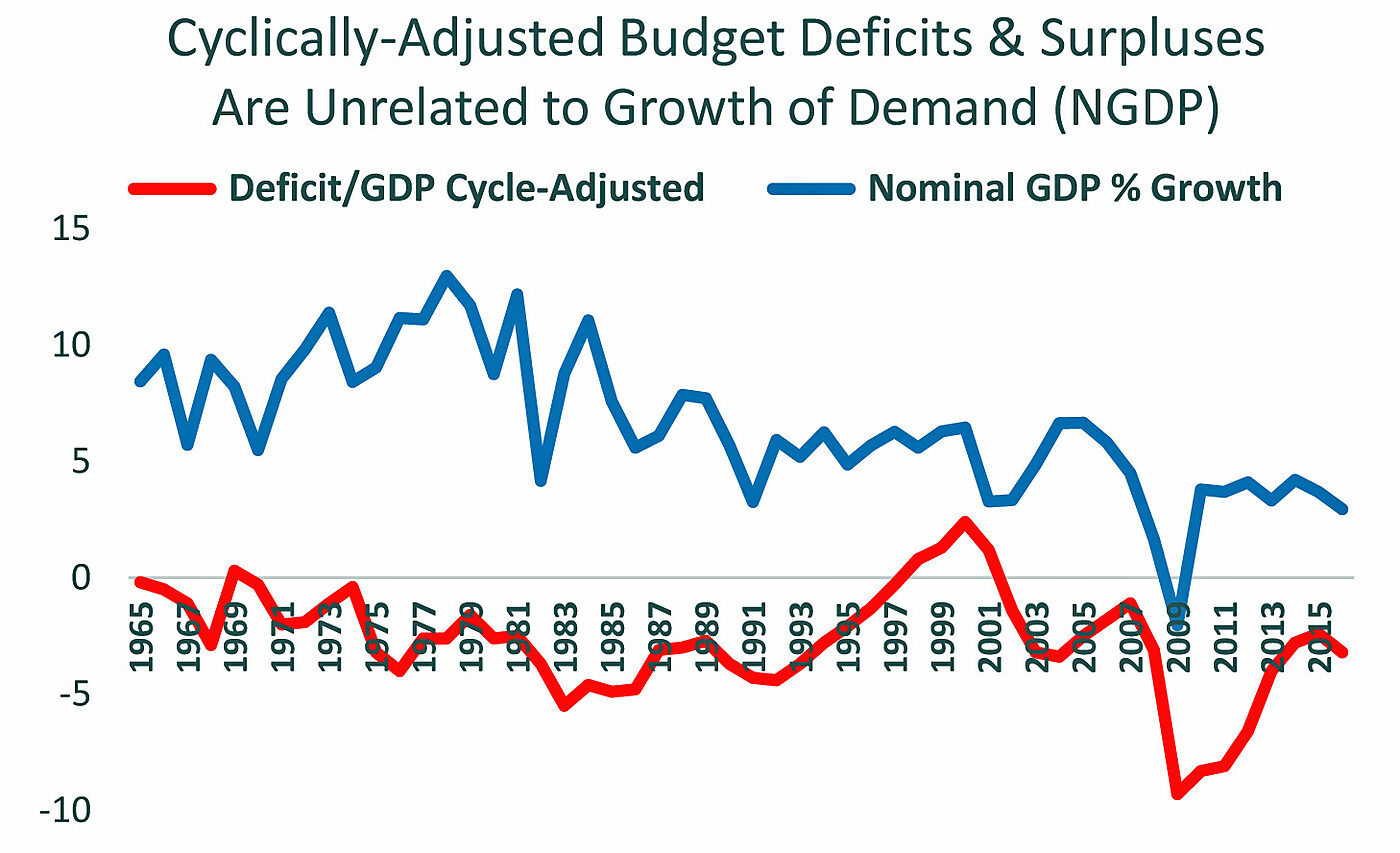 The red line in the graph shows the CBO’s Cyclically-Adjusted (C-A) deficit or surplus as a share of GDP. The blue line shows the percentage growth in Nominal GDP (NGDP).

Contrary to 1960s Keynesian orthodoxy, the graph and table reveal no connection between the size of cyclically-adjusted deficits or surpluses and the rate of growth of aggregate demand (NGDP).  From 1991 to 2001, for example, the C-A Budget swings from an average deficit to a sizable surplus with essentially no change in the pace of NGDP growth.

There is no measurable or even visible connection between larger CA-Deficits and faster NGDP growth in 2009-2012, nor between budget surpluses and slower NGDP growth in 1998-2000.  For more than 50 years, our experience has frequently been the opposite of what demand-side fiscalism predicts. This is not just a short-term phenomenon.

The Table highlights three extended periods when the assumed connection between C Deficits and NGDP was the opposite of what Krugmanian/Keynesian Pump Primerism would lead you to believe.


Mainstream economists confidently predicted that the massive 2009-2012 additions to Column A (the C-A deficit) would result in faster increases in Column B (NGDP).  That was a testable, falsifiable hypothesis.  It was tested and falsified.

Being unscientific and unapologetic, Mr. Krugman declares, “the first few years after the 2008 financial crisis. . . was a time for serious pump-priming; unfortunately, we never got enough of it . . .”

Not enough of it?!  No remotely comparable U.S. “fiscal stimulus” ever happened before.  FDR’s reputedly miraculous New Deal C-A deficits averaged just -1-7% of GDP from 1933 to 1939, according to MIT economist E. Cary Brown.

In reality, fiscal and monetary “stimulus” were tested to the extreme after 2008 and failed spectacularly.  To now attempt to explain-away this dramatic failure of demand-side nostrums by declaring that cyclically-adjusted deficits above 8% of GDP were actually quite small is a feeble ad hoc excuse.  So too are the Keynesian magician’s empty claims that insipid NGDP growth “would have been even worse” without enormous deficits.

A few years ago, I concluded, “The remarkably aggressive fiscal and monetary effort to stimulate demand did not stimulate demand. . . The promised stimulus from the previous fiscal and monetary binge remains undetectable—a big fizzle. Demand grew much faster (at a 6.1% pace) from 1998 to 2000, when the budget was in surplus and the Fed hiked the fed-funds rate to 6.5%.”

Turning back to Trump’s recent pump-priming remark, Krugman says “the economic engine no longer needs a fiscal jump start.  This is exactly the wrong time to be talking about the desirability of bigger budget deficits.”  Actually, it’s always the wrong time to be talking about budget deficits producing a “fiscal jump start,” because that’s a false metaphor with no basis in fact.  It doesn’t work.  It never worked.

A commonplace Keynesian retort is to point to the late 1960s, when Great Society and Vietnam War spending was said to have caused a “Guns and Butter” inflation, irrespective of Fed policy. That story is just as wrong as pointing to the New Deal as a successful example of fiscal stimulus.  It turns out that the C-A deficit averaged only -1.2% from 1965 to 1968, and was far below average in every year except 1968.  Even at the peak in 1968, the C-A deficit was only -2.9% of GDP, about the same as 2013-2016 (-2.8%)

Higher tax rates can crush the economy, but a crushed economy never ends up with a budget surplus.  LBJ’s ill-fated surtax of June 28, 1968 [$] was a failed experiment of using a fiscal solution to a monetary problem. Congressional Quarterly called it “the first complete test of the “New Economics”—a theory that Government fiscal policy should be used to guide the national economy through Budget deficits in a recession and Budget surpluses (or at least smaller deficits) during inflation.”  The 10% surtax on corporate and individual income was supposed to slow NGDP and thus inflation, but nothing like that happened until the Fed pushed the fed funds rate from 6% at the end of 1968 to 9.2% by August 1969.  LBJ’s “first complete test” failed completely, and so did Obama’s daredevil test of doubling-down on the national debt.

For the first four years after the 2008 financial crisis, unprecedented C-A Deficits resulted in the polar opposite of a “jump start” to demand (NGDP).  After President Obama’s experience, plus the endless failures of “fiscal stimulus” in Japan, how can anyone pretend to worry that much smaller deficits under President Trump would risk pump-priming excessive growth of demand?

For both Krugman and Trump, Pump-Primerism relies on an obstinate faith that huge Obama’s gigantic C-A Deficits must “stimulate demand” while Clinton’s budget surpluses must have had the opposite, depressing effect.  That unsupportable belief repeatedly conflicts with reality, yet Krugman always clings to the comfort of Keynesian theory and considers reality expendable.