War is the health of the state, Randolph Bourne famously said, and President Trump is hardly alone in describing the fight against COVID-19 as a “war.” However inapposite that metaphor might be, public officials at all levels of government are now exercising emergency powers rarely seen outside the context of total war.

Wars—metaphorical and literal—have also been the health of the presidency. In his first inaugural, along with the famous lines about “fear itself,” FDR announced his desire for “broad Executive power to wage a war against the emergency, as great as the power that would be given to me if we were in fact invaded by a foreign foe.” Given a serious enough crisis, that gambit usually works. 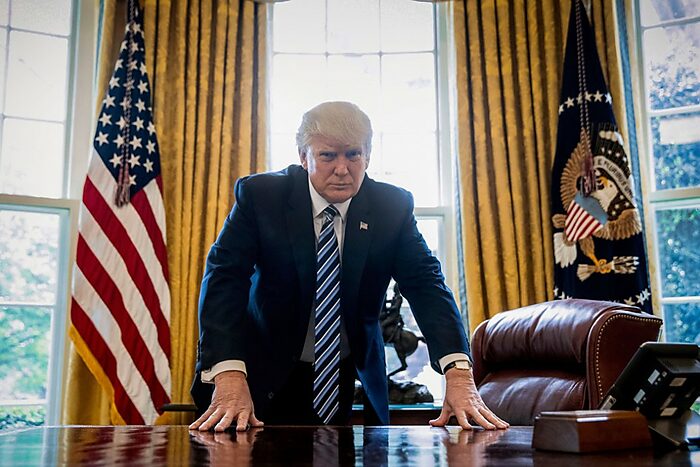 What’s surprising—and I should probably type this with my fingers crossed—is that so far, the COVID-19 crisis hasn’t yet led to massive new presidential power grabs. Trump’s performance has been appalling in myriad other ways—from his just‐​the‐​flu denialism of a month ago to the Chavezian, “Hello President!” tenor of his daily Coronavirus briefings. But in terms of exploiting the pandemic to radically expand executive power—again, so far—Trump has been a piker next to FDR, George W. Bush, or even Barack Obama.

Harvard Law’s Noah Feldman recently had a provocative piece in Bloomberg making that case: “Coronavirus Response Shows Trump Isn’t a Dictator.” Feldman, you may recall, was a key Democratic witness making the constitutional case for Trump’s impeachment: he’s emphatically not a fan of this president. Still, Feldman argues, during the COVID-19 outbreak, Trump has “pretty consistently done the opposite” of what the would‐​be autocrat’s playbook would call for in terms of amassing power.

There’s something to this: as Feldman points out, Trump has dragged his heels about making more than nominal use of the staggering powers delegated to the president by the Defense Production Act. (It is somewhat strange to hear Democrats urge this president to wield “semi‐​dictatorial powers.”)

And, despite Trump’s flagrant abuses of national emergency powers earlier in his presidency, it’s hard to get too worked up about the Coronavirus emergency declaration he issued on March 13th. For one thing—unlike, say, Mexican‐​Border crossing—a once‐​a‐​century global pandemic can fairly be described as a “national emergency.” For another, the statutory powers unlocked by the decree were hardly terrifying; some, like the loosening of federal restrictions on telemedicine and in‐​state medical licensing, were entirely sensible.

Still, I think Feldman lets the president off too easy when it comes to Trump’s abortive proposal for a Tristate lockdown, in the form of an “enforceable quarantine” surrounding New York, New Jersey, and Connecticut. Since CDC doesn’t have a police force capable of erecting a cordon sanitaire around some 30 million Americans, an “enforceable quarantine” would require US military “boots on the ground” and guns turned on American citizens. It’s good that Trump quickly abandoned the idea, but maybe he shouldn’t float his dystopian brainwaves over Twitter in the first place.

And we need to add a major qualifier to Feldman’s assessment that Trump’s “fairly consistent choice thus far in the Covid‐​19 crisis [has been] to reject the impulse to grab power.” It’s true Trump hasn’t pushed for major expansions of presidential power to fight the virus; but he has used the crisis as cover for a power‐​grab of a different sort.

Where past presidents have pushed against constitutional limits in service of policy goals or ideological commitment to the strong presidency, Trump’s interest in executive power has always been overwhelmingly personal. He believes in his “absolute right” to wield it as a weapon for settling scores, “screw[ing] his political enemies,” and shielding himself and his allies from unwelcome scrutiny.

That probably explains his boldest presidential‐​power move since the COVID-19 pandemic began: what even the Trump‐​friendly NY Post’s editorial board calls a “war” on inspectors general.

A week ago, Trump fired Michael Atkinson, the Intelligence Community’s Inspector General, in a transparent act of payback for his role in the events that led to Trump’s impeachment (Atkinson, as he was legally bound to do, notified Congress of the whistleblower complaint about his July 25 call with the president of Ukraine). On Tuesday, Trump ousted the Pentagon IG appointed as head watchdog over the disbursement of more than $2 trillion of pandemic relief funds. (For good measure, the same day, he slammed a third IG, HHS’s Christi Grimm, for issuing an accurate report on COVID-19 test shortages and lack of protective equipment for front‐​line health care workers: “Another Fake Dossier!”)

The war on IGs isn’t a presidential power grab in the usual sense of torturing noncompliant laws into submission. The relevant statutes give the president the power to fire the officials in question. But the governing expectation has always been that it would be shameful and inappropriate to remove an IG for exposing misbehavior, corruption, and incompetence. Trump’s attack on that norm, in the midst of a crisis, will likely succeed, making it easier for future presidents to get away with similar moves. That prospect isn’t as immediately alarming as military lockdowns or dictatorial economic powers. Even so, while we’re planning for the eventual return to “normalcy,” we should take care that the new normal doesn’t include an executive branch even more susceptible to corruption and abuse of power.