One Year Later, Another Look at Obamanomics vs. Reaganomics

On this day last year, I posted two charts that I developed using the Minneapolis Federal Reserve Bank's interactive website.

Those two charts showed that the current recovery was very weak compared to the boom of the early 1980s.

But perhaps that was an unfair comparison.

Maybe the Reagan recovery started strong and then hit a wall. Or maybe the Obama recovery was the economic equivalent of a late bloomer.

So let's look at the same charts, but add an extra year of data. Does it make a difference?

Let's start with the GDP data. The comparison is striking. Under Reagan's policies, the economy skyrocketed.  Heck, the chart prepared by the Minneapolis Fed doesn't even go high enough to show how well the economy performed during the 1980s.

Under Obama's policies, by contrast, we've just barely gotten back to where we were when the recession began. Unlike past recessions, we haven't enjoyed a strong bounce. And this means we haven't recovered the output that was lost during the downturn. 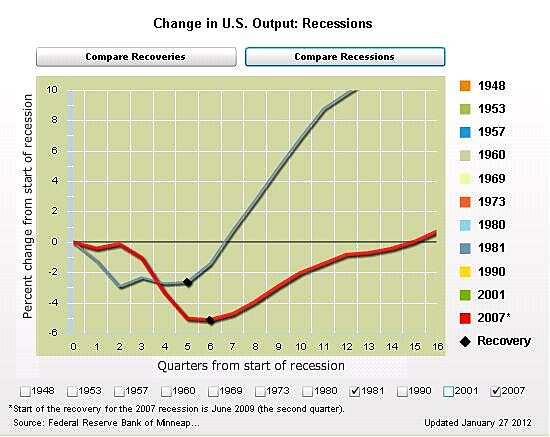 This is a damning indictment of Obamanomics

Indeed, I made this point several months ago when analyzing some work by Nobel laureate Robert Lucas. And it's been highlighted more recently by James Pethokoukis of the American Enterprise Institute and the news pages of the Wall Street Journal.

Unfortunately, the jobs chart is probably even more discouraging. As you can see, employment is still far below where it started.

This is in stark contrast to the jobs boom during the Reagan years. 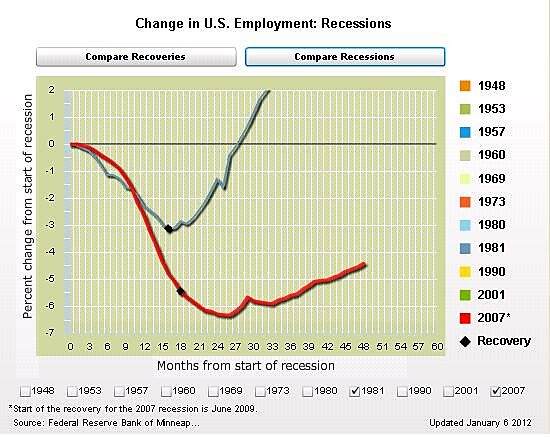 So what does this mean? How do we measure the human cost of the foregone growth and jobs that haven't been created?

Writing in today's Wall Street Journal, former Senator Phil Gramm and budgetary expert Mike Solon compare the current recovery to the post-war average as well as to what happened under Reagan.

If in this "recovery" our economy had grown and generated jobs at the average rate achieved following the 10 previous postwar recessions, GDP per person would be $4,528 higher and 13.7 million more Americans would be working today. ...President Ronald Reagan's policies ignited a recovery so powerful that if it were being repeated today, real per capita GDP would be $5,694 higher than it is now—an extra $22,776 for a family of four. Some 16.9 million more Americans would have jobs.

By the way, the Gramm-Solon column also addresses the argument that this recovery is anemic because the downturn was caused by a financial crisis. That's certainly a reasonable argument, but they point out that Reagan had to deal with the damage caused by high inflation, which certainly wreaked havoc with parts of the financial system. They also compare today's weak recovery to the boom that followed the financial crisis of 1907.

But I want to make a different point. As I've written before, Obama is not responsible for the current downturn. Yes, he was a Senator and he was part of the bipartisan consensus for easy money, Fannie/Freddie subsidies, bailout-fueled moral hazard, and a playing field tilted in favor of debt, but his share of the blame wouldn't even merit an asterisk.

I could continue, but you probably get the  point. On economic issues, the only real difference is that Bush cut taxes and Obama is in favor of higher taxes. Though even that difference is somewhat overblown since Obama's tax policies - up to this point - haven't had a big impact on the overall tax burden (though that could change if his plans for higher tax rates ever go into effect).

This is why I always tell people not to pay attention to party labels. Bigger government doesn't work, regardless of whether a politician is a Republican or Democrat. The problem isn't Obamanomics, it's Bushobamanomics. But since that's a bit awkward, let's just call it statism.