At the risk of understatement, I'm not a fan of the Organization for Economic Cooperation and Development. Perhaps reflecting the mindset of the European governments that dominate its membership, 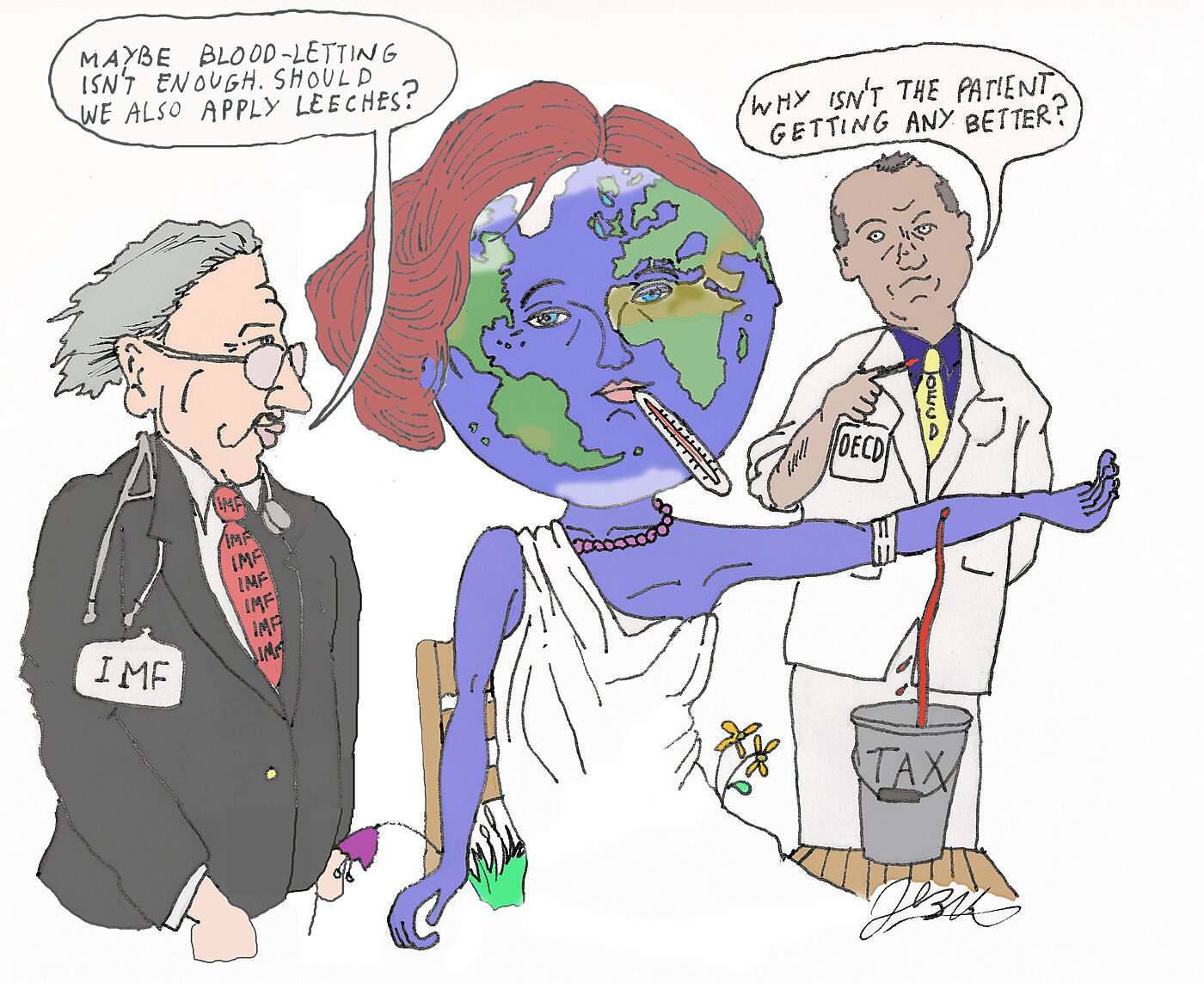 the Paris-based international bureaucracy has morphed into a cheerleader for statist policies.

All of which was just fine from the perspective of the Obama Administration, which doubtlessly appreciated the OECD's partisan work to promote class warfare and pimp for wasteful Keynesian spending.

What is particularly irksome to me is the way the OECD often uses dishonest methodology to advance the cause of big government:

But my disdain for the leftist political appointees who run the OECD doesn't prevent me from acknowledging that the professional economists who work for the institution occasionally generate good statistics and analysis.

For instance, I've cited two examples (here and here) of OECD research showing that spending caps are the only effective fiscal rule. And I praised another OECD study that admitted the beneficial impact of tax competition. I even listed several good examples of OECD research on tax policy as part of a column that ripped the bureaucracy for some very shoddy work in favor of Obama's redistribution agenda.

And now we have some more good research to add to that limited list. A new working paper by two economists at the OECD contains some remarkable findings about the negative impact of government spending on economic performance. If you're pressed for time, here's the key takeaway from their research:

Governments in the OECD spend on average about 40% of GDP on the provision of public goods, services and transfers. The sheer size of the public sector has prompted a large amount of research on the link between the size of government and economic growth. ...This paper investigates empirically the effect of the size and the composition of public spending on long-term growth... The main findings that emerge from the analysis are... Larger governments are associated with lower long-term growth. Larger governments also slowdown the catch-up to the productivity frontier.

For those who want more information, the working paper is filled with useful information and analysis.

Here's one of the charts from the study, showing how government spending is allocated in OECD nations. 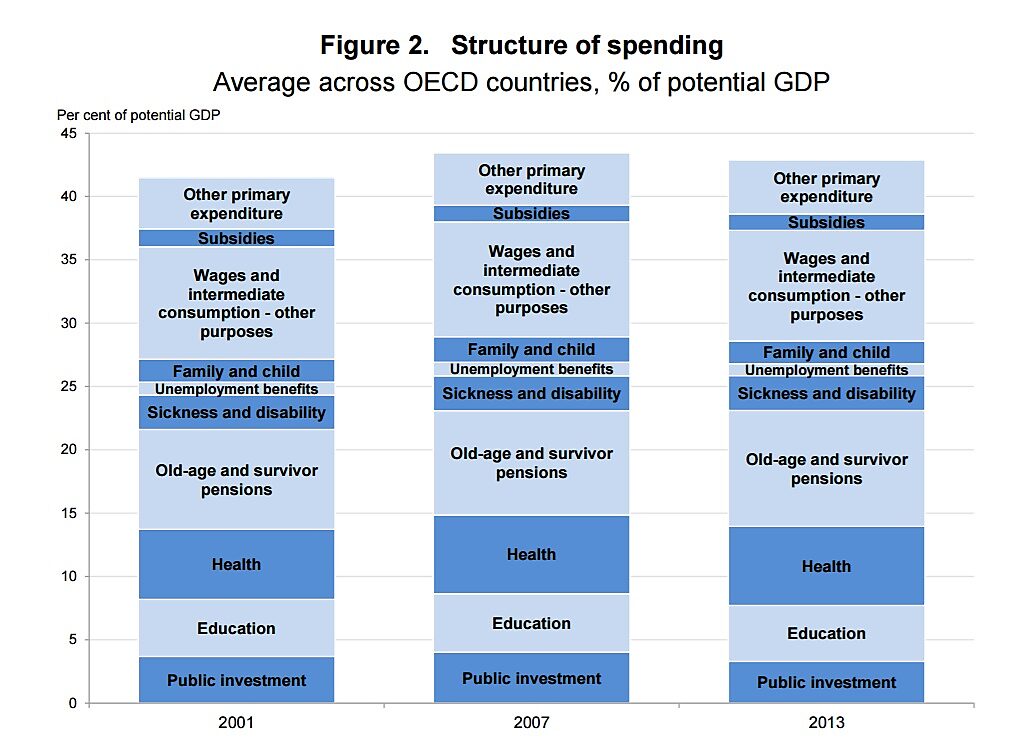 By the way, the reference to "hump-shaped" means that the OECD is even aware of the Rahn Curve.

And here's a chart showing how much more growth would be possible if the countries with really-big government downsized their public sectors to the somewhat-big level. 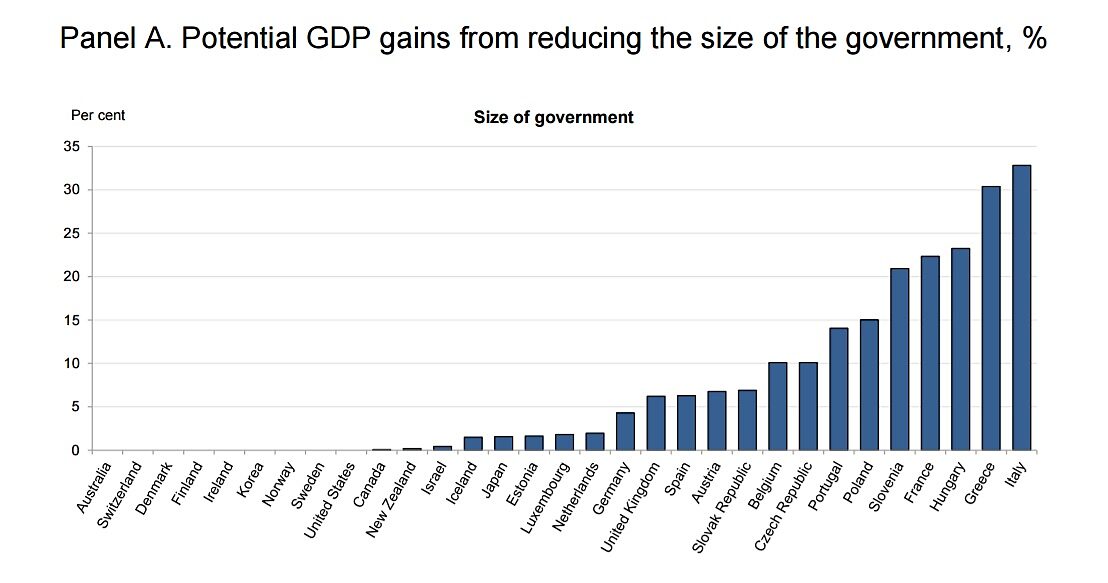 The working paper also looks at the composition of government spending. In other words, just as not all taxes are equally damaging, the same is true for spending programs.

The results from the estimation of the size of the government and the public spending mix illustrate that public spending matters for long-term growth...pension and subsidy spending [are] the two items with a significantly negative effect on growth. As each regression includes the size of government and one spending share, the estimates provide the effect of increasing this type of spending while decreasing spending on other items to keep the spending to GDP ratio unchanged... larger governments are in several specifications significantly and negatively associated with long-term growth. This is consistent with the literature... Larger governments can impede convergence (Table 8, columns 1 and 3), because they are associated with higher taxation that can discourage business investment including foreign investment and households to supply labour.

Pensions and subsidies seem to cause the most economic harm.

Reducing the share of pension spending in primary spending yields sizeable growth gains with no significant adverse effect on disposable income inequality. This reduction could be achieved by an increase in the effective retirement age or by cutting the replacement rate. ...Cutting public subsidies boosts growth, as public subsidies...can distort the allocation of resources and undermine competition. ...Education outcomes depend not only on education spending but also on the effectiveness of education policies, and the literature suggest the latter can be more important. Since the seminal work of Coleman (1966), a broad literature suggests that there is no clear link between education spending and education outcomes. ...policies aimed at increasing education spending effectiveness can be more appropriate than an across-the-board rise of education spending. ...It may be that, beyond a certain point, additional spending on investment has adverse effects, if poorly managed.

For those of you with statistical/econometric knowledge, here's some relevant data from the study.

And you can match the numbers in Table 6 with these excerpts.

If you're not a stats wonk, these two charts may be more helpful and easy to understand. 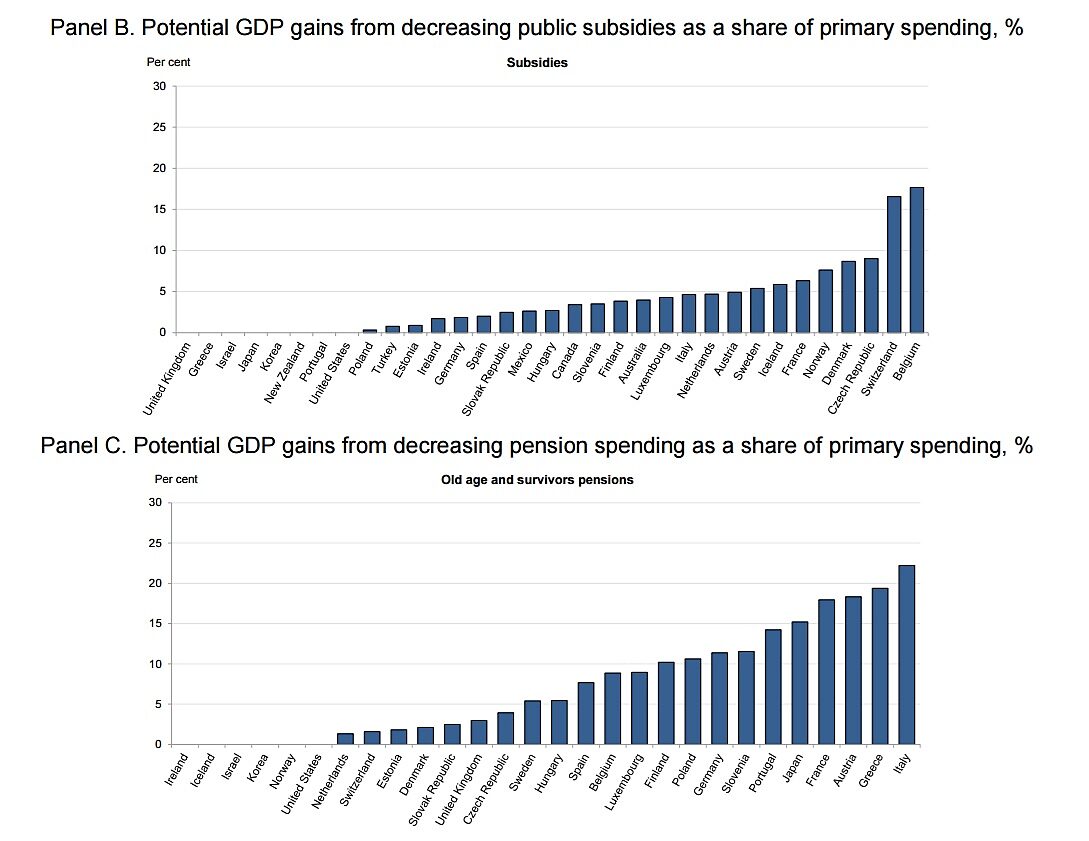 What jumped out at me is how the normally sensible nation of Switzerland is very bad about subsidies. That's a policy they obviously need to fix (along with the fact that they also have a wealth tax, which is very uncharacteristic for that country).

Let's return to the study. One of the interesting things about the working paper is that it notes that bad fiscal policy can be somewhat mitigated by having market-oriented policies in other areas, which is a point I always make when writing about Scandinavian nations.

In other words, the moral of the story is that smaller government is good and free markets are good. Mix the two together and you have best of all worlds.

P.S. Even if the OECD published dozens of quality studies like this one, I would still argue that American taxpayers should no longer be forced to subsidize the Paris-based bureaucracy. And even if the OECD's political types stopped pushing statist policies, I would still have the same view about ending handouts from American taxpayers. This has nothing to do with the fact that the bureaucrats once threatened to have me arrested and thrown in a Mexican jail. I simply don't think taxpayers should fund international bureaucracies.

P.P.S. Other international bureaucracies, including the World Bank and European Central Bank, also have published good research about the negative effect of excessive government spending.