For the last two years, we have been working on the question of data transparency. In a paper last fall called Publication Practices for Transparent Government, we examined what it takes to foster transparency. And we started informally grading the quality of data put out by Congress and the administration. First, it was legislative data, which, as I reported here, needs improvement. (Also see our Capitol Hill briefing.) Then it was budget, appropriations, and spending data. In that area, "needs improvement" is an understatement. (And another Capitol Hill briefing.) 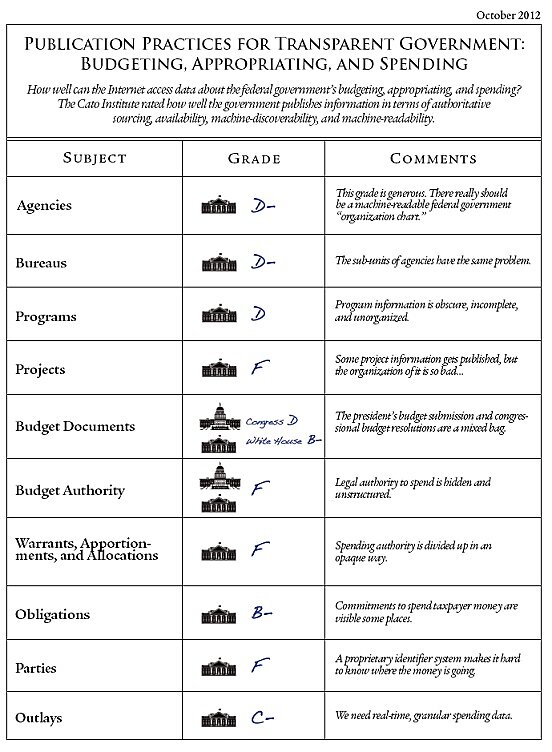 Now we are in a position to formally grade the quality of data coming out of the government. And the interesting finding, to be formally released on Monday, is that President Obama lags House Republicans in transparent data publication. The paper is called "Grading the Government's Data Publication Practices."

Obama is the president who ran in 2008 on strong promises of transparent government. Within minutes of his taking office on January 20, 2009, the Whitehouse.gov website declared: "President Obama has committed to making his administration the most open and transparent in history."

His first presidential memorandum, issued the next day, was entitled "Transparency and Open Government," and it declared:

My Administration is committed to creating an unprecedented level of openness in Government. We will work together to ensure the public trust and establish a system of transparency, public participation, and collaboration. Openness will strengthen our democracy and promote efficiency and effectiveness in Government.

President Obama’s Sunlight Before Signing campaign promise--- his pledge to post laws to the White House website for five days of public comment before he signed them---was his first broken promise. It went virtually ignored in the first year of his administration.

But it wasn't a lack of energy and creativity that derailed the transparency project.

There is still no machine-readable organization chart for the federal government. The agencies, bureaus, programs, and projects of government---its basic building blocks---don't have identifiers people could use to track the government with the aid of their computers. That is why, as you can see above, the administration gets very poor grades on its data publication practices.

Meanwhile, the Congress has plodded forward with data publication reforms that, although minor, represent progress. The House leadership, for example, produced docs.house.gov, at which it makes available the bills coming to the House floor in a format that can be automatically read and disseminated.

A follow-on, beta.congress.gov, will eventually replace the THOMAS Web site. THOMAS was revolutionary for its time, but ideally a basic web interface and bulk data access will make for a robust legislative information environment.

Congress's grades are better than the administration's, though nobody can argue that the job is done.

The report summarizes things this way:

Between the Obama administration and House Republicans, the former, starting from a low transparency baseline, made extravagant promises and put significant effort into the project of government transparency. It has not been a success. House Republicans, who manage a far smaller segment of the government, started from a higher transparency baseline, made modest promises, and have taken limited steps to execute those promises.