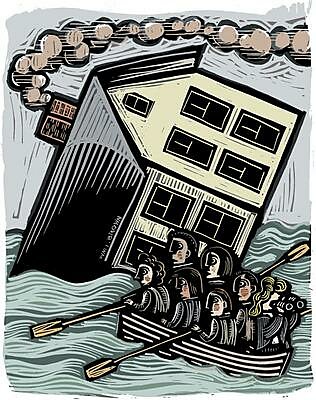 The Federal Housing Administration is heading toward a taxpayer bailout, yet the president’s latest mortgage modification plan would further increase the agency’s exposure to risky mortgages. Mark Calabria calls it a “Backdoor Bank Bailout.”

The administration’s plan would encourage borrowers who owe more than their house is worth to refinance into FHA-insured mortgages. Therefore, the risk of a future foreclosure on these mortgages would fall to the government and taxpayers instead of private lenders.

To get these mortgages in better shape so the FHA can insure them, $14 billion in TARP money is going to be used to pay private lenders to reduce the amount borrowers owe on their mortgages. Some of this money will also be used to cover eventual losses on these loans. As a taxpayer whose mortgage is underwater, and who would rather go bankrupt than accept a government handout, I find it infuriating that my tax dollars are being used to bail out others in a similar situation.

But with government housing programs, it’s standard practice for officials to cannonball into the pool and worry about who gets splashed by the water later. On Sunday, CNN.com reported on “FHA’s Florida Fiasco,” where the collapse of the heavily FHA-insured condo market has contributed to the possibility of a FHA bailout. The FHA has now tightened its condo standards, but once again it’s a day late and possibly more than few bucks short.

The new FHA initiative is the latest in a series of efforts to “stabilize” the housing market with more subsidies. Policymakers seem oblivious that it was government interventions that helped instigate the housing meltdown to begin with. The housing market would stabilize itself if the supply of and demand for housing was allowed to be brought back into equilibrium. There would be pain in the short-term, but in the long-term we would have a smoother functioning housing market. Unfortunately, for politicians the long-term means the next election.