Obama Has United the World … in Opposition to Bad U.S. Tax Policy 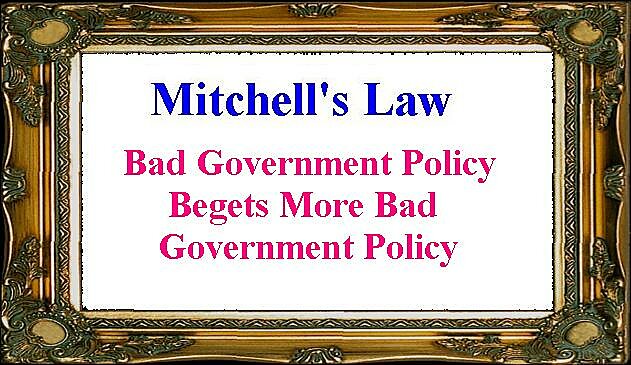 There are lots of examples of this phenomenon, such as the misguided War on Drugs being a precursor to intrusive, costly, and ineffective money laundering policies.


Or how about government healthcare subsidies driving up the price of healthcare, which then leads politicians to decide that there should be even more subsidies because healthcare has become more expensive.


But if you want a really stark example of Mitchell’s Law, the Internal Revenue Code is littered with examples.


The politicians created a nightmarishly complex tax system, for instance, and then decided that enforcing the wretched system required the erosion of civil liberties and constitutional freedoms.


The latest example of this process involves the Foreign Account Tax Compliance Act, a piece of legislation that was imposed in 2010 because politicians assumed they could collect lots of tax revenue every single year by getting money from so‐​called tax havens.

This FATCA law basically imposes a huge regulatory burden on all companies that have international transactions involving the United States, and all foreign financial institutions that want to invest in the United States. It is such a disaster that even the New York Times has taken notice, recently reporting that:

[T]he Foreign Account Tax Compliance Act, or Fatca, as it is known, is now causing alarm among businesses outside the United States that fear they will have to spend billions of dollars a year to meet the greatly increased reporting burdens, starting in 2013. American expatriates also say the new filing demands are daunting and overblown.


…The law demands that virtually every financial firm outside the United States and any foreign company in which Americans are beneficial owners must register with the Internal Revenue Service, check existing accounts in search of Americans and annually declare their compliance. Noncompliance would be punished with a withholding charge of up to 30 percent on any income and capital payments the company gets from the United States.


…The I.R.S., under pressure from angry and confused financial officials abroad, has extended the deadline for registration until June 30, 2013, and is struggling to provide more detailed guidance by the end of this year. But beginning in 2012, many American expatriates — already the only developed‐​nation citizens subject to double taxation from their home government — must furnish the I.R.S. with detailed personal information on their overseas assets.

It’s worth noting at this point that FATCA only exists because of bad tax law. If the United States had a simple and fair flat tax, there would be no double taxation of income that is saved and invested. As such, the IRS wouldn’t have any reason to care whether Americans had bank accounts and/​or investments in places such as London, Hong Kong, and Panama.


But as is so often the case with politicians, they chose not to fix bad policy and instead decided to impose one bad policy on top of another. Hence, the crowd in Washington enacted FATCA and sent the IRS on a jihad.


By the way, the New York Times was late to the party. Many other news outlets already have noticed that the United States is about to suffer a big self‐​inflicted economic wound.


Indeed, what’s remarkable about Obama’s FATCA policy is that the world in now united. But it’s not united for something big and noble, such as peace, commerce, prosperity, or human rights. Instead, it’s united in opposition to intrusive, misguided, and foolish American tax law.


Let’s look at some examples.

* From the United Kingdom, a Financial Times column warns, “This summer, the senior management of one of Asia’s largest financial groups is quietly mulling a potentially explosive question: could it organise some of its subsidiaries so that they could stop handling all US Treasury bonds? …What is worrying this particular Asian financial group is … a new law called the Foreign Account Tax Compliance Act… [T]he new rules leave some financial officials fuming in places such as Australia, Canada, Germany, Hong Kong and Singapore. Little wonder. Never mind the fact that implementing these measures is likely to be costly. …Hence the fact that some non‐​US asset managers and banking groups are debating whether they could simply ignore Fatca by creating subsidiaries that never touch US assets at all. “This is complete madness for the US – America needs global investors to buy its bonds,” fumes one bank manager. “But not holding US assets might turn out to be the easiest thing for us to do.”

* From India, the Economic Times reports, “FATCA, or the Foreign Account Tax Compliance Act, will require overseas banks to report U.S. clients to the Internal Revenue Service, but its loose definition of who is a U.S. citizen will create a huge administrative burden and could push non‐​residents to slash their U.S. exposure, some bankers say. …Bankers say the scheme will be extremely costly to implement, and some say that as the legislation stands, any bank with a client judged to be a U.S. citizen will be also obliged to supply documentation on all other clients. ‘FATCA will cost 10 times to the banks than it will generate for the IRS. It is going to be extremely complicated,’ said Yves Mirabaud, managing partner at Mirabaud & Cie and Swiss Bankers Association board member.”

* Discussing the impact in Canada, Reuters notes, “The new regulation has drawn criticism from the world’s banks and business people about its reach and costs. …‘Hundreds of millions of dollars spent on developing compliance processes to target Canadian citizens would not be a useful exercise, and they are, for the most part, people who actually have no tax liabilities because they do not earn income in the United States,’ [Canadian Finance Minister] Flaherty said.”

* A Taiwan news outlet said, “Taiwan’s domestic banks will reportedly reduce holdings of American bonds worth an estimated NT$100 billion (US$3.33 billion) due to the U.S. government’s recent decision to impose 30% tax on foreign‐​investment income in U.S. securities as bonds. Taiwan’s eight government‐​linked banks reportedly hold U.S. financial products worth over US$2 billion… On April 8, 2011, the U.S. government issued a notice advising foreign financial institutions to meet certain obligations under the Foreign Account Tax Compliance Act (FATCA), under which foreign financial institutions are subject to complex reporting rules related to their U.S. accounts.”

* From the Persian Gulf, the Bahrain Daily News noted, “A US law … has drawn the criticism of the world’s banks and business people, who dismiss it as imperialist and ‘the neutron bomb of the global financial system.’ The unusually broad regulation, known as FATCA, or the Foreign Account Tax Compliance Act, makes the world’s financial institutions something of an extension of the tax‐​collecting Internal Revenue Service—something no other country does for its tax regime. …Even the European Commission has objected, and experts say other countries may create their own FATCA‐​style regimes for US banks or withdraw from US capital markets. In a barrage of letters to the Treasury, IRS and Congress, opponents from Australia to Switzerland to Hong Kong assail FATCA’s application to a broad swath of institutions and entities.”

* A story from Singapore finds, “For many years, thousands of foreign investors have put their money into American shares or other investments. Now, however, a somewhat obscure law called the Foreign Account Tax Compliance Act (FATCA) may make investments in the United States for everyone, from billionaires to the man on the street, here in Singapore far less attractive. …[S]ome banks or investment managers may advise customers not to invest in the US. … ‘[P]rivate bankers are publicly advising their clients to clear their portfolios of all US securities’. A fund manager here told me his company is also advising clients to avoid US investments, and other companies may similarly start telling large clients as well as smaller ones the same story. Investors could then see recommendations not to invest in the US, and they may put their money elsewhere. …As consulting firm PwC said, ‘some institutions could decide that complying with the due diligence and verification provisions may not be cost effective’ so they may stop making investments in the US. Banks or other asset managers may similarly decide it is easier not to offer US investments than to try and comply with the FATCA.”

o From Switzerland, a story “about the backlash from United States expats and the financial sector to the Foreign Account Tax Compliance Act (FATCA)” reports that, “Growing numbers of American expatriates are renouncing their US citizenship over a controversial new tax law and ever more burdensome fiscal and reporting obligations. …[B]anks and business people who are supposed to enforce it on behalf of the US tax man are worried about its costly administrative burden… [I]t’s just too expensive. The consequence will be that they cut out US clients and stop investing in the US. …Three or four years ago no one talked about renouncing nationality – now it’s an open discussion. That’s a major shift in mentality.

o Writing about the reaction from Europe, one columnist noted, “FATCA encourages foreign financial institutions to limit their exposure to U.S. assets. In a joint letter to the Treasury and the IRS, the European Banking Federation and the Institute of International Bankers, which together represent most of the non-U.S. banks and securities firms that would be affected by FATCA, warned that ‘many [foreign financial institutions], particularly smaller ones or those with minimal U.S. investments or U.S. customers, will opt out of U.S. securities rather than enter into a direct contractual agreement with a foreign tax authority (the IRS) that imposes substantial new obligations and the significant reputational, regulatory, and financial risks of potentially failing those obligations.’ A widespread divestment of U.S. securities by institutions seeking to avoid the burdens of FATCA could have real and harmful effects on the U.S. economy.”

These press excerpts help demonstrate the costs of FATCA, but what about the benefits? After all, maybe the law will lead to lots of good results that offset the high regulatory costs and lost investment for the American economy.


Well, the only “benefit” anybody had identified is that FATCA will transfer more money from the productive sector of the economy to the government. Indeed, Obama argued during the 2008 campaign that cracking down on “tax havens” with proposals such as FATCA would give politicians lots of additional money to spend.


But when the legislation was approved in 2010, the Joint Committee on Taxation estimated that the new law would raise only $8.7 billion over 10 years, not the $100 billion that Obama claimed could be collected every single year. This video has some of the damning details.

Jeffrey Owens, a tax expert at the Organization for Economic Cooperation and Development, said catching tax evaders was “a concern that many member countries share.” If countries could agree to new global reporting standards for exchanging information, he said, then “maybe there’s a way forward.”

In other words, the pinhead bureaucrats at the OECD think FATCA’s such a swell idea that they want to create a global network of tax police. So not only would America erode the sovereignty of other nations because of our bad tax law, but those other nations would be able to impose their bad tax law on income earned in America!


And just in case you think that’s just irresponsible demagoguery, it’s already beginning to happen. Check out this IRS regulation, proposed by the Obama administration, that would require American banks to put foreign law above American law.