Note to Larry Summers: The Government Borrows for Transfer Payments, Not Investment

“It is time for governments to borrow more money,” according to former treasury secretary Larry Summers.  He is not peddling this advice to Greece and Spain, but to countries like the United States and Japan that can still sell long-term bonds at very low interest rates. Summers urges the United States, in particular, to borrow more for “public investment projects” that are presumed to raise the economy’s future output. He offers the hypothetical example of “a $1 project that yielded even a permanent 4 cents a year in real terms increment to GDP by expanding the economy’s capacity or its ability to innovate.”

Even if such promising projects were easy to find, however, that is not the way the current government has been inclined to spend borrowed money. Despite all the rhetoric about “shovel-ready projects,” about 95 percent of the 2009 stimulus bill consisted of government consumption (salaries), refundable tax credits, and transfer payments which, as Robert Barro notes, “dilute incentives to work.”

Summers says, "Any rational chief financial officer in the private sector would see this as a moment to extend debt maturities and lock in low rates — the opposite of what central banks are doing." Locking-in low borrowing costs would indeed make sense if the money from selling long bonds were used to retire short-term Treasury bills, but that would not involve borrowing more as Summers proposes.

For both government and households, it is certainly more prudent to use borrowed money to finance investments that will yield a stream of income in the future—either actual income (such as toll roads) or implicit income (the benefits from living in a mortgaged home).

Apostles of the Keynesian doctrine, such as Larry Summers, Paul Krugman, and Alan Blinder, invariably use hypothetical public works examples to make the case for more and more national (taxpayer) debt. Keynesian forecasting models, used by the Congressional Budget Office (CBO) to warn of the looming fiscal cliff and defend the fiscal stimulus of 2009, likewise assume the highest “multiplier” effect from tangible government investments.

In the real world of politics, however, Congress and the White House use borrowed money to placate constituencies with the most political clout. Federal spending on investment projects has essentially nothing to do with the huge 2009-2012 budget deficits (only 29 percent of which can be blamed on the legacy of recession, according to the CBO).

The Table shows that transfer payments and subsidies account for 63.8 percent of estimated spending in 2012, while federal purchase 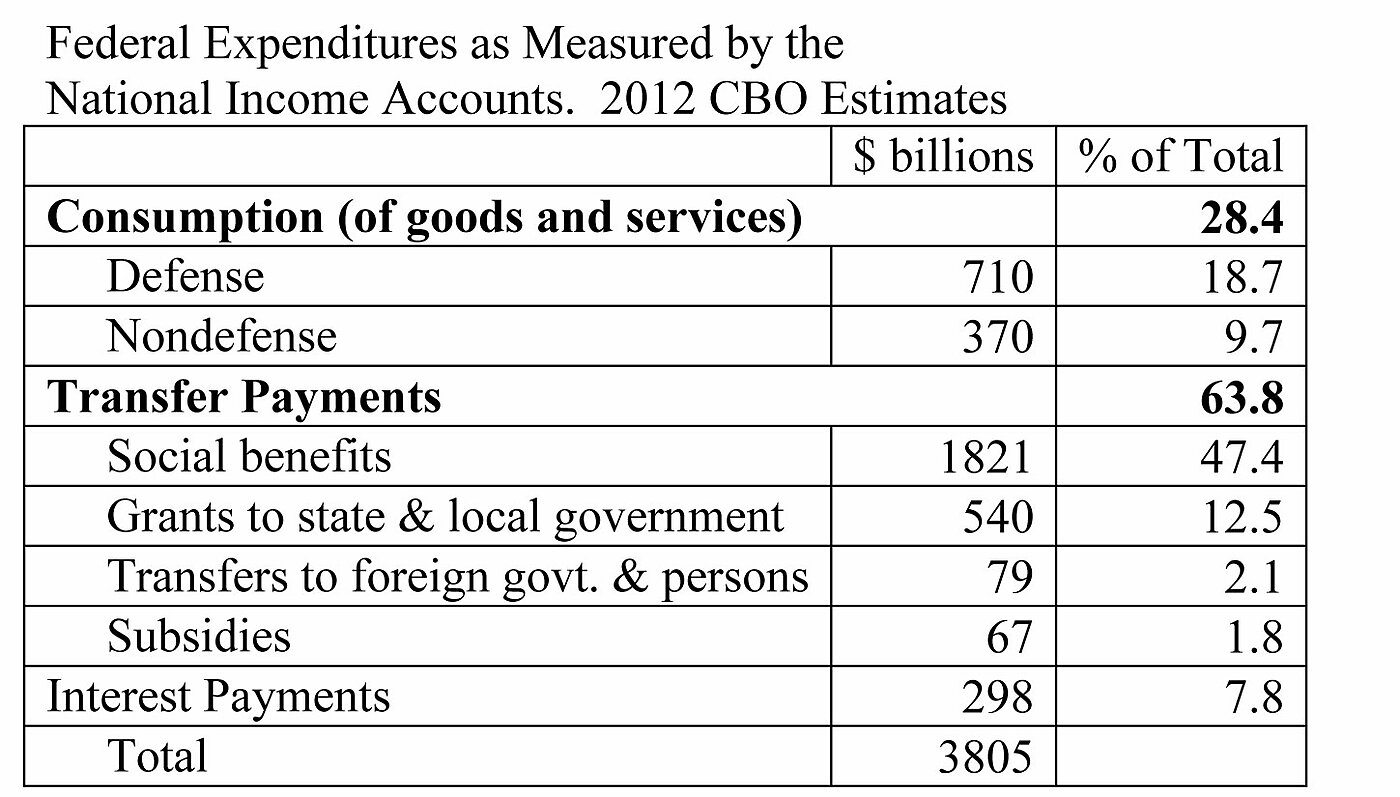 s account for 28.4 percent. Also, most federal aid to states is for transfer payments like Medicaid.  Within federal purchases, only 7.6 percent of the spending ($152.5 billion) was counted as gross investment in the first quarter GDP report, and two thirds of that was military equipment and buildings. Net investment, minus depreciation, is smaller still.

If borrowing more for investment was a genuine political priority, rather than an academic conjecture, the government could do that by borrowing less for government payrolls, transfer payments, and subsidies.  At best, Larry Summers has made an argument for spending borrowed money much differently, not for borrowing more.