Not the Change We Hoped For 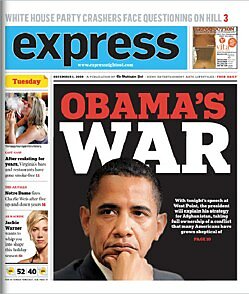 Barack Obama first became a credible presidential candidate on the basis of his antiwar credentials and his promise to change the way Washington works. But he has now made both of George Bush’s wars his wars. The Washington Post’s front‐​page analysis began, “President Obama assumed full ownership of the war in Afghanistan on Tuesday night…” The cover of the tabloid D.C. Express was even more blunt.


President Obama promises that after all this vitally necessary and unprecedented federal spending, he will turn his attention to constraining spending at some uncertain date in the future. And now he says that he will first put more troops into Afghanistan, and then withdraw them at some uncertain date in the future (“in July of 2011,” but “taking into account conditions on the ground”). Voters are going to be skeptical of both promises to accelerate and then put on the brakes later.


Of course, John McCain thinks that even a tentative promise to get out of this war after a decade is too much. “Success is the real exit strategy,” he says. And if there’s no success? Then presumably no exit. Antiwar voters may still find a vague promise of getting the troops out of Afghanistan three years after the president’s inauguration preferable to what a President McCain would have promised.


But as Chris Preble wrote yesterday, this increase of 30,000 troops — or 40,000 — is not going to win the war. The U.S. military’s counterinsurgency doctrine says that stabilizing a country the size of Afghanistan would require far more troops than anyone is willing to invest. So why not declare that we have removed the government that harbored the 9/11 attackers, and come home?


The real risk for Obama is becoming not JFK but LBJ — a president with an ambitious, expensive, and ultimately destructive domestic agenda, who ends up bogged down and destroyed by an endless war. Congress should press for a quicker conclusion to both wars.