Another city has discovered that light rail is not the road to utopia. In 2007, Norfolk, Virginia decided to revitalize its downtown by building a rail transit line. That line is now 45 percent over budget and its opening has been delayed by more than 16 months. 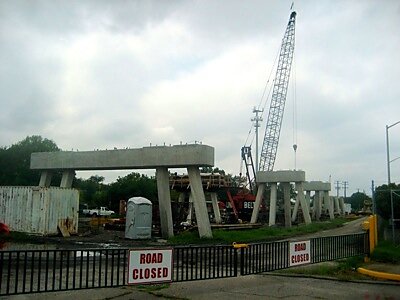 When Flickr user DearEdward took this construction photo in July, 2008, Norfolk officials were promising to open the light-rail line in December, 2009 at a cost of $232 million. Now the cost has grown to $338 million and the opening delayed to late in 2011.

A 45-percent cost overrun is about average for rail transit construction, but it has hit Norfolk particularly hard. In 2007, the Federal Transit Administration agreed to fund 72 percent of the then-projected $232 million cost, with the Commonwealth of Virginia and city of Norfolk each funding about half the remainder. Since the feds did not agree to cover any of the cost overruns, the overruns represent a near-tripling of the costs to state and city taxpayers.

Furious about the unexpected costs and delays., the Hampton Roads Transit board (which consists of city councilors from the cities the agency serves) forced the agency's general manager to retire. A month ago, a state audit found that the Norfolk city manager and transit planners knew about the cost overrun long before they bothered to tell the city. As a result, both the city manager and the agency's agency's head planner resigned this week.

On top of cost overruns are construction delays. Originally scheduled to open to the public in December 2009, opening was delayed until May 2011. But now the transit agency admits it won't even meet that date and can't say when it will open.

Meanwhile, far from becoming a place "where people can work, shop, eat, and play," Norfolk's downtown now features "hundreds of empty condos, apartments, and storefronts." The latest news is that a major supermarket is closing after a mere three years in business. While the truth is that the relative handful of people who are expected to ride the light-rail line are not enough to revitalize any downtown, lengthy construction delays certainly don't help.

The best thing Norfolk might do now is to abandon the light-rail line and dedicate the $10 million or so that it will cost to subsidize rail operations to improving bus service in the city and its surroundings. Unfortunately, doing so means that it would have to refund the federal government the $168 million that it contributed to the line. As a result, city taxpayers will have to throw good money after bad by funding tens of millions in operating subsidies for the next several decades.