When it comes to reining in federal spending, House Republicans and the president have one idea in common: freezing nondefense discretionary spending. That category accounts for about 18 percent of total spending, so let’s see how such a freeze would affect the overall budget.


Today the Congressional Budget Office released updated budget figures and baseline projections of federal spending through fiscal 2021. Projecting the budgetary future is obviously an inexact science, and the CBO’s baseline reflects unrealistic assumptions. However, it does allow us to get an idea of the impact of a nondefense discretionary freeze on total federal spending.


Three proposals have been put forward:

Using the CBO’s latest figures, I calculated baseline spending from fiscal 2012–2021 under ten year freezes in nondefense discretionary spending at fiscal 2006, 2008, and 2010 levels: 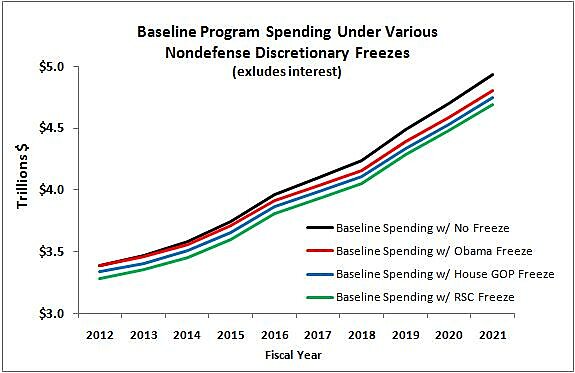 Note: To make an apples‐​to‐​apples comparison, I extended the proposed Obama freeze at fiscal 2010 levels from five years to ten years, and I assumed a ten year freeze at fiscal 2008 levels for the House Republicans. Also, projected annual interest payments on the debt are excluded. Therefore, the chart refers to “baseline program spending,” which is the sum of nondefense discretionary, defense, and entitlement spending.


The chart makes it excruciatingly clear that freezing nondefense discretionary spending at the levels specified or implied by Republicans and Democrats is only a start toward needed reforms in the federal budget. Congress also needs to cut defense spending, and spending on Social Security, Medicare, Medicaid, and other entitlement programs.