Wall Street Journal columnist E.S. Browning presents a graph titled “Wages Still Soft … hourly wage gains have been sluggish.” It shows the percentage change in average hourly earnings from a year earlier. That rate of change slowed from about 3.5 percent in early 2009 to 1.5 percent in late 2012 before rising to 2.2–2.4 percent in recent months. The upside, in Browning’s view, is that “wage gains still aren’t big enough to push inflation higher.” In reality, wage gains never push inflation higher, but inflation can certainly push real wages lower.


The trouble with Browning’s graph is that it shows only changes in nominal earnings – unadjusted for the huge drop in inflation after July 2008 when the year‐​to‐​year increase in consumer prices reached 5.5 percent in July 2008 (up from 1.9 percent in August of 2007). Nominal wage gains miss the real story.


In the graph shown below, I adjust the same hourly earnings figures for inflation by using the PCE deflator. Note that real earnings rose rapidly when inflation dropped to zero or less in 2009 – when Browning’s chart begins. But employers could not afford to pay rising wages when their prices were falling, so employment collapsed. 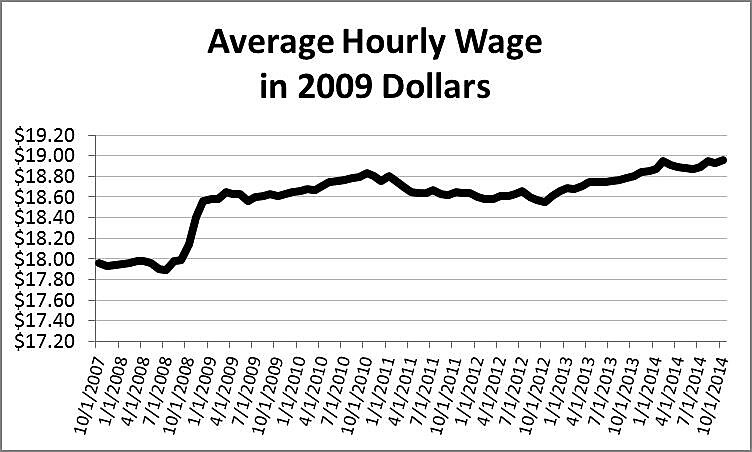 Measured in 2009 dollars, real average hourly earnings for production and nonsupervisory workers have been rising slowly but surely for two years — from $18.55 in October 2012 to $18.95 in October 2014, or 1.1 percent a year. That’s not so terrible considering the slow pace of growth of GDP and productivity.


Despite hazardous chatter from the likes of Paul Krugman and Larry Summers about U.S. inflation being too low, the truth is that low inflation has been raising U.S. real wages even as confused politicians and journalists erroneously bemoan slow growth in nominal wages.