The award of the Nobel Peace Prize to the Indian activist Kailash Satyarthi is bound to attract public attention to the problem of child labor. In 1980, Satyarthi founded the Bachpan Bachao Andolan, or "Save the Childhood Movement," focused on fighting child labor and human trafficking, as well as bonded labor.

Child labor is widespread in developing countries, concentrating often in the agricultural sector where working conditions are particularly dire. Because of the gravity of the problem, it is necessary to be extremely careful in devising solutions. As is often the case, the fix to child labor that most people would think of instinctively—namely, to ban it—could do more harm than good. As another Nobel laureate, Paul Krugman, wrote in a New York Times opinion piece in 2001,

In 1993, child workers in Bangladesh were found to be producing clothing for Wal-Mart, and Senator Tom Harkin proposed legislation banning imports from countries employing underage workers. The direct result was that Bangladeshi textile factories stopped employing children. But did the children go back to school? Did they return to happy homes? Not according to Oxfam, which found that the displaced child workers ended up in even worse jobs, or on the streets—and that a significant number were forced into prostitution.

There are no quick and easy answers to the problem of child labor, especially in poor countries where educational opportunities are limited and where bans on child labor simply displace children into less desirable, illegal, and more dangerous occupations. To end child labor, the currently underdeveloped countries must create economic opportunities that would reduce or eliminate the reliance of many, particularly poorer, families on income from the work of their children. In a recent Cato Economic Development Bulletin, the economist Benjamin Powell argues that

The main reason children do not work in wealthy countries is precisely because they are wealthy. The relationship between child labor and income is striking. Using the same World Bank data on child labor participation rates we can observe how child labor varies with per capita income. Figure 2 divides countries into five groups based on their level of per capita income adjusted for purchasing power parity. In the richest two-fifths of countries, all of whose incomes exceed $12,000 in 2010 dollars, child labor is virtually nonexistent. 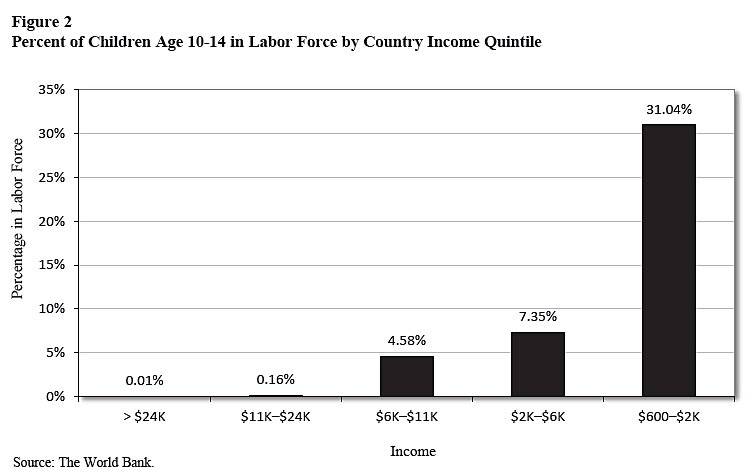 The thought of children laboring in sweatshops is repulsive. But that does not mean we can simply think with our hearts and not our heads. Families who send their children to work in sweatshops do so because they are poor and it is the best available alternative open to them. The vast majority of children employed in countries with sweatshops work in lower-productivity sectors than manufacturing. Passing trade sanctions or other laws that take away the option of children working in sweatshops only limits their options further and throws them into worse alternatives. Luckily, as families escape poverty, child labor declines. As countries become rich, child labor virtually disappears. The answer for how to cure child labor lies in the process of economic growth—a process in which sweatshops play an important role.