No, Global Warming Doesn’t Lead to More Snow in Boston

As the snow keeps piling up in Boston, so does the climate change nonsense. Never letting a good weather story go to waste, our nation’s scribes are in high dudgeon that global warming is causing the serial burial of Boston.

We discussed the illogic (or at least the selective reasoning) behind the global-warming-made-this-snowstorm-worse excuses forwarded during the first big nor’easter to wallop the area (back on January 27th), and now, after the third big event (with likely more to come!) the din is deafening. Just today there are major stories in USA Today and the Washington Post strongly suggesting that global warming enhances snowfall in New England.

Perhaps we can test this hypothesis, glibly hiding as a fact.

Back in the late 1990s, we were involved in a research project investigating the relationship between winter temperature and winter snowfall across Canada. Our results were published in the peer-reviewed Journal Geophysical Research back in 1999.  We weren’t investigating the meteorology of any one specific storm, but rather the climatology (i.e., the general relationship) of temperature and snowfall, looking to see if there were really places that were “too cold to snow” and whether a warming climate might result in more snowfall, or precisely what is being presented as fact today.

Here is the context of our investigations:

If one accepts the projections of most climate models that future temperatures will increase in winter in the middle and high latitudes [Houghton et al., 1996], the higher temperatures could have two different impacts on the liquid water equivalent of snowfall: (1) Total snowfall could increase with increasing air temperature since the Clausius-Clapeyron relationship dictates that saturation vapor pressure increases exponentially as a function of temperature, thereby allowing for the possibility of a more moist atmosphere, or (2) total snowfall could decrease with increasing air temperature as warmer conditions would increase the amount of precipitation that falls as rain (or mixed precipitation) relative to snow.

Note that the global warming press as of late only focuses on possibility number 1. Except during winters when it doesn’t snow, when they shift their focus to number 2.

Figure 1 shows what we found after examining 50 years of data for locations all across Canada. 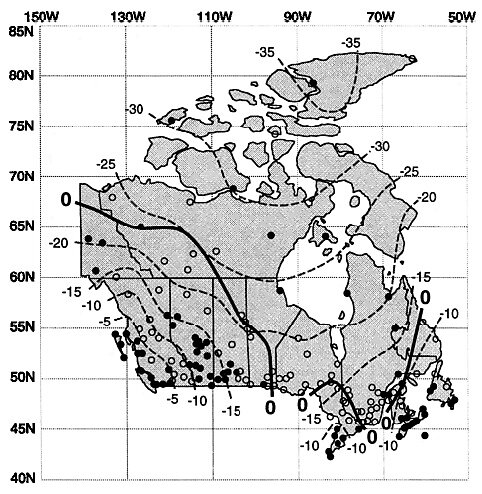 Although U.S. stations weren’t part of our study, it is pretty clear via visual extrapolation what is most likely going on in the lower 48. Nowhere does the “0” line extend to the Atlantic coast. In fact, it barely extends into New England at all. In other words, the temperature/snowfall relationship along the entire Atlantic coast of the U.S. is negative—on average, the warmer it is, the less it snows.

In order to further those who are thriving in a fact-free environment, we present, in Figure 2, a scatterplot of winter snow versus winter temperature in Boston. What we surmised above is, in fact, the case.  Warm years tend to be low-snow years and vice-versa. 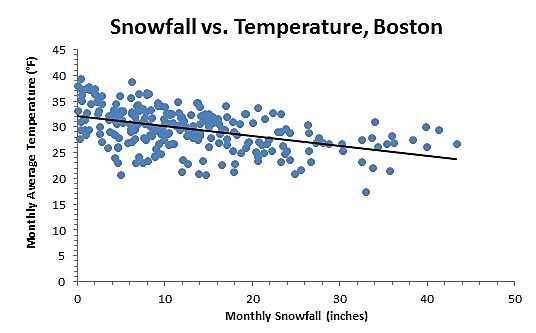 Unless human-caused global warming is going to lead to lower than normal winter temperatures in New England (hint: it isn’t), then less snow there is what is “consistent with” global warming.

While you could argue until your blue in the face as to whether or not the snow totals from a specific nor’easter storm event impacting the Northeastern U.S. were enhanced because of global warming, the big picture is much clearer—a warmer climate will lead to less snowfall there on average.

If/when such an impact actually becomes detectable, though, is still, well, up in the air.