According to press reports, the president will roll out a $300 billion stimulus package “jobs plan” this week. The plan will contain additional subsidies for state and local government, including money for school construction.


My colleagues Adam Schaeffer and Andrew Coulson have explained that money to build schools is one of the last things that the government school system needs (see here and here). There will probably be money for “hiring teachers” and other targets that the administration thinks will play well with the electorate – not to mention government employee unions.


The electorate – and reporters covering the president’s plan – should understand that subsidies to state and local government have gone through the roof since 2000: 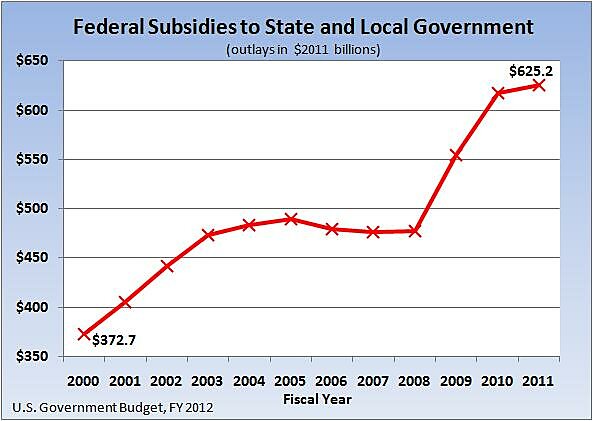 A Cato essay on federal aid to state and local government explains why these subsidies should be abolished, not increased. The following are five fundamental reasons:


1. Subsidies undermine constitutional federalism. The federal government should handle only those issues that are truly national in scope, such as defending the country from attack. The Constitution assigned the federal government specific limited powers, and the 10th Amendment clearly states that “The powers not delegated to the United States by the Constitution, nor prohibited by it to the States, are reserved to the States respectively, or to the people.”


2. Subsidies destroy the concept of the states being “laboratories of democracy.” The beauty of “fiscal federalism” is that it allows the states to experiment and figure out what does and doesn’t work. It also allows citizens to live in a state with policies that match their preferences. Federal subsidies stifle this experimentation and limit the choices available to citizens.


3. Subsidies fuel burdensome regulations and bureaucratic waste. The federal government creates countless regulatory hoops that the states have to jump through in order to get the federal handouts. The rules and regulations naturally spark an explosion in bureaucracy at all levels of government. When I was a budget official in the state of Indiana, I saw firsthand the federal and state taxpayer money being wasted trying to administer programs funded with federal dollars.


4. Subsidies misallocate taxpayer resources. Federal aid misallocates resources because the money is distributed on the basis of political, rather than economic, considerations. Congress uses complex formulas to disburse money to the states that ensure that just about everyone gets a piece of the pie. Spreading the largesse across many congressional districts and states helps secure the votes necessary to ensure that the programs are continued. For example, federal community development subsidies were originally intended for poor areas, but now the money goes to poor, middle‐​class, and rich areas alike.


5. Subsidies breed irresponsibility and waste. Federal politicians and bureaucrats waste a lot of money for the simple reason that it isn’t their money. Federal subsidies exacerbate the problem at the state and local level: not only are state and local officials playing with other people’s money – they’re playing with money that they didn’t have to tax from their citizens. And because state and local citizens weren’t taxed to pay for these federally funded activities, they have less incentive to pay attention to how the money is spent.