Is Newt Gingrich Drawing on Camus or Carl Schmitt?

Andrew Sullivan points us to this report that Newt Gingrich is going to tell an audience at AEI that the Obama administration is engaging in “willful blindness” and “self‐​deception” about the threat posed to the United States by Islam. In the wake of his remarks urging the United States to emulate Saudi Arabian standards of religious freedom, Gingrich has promised to deploy “the lessons of Camus and Orwell” to illuminate our present predicament. 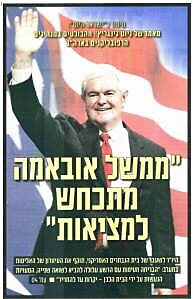 “Evading the confrontation with Evil may bring a second Holocaust. The mistakes made by the White House will exact a terrible price.”[/caption]


What’s interesting is that this sort of thing is a long‐​standing trope in Gingrich’s rhetorical repertoire, although he has reserved it mostly for Israeli audiences. In 2007, Gingrich went to Israel and informed a group gathered at the Herzliya Conference that Israel was facing the prospect of a “second Holocaust.” Perhaps drawing on the lessons of Habermas, Gingrich explained that

We don’t have right language, goals, structure, or operating speed, to defeat our enemies. My hope is that being this candid and direct, I could open a dialogue that will force people to come to grips with how serious this is, how real it is, how much we are threatened. If that fails, at least we will be intellectually prepared for the correct results once we have lost one or more cities.

This year, Gingrich published a commentary in a right‐​wing Israeli tabloid owned by Sheldon Adelson repeating these arguments, with the paper promising readers that

The behavior of the Obama administration regarding Iran and terror is characterized by a complete disconnect from reality. Gingrich, a prominent Republican Party leader, warns that the Western Elites are evading a confrontation with Evil and that the flight from reality could bring a second Holocaust to the Jewish People. An alarm bell, before it’s too late.

Israel faces a range of important international security problems. Israelis have much more reason to be concerned about their national security than do Americans. And it’s entirely reasonable that people would disagree about the nature and breadth of the threats to Israel, let alone what to do about them. But this sort of thing is absolutely irresponsible. I find it striking that Gingrich has repeatedly lectured Israeli audiences and informed them–presumably based on his knowledge as a Washington insider–that his own government’s policy threatens a second Holocaust on the Jewish people. Is this a view he really holds? If so, I would think he would be much more alarmed than he is acting at present.


While Gingrich is claiming that his current proclamations are grounded in Orwell and Camus, it seems to me that his overall Friend‐​Enemy politics of late owe a good bit to Carl Schmitt.