Section 230 of the Communications Decency Act is much debated and under bipartisan attack. The legislation, which includes the “26 words that created the Internet,” is attacked from the right by those who complain about alleged “Big Tech” anti‐​conservative bias and from the left by those bemoaning the spread of extremist content. Accordingly, Section 230 has been the topic of much discussion in newspaper pages. Unfortunately, the Fourth Estate has recently allowed misinformation about Section 230 to spread, which is especially regrettable given that falsehoods about Section 230 are already ubiquitous.


The most recent example of such misinformation is an op‐​ed in The Wall Street Journal by the conservative commentator and Prager University founder Dennis Prager. The first falsehood appears in the subhed: “Big tech companies enjoy legal immunity premised on the assumption they’ll respect free speech.”


This is not true. Congress did not pass Section 230 on the understanding that Internet companies would engage in minimal moderation and “respect free speech.” In fact, §230(c)(2)(A) of the CDA states the following:

No provider or user of an interactive computer service shall be held liable on account of any action voluntarily taken in good faith to restrict access to or availability of material that the provider or user considers to be obscene, lewd, lascivious, filthy, excessively violent, harassing, or otherwise objectionable, whether or not such material is constitutionally protected.” (emphasis mine).

This portion of Section 230 explicitly states that companies as large as Facebook and those as small as a local bakery that includes a comments section on its WordPress site can take “any action” to remove content they consider objectionable. I am at a loss trying to figure out where Prager got the idea that Section 230 was premised on Internet companies respecting “free speech.” It’s possible that he’s considering one of Section 230’s findings:

The Internet and other interactive computer services offer a forum for a true diversity of political discourse, unique opportunities for cultural development, and myriad avenues for intellectual activity.

While this finding emphasizes the value of the Internet as an ecosystem capable of hosting a diverse range of political views, it does not encourage specific sites to adopt politically neutral content moderation policies. Nor does it make such neutrality a necessary condition for Section 230 immunity.


We should keep in mind that oped page contributors rarely write their own subheds. But Prager makes the point explicitly in his oped’s text:

The clear intent of Section 230—the bargain Congress made with the tech companies—was to promote free speech while allowing companies to moderate indecent content without being classified as publishers.


But Google and the others have violated this agreement. They want to operate under a double standard: censoring material that has no indecent content—that is, acting like publishers—while retaining the immunity of nonpublishers.

There was no such agreement or bargain. Section 230 was passed in an explicit attempt to encourage moderation of speech. This portion of Prager’s oped also raises another myth that abounds in Section 230 debates: the “platform” vs. “publisher” distinction.


There is no legal difference between a “platform” and a “publisher.” Indeed, publishers enjoy Section 230 protection. The Wall Street Journal is a publisher and can be held liable for defamatory content oped contributors write. But The Wall Street Journal also hosts moderated comment sections, which do enjoy Section 230 protection. The comments section below Prager’s oped says as much. 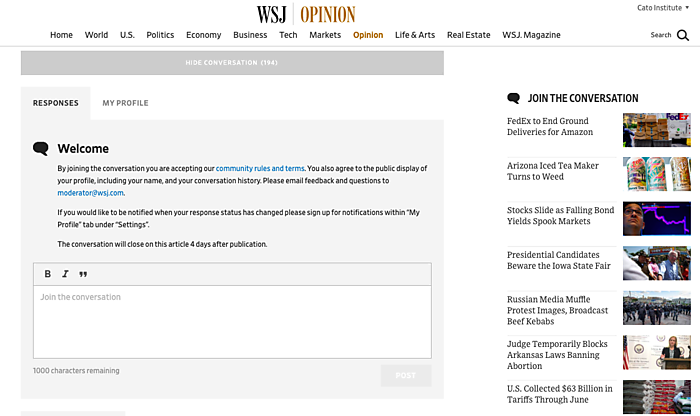 When Prager writes, “But Google, YouTube and Facebook choose not to be regarded as ‘publishers’ because publishers are liable for what they publish and can be sued for libel” he is making a significant error. Google, Youtube, and Facebook did not “choose” to not be considered publishers. Social media sites don’t “choose” not to be regarded as publishers. CDA§230(c)(1) makes the decision for them:

No provider or user of an interactive computer service shall be treated as the publisher or speaker of any information provided by another information content provider.

These “26 words that created the Internet” include no provision that allows social media site to “choose” whether they’re “publishers” or “platforms.”


Section 230 was passed to encourage Internet companies to moderate user content and does not classify such companies as “publishers” or “platforms.”


Prager’s last important claim is that the fact that Youtube users who have opted into “restricted mode” can’t access dozens of Prager U videos because of an anti‐​conservative bias at Youtube. This claim doesn’t withstand scrutiny. Research by NetChoice demonstrates that that only 12 percent of Prager U’s videos are in “restricted mode,” compared to 54 percent of Daily Show videos and 71 percent of Young Turks videos. Prager may be correct to point out that these videos are restricted because of expletives, but expletives aren’t the only kind of content that can result in videos being restricted. “Mature subjects,” “violence,” and “sexual situations” can also result in videos being unavailable to users in restricted mode. Anyone who takes a look at Prager U’s Youtube channel can see content that would understandably put it out of reach of users who have opted into “restricted mode.”


It’s bad enough to get the facts of Section 230 wrong. Spreading falsehoods in pursuit of an agenda that isn’t supported by what the facts reveal is worse.


Dennis Prager is the most recent proliferator of Section 230 misinformation, but he’s hardly the only one.


Yesterday, The New York Times published a Section 230‐​heavy article which featured on the front page of its business section. The headline read: “Why Hate Speech on the Internet Is a Never‐​Ending Problem.” To its credit, The New York Times has since issued a correction and fixed the headline. As I discussed above, Section 230 doesn’t protect hate speech per se. You can thank the First Amendment for that. Rather, it allows companies to remove speech that violates their content moderation rules without becoming liable for everything posted by users. Footage of a white nationalist murdering someone would run afoul of Facebook’s content moderation policy, but it might be left up by moderators of a neo‐​nazi forum. Section 230 allows Facebook to remove the footage, which is legal under the First Amendment.

Social media companies have leveraged Section 230 to great effect, and astounding profits, by claiming they are platforms — not publishers — thereby avoiding under the law billions of dollars in potential copyright infringement and libel lawsuits.

Kirk’s comment on Section 230’s interaction with copyright law is the opposite of the truth. Section 230(e)(2) reads:

Nothing in this section shall be construed to limit or expand any law pertaining to intellectual property.

At the time of publication neither The Washington Post nor The Wall Street Journal have issued corrections, editorial notes, or retractions related to the Prager or Kirk opeds.


Useful policy debates only happen when participants can agree on facts. Sadly, some of the most reputable newspapers in the country have allowed for misinformation about an important piece of legislation to spread without correction. Anyone hoping for the quality of Section 230 debates to improve any time soon will be disappointed.