New York Governor Andrew Cuomo is saying that the state will “have to raise taxes” to close its budget deficit. But New York does not “have to” do that at all. Instead, it can and should cut spending.

As a share of income, New York state and local taxes are already the highest in the nation. Cuomo received an “F” on Cato’s fiscal report for his tax and spending increases.

So rather than raising taxes again, New York leaders should study why their government costs twice as much as Florida’s and find ways to make government leaner and more efficient. 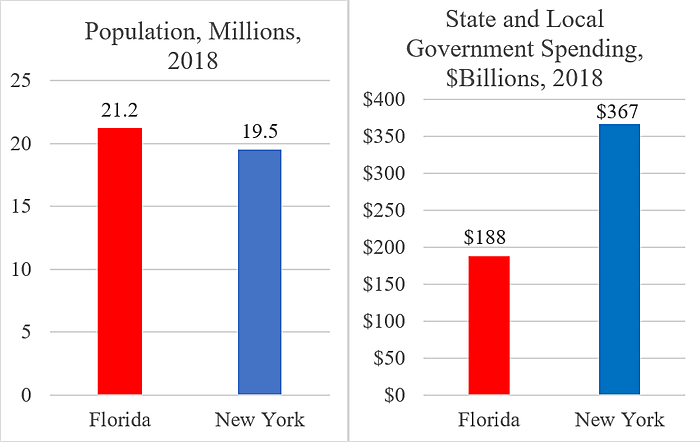 Spending twice as much on the government is staggering. High spending means high taxes, and that is partly why New Yorkers are leaving the state in droves for Florida and other lower‐​tax states.

The drain of people and business out of New York is killing the state. The more they raise taxes, the more move out, and the more the tax base shrinks. It’s a vicious cycle, and the only way out is to downsize the government.

What does New York spend all that money on?

New Yorkers enjoy less personal freedom than residents of any other state, so they are paying more to be less free.

Threatening more tax hikes is a damaging cop out. It won’t solve any problems and just prompt more people to leave. New York leaders should serve the public for a change and reform government to cut costs.