New York vs. Florida on Bureaucracy

New York and Florida have similar populations of 20 million and 21 million, respectively. But state and local governments in New York spent twice as much ($348 billion) as governments in Florida ($177 billion), as discussed here.

New York’s excess includes spending more on handouts such as welfare. Another cause of New York’s high spending is employment of more government workers and paying them more than in Florida. We can examine this factor using Census data for 2018.

In the table below on the left are the numbers of state and local workers measured in full‐​time equivalents. New York governments employ 34 percent more workers than Florida governments. Caution is in order because for some functions the state differences may reflect whether services are provided in‐​house or contracted‐​out. Solid waste management may be an example of such a difference.

That said, the New York worker count in some areas seems inordinately large. The two states have similar K-12 school enrollments of 2.7 million in New York and 2.8 million in Florida. But New York employs 31 percent more teachers and administrators than Florida. Do the 111,000 extra staff in New York generate better school outcomes? Apparently not—this Cato study puts Florida near the top and New York in the middle on school quality.

Does New York really need two times more highway workers than Florida and three times more welfare workers? If I was a New York taxpayer, I would want my political leaders to justify such differences.

The columns on the right show average annual wages, which I estimated by multiplying the Census March payroll data by twelve. Government workers in New York make 42 percent more in wages than government workers in Florida, on average. Perhaps that makes sense because New York generally has a higher cost of living than Florida. However, it is also true that many New York government workers are in Albany and in local governments outside of high‐​cost Manhattan. 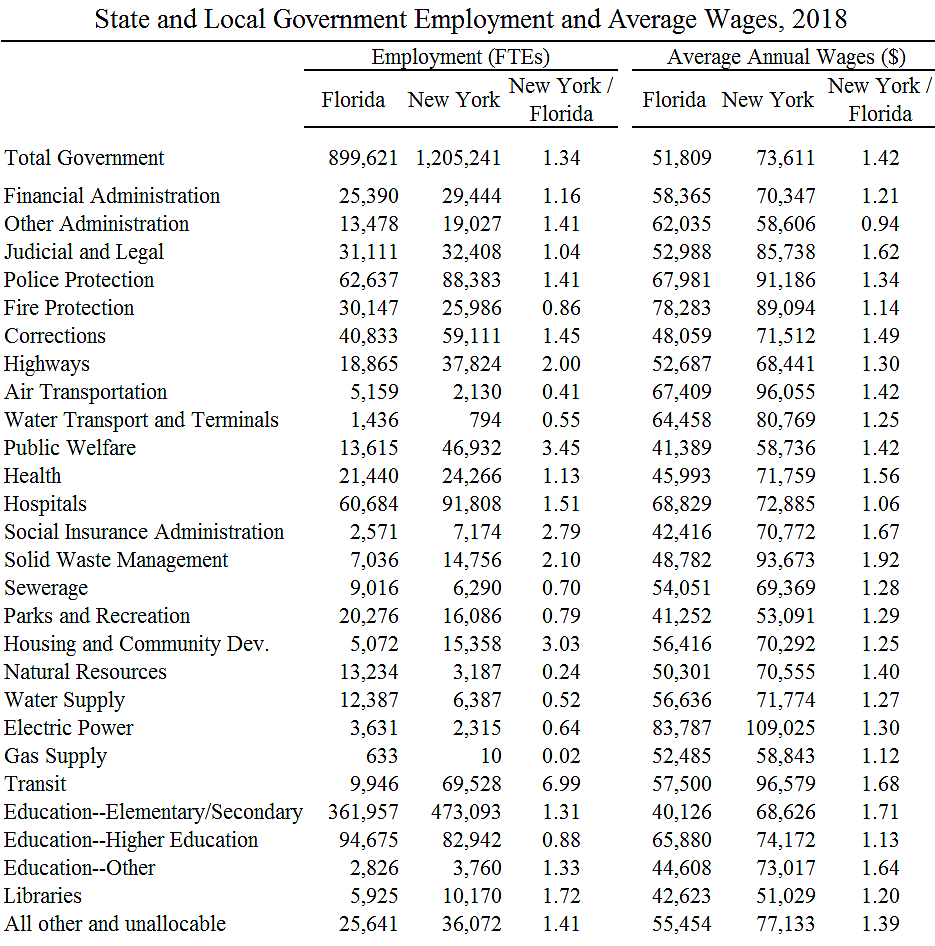