I reported that state and local governments in New York spend twice as much as governments in Florida. New York also has a larger bureaucracy. Carl Campanile of the New York Post reported on these findings yesterday and captured a retort from the office of New York Governor Andrew Cuomo:

“Sounds like this ginned‐up study from a group of right-wing 19th century robber baron wannabes fail to mention that New York is Washington’s favorite ATM, paying $26.6 billion more in federal taxes than we get back while Florida receives $45.9 billion more than it pays,” said Cuomo senior adviser Rich Azzopardi. “Get a calculator.”

Actually, I am familiar with the “balance of payments” data Azzopardi refers to, and back in the 1990s aided then New York Senator Daniel Patrick Moynihan with such calculations. New York has long paid more to Washington in taxes than it receives back in federal spending on social programs, contracts, grants, and federal wages.

New York’s Rockefeller Institute has done the latest calculations. It found, “New York’s overall balance of payments remains the least favorable of any state in the nation.” Why does New York get such a raw deal? The Institute found, “New York’s consistently negative balance of payments is driven primarily by the disproportionate amount of federal taxes paid, rather than relatively lower federal spending received.”

But here’s the thing: New York politicians have done nothing about it! New York politicians should be leading the charge against the unfair soak‐​the‐​rich federal income tax. Instead, most House and Senate members from New York are liberals who cheerlead for progressive taxation, and thus who work in the federal legislature to undermine their own state.

Since New York gets such a raw deal from federal fiscal relations, New York politicians should be the ones trying to revive federalism by shrinking federal spending and transferring activities back to the states. I argue here that such devolution would be good for every state, but it would particularly benefit states such as New York that pay so much in federal taxes.

Finally, note that New York’s balance of payments problem is no excuse for the gross inefficiency of its government compared to that of Florida. Rather than griping about Cato Institute data, Cuomo and Azzopardi should be grabbing their calculators and finding savings in the state’s bloated budget. 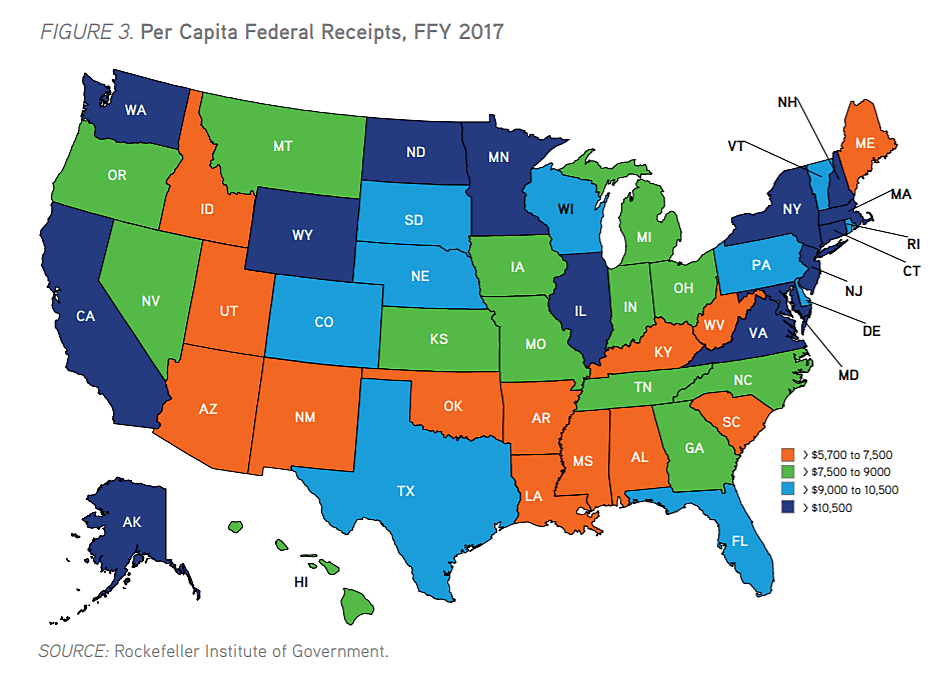