I'm very leery of corporate tax reform, largely because I don't think there are enough genuine loopholes on the business side of the tax code to finance a meaningful reduction in the corporate tax rate.

That leads me to worry that politicians might try to "pay for" lower rates by forcing companies to overstate their income.

Based on a new study about so-called corporate tax expenditures from the Government Accountability Office, my concerns are quite warranted.

The vast majority of the $181 billion in annual "tax expenditures" listed by the GAO are not loopholes. Instead, they are provisions designed to mitigate mistakes in the tax code that force firms to exaggerate their income.

Here are the key findings.

Sounds innocuous, but take a look at this table from the report, which identifies the "seven largest corporate tax expenditures." 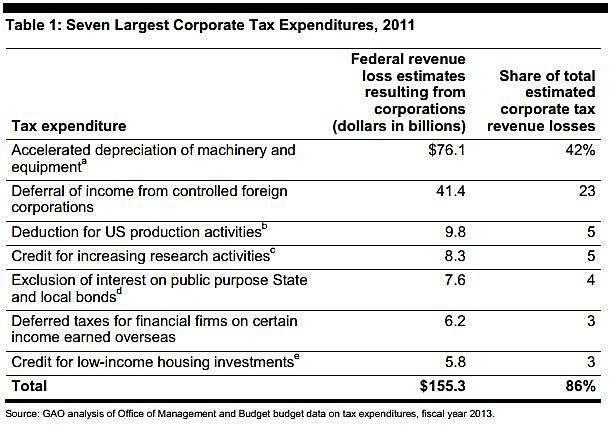 To be blunt, there's a huge problem in the GAO analysis. Neither depreciation nor deferral are loopholes.

I wrote a detailed post explaining depreciation earlier this month, citing three different experts on the issue. But if you want a short-and-sweet description, here’s how I described depreciation in my post on corporate jets.

If a company purchases a jet for $20 million, they should be able to deduct – or expense – that $20 million when calculating that year’s taxable income… A sensible tax system defines profit as total revenue minus total costs – including purchases of private jets. But today’s screwy tax code forces them to wait five years before fully deducting the cost of the jet (a process known as depreciation). Given that money today has more value than money in the future, this is a penalty that creates a tax bias against investment (the tax code also requires depreciation for purchases of machines, structures, and other forms of investment).

In other words, businesses should be allowed to immediately "expense" investment expenditures. What the GAO refers to as "accelerated depreciation" is simply the partial mitigation of a penalty, not a loophole.

The same is true about "deferral." Here's what I wrote about that issue in February 2010.

Under current law, the “foreign-source” income of multinationals is subject to tax by the IRS even though it already is subject to all applicable tax where it is earned (just as the IRS taxes foreign companies on income they earn in America). But at least companies have the ability to sometimes delay when this double taxation occurs, thanks to a policy known as deferral.

I added to those remarks later in the year.

From a tax policy perspective, the right approach is “territorial” taxation, which is the common-sense notion of only taxing activity inside national borders. It’s no coincidence that all pro-growth tax reform plans, such as the flat tax and national sales tax, use this approach. Unfortunately, America is one of the world’s few nations to utilize the opposite approach of “worldwide” taxation, which means that U.S. companies face the competitive disadvantage of having two nations tax the same income. Fortunately, the damaging impact of worldwide taxation is mitigated by a policy known as deferral, which allows multinationals to postpone the second layer of tax.

Simply stated, the U.S. government should not be trying to tax income earned in other countries. "Deferral" is the mitigation of a penalty, not a loophole.

So why would the GAO make these mistakes? Well, to be fair to the bureaucrats, they simply relied on the analysis of the Treasury Department.

But why does Treasury (and the Joint Committee on Taxation) make these mistakes? The answer is that they use the "Haig-Simons" tax base as a benchmark, and that approach assumes bad policies such as the double taxation of income that is saved and invested. If you want to get deep in the weeds of tax policy, I shared late last year some good analysis on Haig-Simons produced by my colleague Chris Edwards.

By the way, properly defining loopholes also is an issue for reform on the individual portions of the tax code. I've previously pointed out the flawed analysis of the Tax Policy Center, which put together a list of the 12 largest "tax expenditure" and included six items that don't belong. 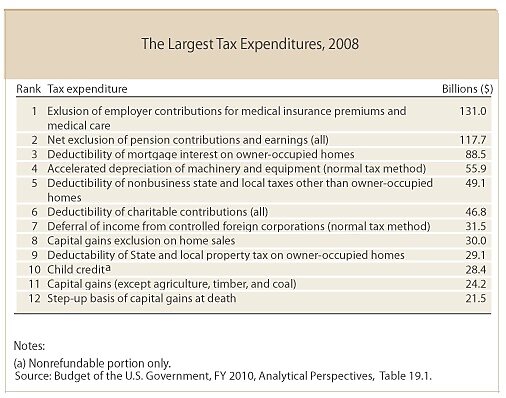 To conclude, the right tax base is what's called "consumed income." But that's simply another way of saying that the system should only tax income one time, and it's how income is defined for both the flat tax and national sales tax.

One final comment about GAO. It's understandable that they used the Treasury Department's methodology, but they also should have produced a list of tax expenditures based on a consumed-income tax base. That's basic competence and fairness.