I often argue that we need to preserve tax competition and tax havens in order to limit the greed of the political class.

Without some sort of external constraint, they will over-tax and over-spend, creating the kind of downward economic spiral already happening in some European nations.

Speaking of which, new evidence from Europe bolsters my case.

Back in 2009, facing pressure from the big G-20 nations, all of the world's major low-tax jurisdictions - even Switzerland - acquiesced to the notion that human rights laws protecting financial privacy no longer would apply to foreign investors.

In other words, high-tax governments now have much greater ability to track - and tax - flight capital.

So how have they responded since that time? Well, look at this chart from the European Union's new report on taxation trends. Tax rates have begun to increase, reversing a very positive trend (which began with the Reagan and Thatcher tax cuts, though this chart only shows data since 1995). 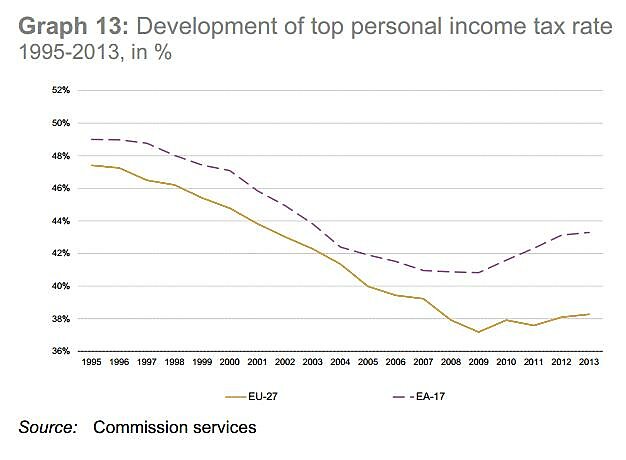 And we also know that the proponents of higher tax rates, such as the statist bureaucrats at the Paris-based OECD, are also the biggest opponents of tax competition. The OECD even complained in one of its reports that tax competition "may hamper the application of progressive tax rates."

Well, those international bureaucrats (who, by the way, get tax-free salaries) are getting their wish. Tax rates are increasing.

So the political class can breathe a sigh of relief.
But what about the people of Europe? Well, economic growth is almost non-existent and unemployment is at record levels.

However, you can't make an omelet without breaking a few eggs. As a past representative of Europe's political elite once remarked, "let them eat cake."

Marie Antoinette eventually may have regretted her choice of words, but Europe's current politicians are probably more clever and have contingency plans. When the you-know-what hits the fan and Europe descends into social disarray and economic chaos, ordinary people will be the ones at risk.

Unfortunately, the United States is on the same path, as shown by these sobering charts from the Bank for International Settlements (and also as illustrated by these very funny Michael Ramirez and Bob Gorrell cartoons).

For more information on the important liberalizing impact of tax competition, here's the video I narrated for the Center for Freedom and Prosperity.

But remember that restraining fiscal burdens is not the only reason to preserve tax competition and tax havens. There also are very important moral reasons to support low-tax jurisdictions.