The George W. Bush administration ushered in a new era of big government. The Obama administration has built on Bush’s profligacy, and the president’s new fiscal 2012 budget proposal would further cement the trend.


Spending as a percentage of GDP has increased dramatically since the surplus years of the late 1990s. As the chart shows, the president’s budget once again seeks a permanently high level of federal spending as a share of the economy: 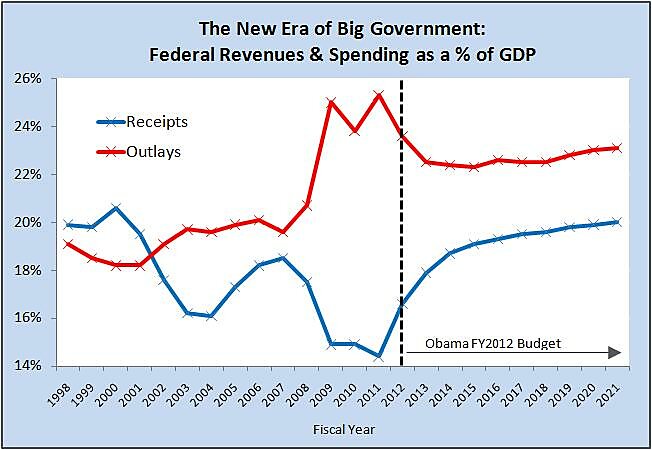 While the numbers drop from their stimulus‐ and recession‐​induced highs, it is not because the president has suddenly decided that he desires a less active government. Rather, optimistic economic assumptions largely account for the slight retrenchment.


Tax increases and optimistic economic assumptions explain the projected rise in revenue as a share of the economy. While the president would like us to believe he’s found religion on spending cuts, he’s actually relying on a rosy economic forecast and sucking more money out of the private sector to reduce annual deficits.


Taking more money from the productive private economy to maintain destructively high levels of federal spending is not a recipe for economic growth. Therefore, this budget proposal is as dangerous as it is disingenuous. Fortunately, it’s also dead on arrival in the Republican‐​controlled House.