Back in 2010, I crunched the numbers from the Congressional Budget Office and reported that the budget could be balanced in just 10 years if politicians exercised a modicum of fiscal discipline and limited annual spending increases to about two percent yearly.

When CBO issued new numbers early last year, I repeated the exercise and again found that the same modest level of budgetary restraint would eliminate red ink in about 10 years.

And when CBO issued their update last summer, I did the same thing and once again confirmed that deficits would disappear in a decade if politicians didn't let the overall budget rise by faster than two percent each year.

Well, the new CBO 10-year forecast was released this morning. I'm going to give you three guesses about what I discovered when I looked at the numbers, and the first two don't count.

Yes, you guessed it. As the chart illustrates (click to enlarge), balancing the budget doesn't require any tax increases. Nor does it require big spending cuts (though that would be a very good idea). 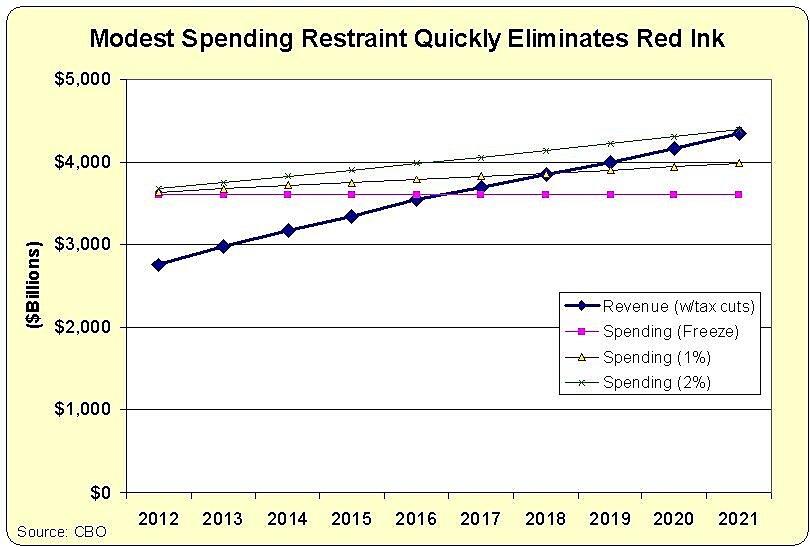 Even if we assume that the 2001 and 2003 tax cuts are made permanent, all that is needed is for politicians to put government on a modest diet so that overall spending grows by about two percent each year. In other words, make sure the budget doesn't grow faster than inflation.

Tens of millions of households and businesses manage to meet this simple test every year. Surely it's not asking too much to get the same minimum level of fiscal restraint from the crowd in Washington, right?

At this point, you may be asking yourself whether it's really this simple. After all, you've probably heard politicians and journalists say that deficits are so big that we have no choice but to accept big tax increases and "draconian" spending cuts.

But that's because politicians use dishonest Washington budget math. They begin each fiscal year by assuming that spending automatically will increase based on factors such as inflation, demographics, and previously legislated program changes.

This creates a "baseline," and if they enact a budget that increases spending by less than the baseline, that increase magically becomes a cut. This is what allowed some politicians to say that last year's Ryan budget cut spending by trillions of dollars even though spending actually would have increased by an average of 2.8 percent each year.

Needless to say, proponents of big government deliberately use dishonest budget math because it tilts the playing field in favor of bigger government and higher taxes.

There are two important caveats about these calculations.

1. We should be dramatically downsizing the federal government, not just restraining its growth. Even if he's not your preferred presidential candidate, Ron Paul's proposal for an immediate $1 trillion reduction in the burden of federal spending is a very good idea. Merely limiting the growth of spending is a tiny and timid step in the right direction.

2. We should be focusing on the underlying problem of excessive government, not the symptom of too much red ink. By pointing out the amount of spending restraint that would balance the budget, some people will incorrectly conclude that getting rid of deficits is the goal.

Last but not least, here is the video I narrated in 2010 showing how red ink would quickly disappear if politicians curtailed their profligacy and restrained spending growth.

Other than updating the numbers, the video is just as accurate today as it was back in 2010. And the concluding message—that there is no good argument for tax increases—also is equally relevant today.

P.S. Some people will argue that it's impossible to restrain spending because of entitlement programs, but this set of videos shows how to reform Social Security, Medicare, and Medicaid.

P.P.S. Some people will say that the CBO baseline is unrealistic because it assumes the sequester will take place. They may be right if they're predicting politicians are too irresponsible and profligate to accept about $100 billion of annual reductions from a $4,000 billion-plus budget, but that underscores the core message that there needs to be a cap on total spending so that the crowd in Washington isn't allowed to turn America into Greece.