Transit ridership has been declining now for four years, and the latest census data, released last week, reveal that the biggest declines are among the groups that you might least expect: young people and low‐​income people. These results come from the American Community Survey, a survey of more than 3 million households a year conducted by the Census Bureau. Here are some of the key findings revealed by the data.


Those who subscribe to the popular belief that Millennials and other young people prefer to transit over owning and driving a car were shocked last week when the Washington Post published an article indicating that “a Millennial exodus” was “behind [Washington] Metro’s diving ridership.” This was based on a study that found that, from 2016 to 2018, young people had reduced their use of transit for commuting by 20 percent, while older people had reduced it by smaller amounts or not at all. The study used cell phone records from one of the nation’s largest wireless carriers, probably Verizon or AT&T. 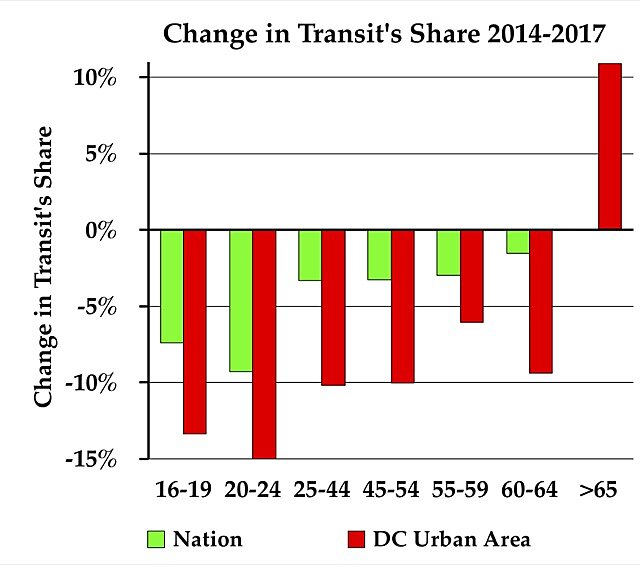 
Although the census data only go as far as 2017, they seem to confirm this finding. As shown in the above chart, the largest declines in transit commuting, both nationally and in the Washington DC urban area, are among younger people. Commuting forms only a part of transit ridership, but to the extent that declining ridership is due to ride‐​hailing services such as Uber and Lyft, those services disproportionately used by people the age of 35. For more information about transit declines by age class, including links to data files for 2017 going back to 2005, see my longer post on the subject. In addition to national data, the files show how people in various age classes commuted to work in each state and each major county, city, and urban area. 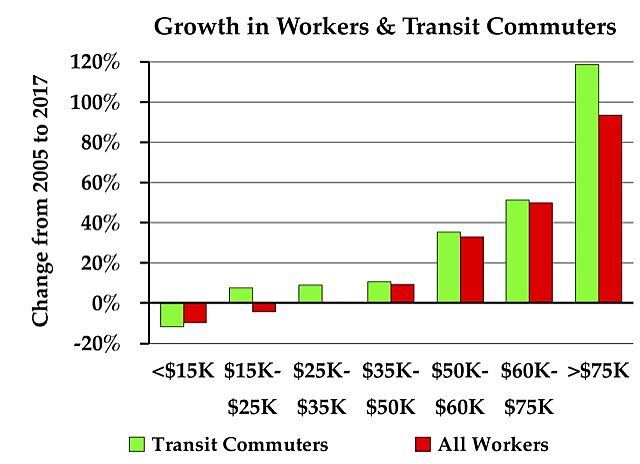 
Transit commuting is increasingly skewed to people who earn more than $75,000 a year. Even though only 19 percent of American workers were in this income class in 2017, they made up 26 percent of transit commuters, an increase from just 14 percent in 2005. Both the average and the median income of transit commuters are higher than those of all workers. For more information on transit commuting and income, including links to data files from 2006 through 2017, see my more detailed post on the subject.


While ride hailing is probably responsible for much of the decline in transit ridership among young people, increasing auto ownership is responsible for much of the decline among low‐​income people. Between 2014 and 2017, the share of households that lacked access to a motor vehicle declined from 9.1 to 8.6 percent. Moreover, the share of workers who live in households with no vehicles declined from 4.6 to 4.2 percent. 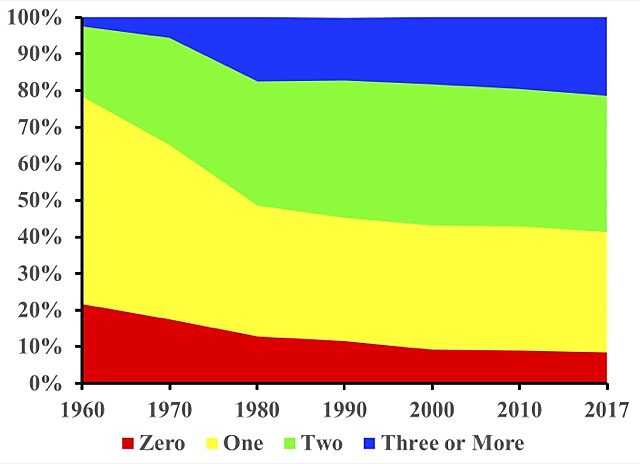 In 1960, more than 20 percent of American households had no motor vehicles while only a small percentage owned three or more, figures that have practically reversed themselves today.


While a few tenths of a percent may not sound like much, remember that in all but a handful of urban areas more than 90 percent of commuters get to work by car while less than 2 percent take transit. Thus, a small increase in auto ownership can lead to a large percentage decrease in transit usage.


Curiously, most American workers who live in households without cars don’t take transit to work. In fact, in most states and urban areas, more workers who live in households without cars nevertheless drive alone to work than take transit to work. How do they drive alone if they don’t have a car? Probably in employer‐​supplied vehicles. In any case, this is just one more indicator of transit’s declining relevance. For more information on increasing auto ownership, including data files, see my detailed post on the subject.


Transit agencies and their supporters act as though transit is somehow vital to the national and local economies. That may still be true in New York City, but it is only marginally true in Boston, Chicago, Philadelphia, San Francisco, and Washington, and not at all true elsewhere. The decline in transit ridership among young people who were supposed to love transit the most, and among low‐​income people who were supposed to need transit the most just reinforces this declining relevance and argues against any further subsidies to this obsolete industry.