Based on new 10-year fiscal estimates from the Congressional Budget Office, I wrote yesterday that balancing the budget actually is very simple with a modest bit of spending restraint.

If lawmakers simply limit annual spending increases to 1 percent annually, the budget is balanced by 2022. 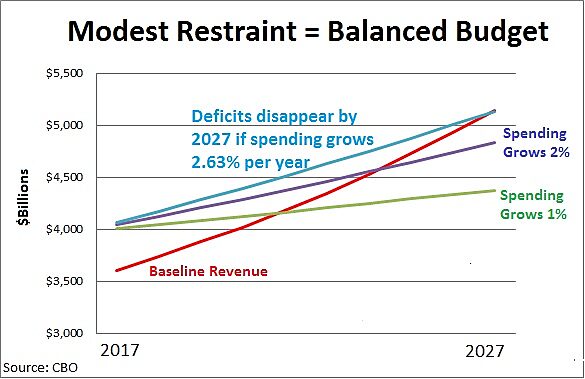 I also pointed out that this wouldn't require unprecedented fiscal discipline. After all, we had a de facto spending freeze (zero percent spending growth) from 2009-2014.

And in another previous column, I shared many other examples of nations that achieved excellent fiscal results with multi-year periods of spending restraint (as defined by outlays growing by an average of less than 2 percent).

Some people seem to think it's impossible to balance the budget if lawmakers are also reducing the amount of tax revenue that goes to Washington each year.

And they think big tax cuts, such as the Trump plan (which would reduce revenues over 10 years by $2.6 trillion-$3.9 trillion according to the Tax Foundation), are absurd and preposterous.

After all, if politicians tried to simultaneously enact a big tax cut and balance the budget, it would require deep and harsh spending cuts that would decimate the federal budget, right? 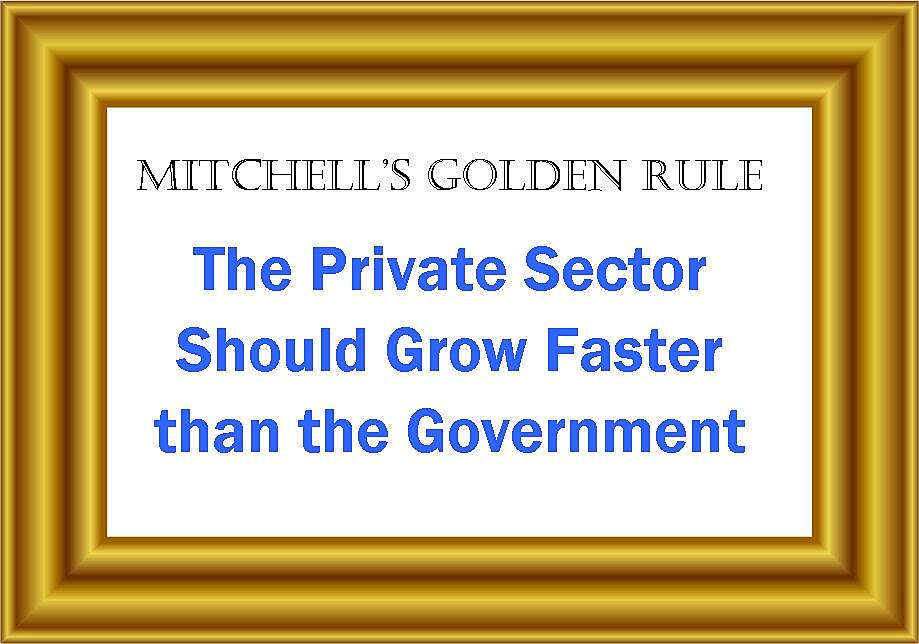 Nope. Not at all.

They just need to comply with my Golden Rule.

Let's examine the fiscal implications of a $3 trillion tax cut. If you look at CBO's baseline revenue forecast for the next 10 years, the federal government is projected to collect more than $43 trillion during that decade. If you reduce that baseline by an average of $300 billion each year, receipts will still grow. Indeed, they'll rise from $3.4 trillion this year to $4.8 trillion in 2027.

And since CBO is forecasting that the federal government this year will spend more than $3.9 trillion, we simply have to figure out the amount of spending restraint necessary so that outlays in 2027 don't exceed $4.8 trillion.

That's not a difficult calculation. It turns out that the American people can get a substantial $3 trillion tax and a balanced budget if politicians simply exercise a modest amount of fiscal discipline and limit annual spending increases to 1.96 percent annually. 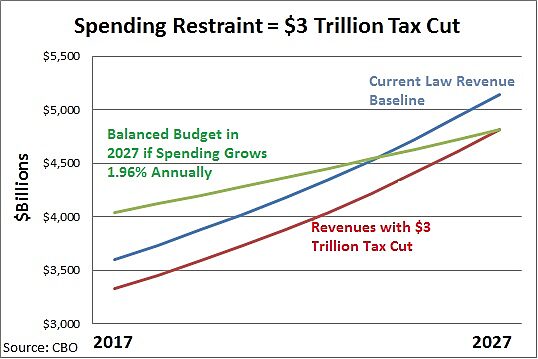 In other words, if the crowd in Washington does nothing more than simply have government grow just a tiny bit less than the projected rate of inflation, lots of good things can be achieved.

P.S. I can't resist pointing out yet again that we shouldn't fixate on balancing the budget. The real goal should be to shrink the burden of federal spending so more resources are allocated by the productive sector of the economy. That being said, if lawmakers address the underlying disease of excessive spending, that automatically solves the symptom of red ink.