A just-released report from the bean counters at the Congressional Budget Office is getting lots of attention because the bureaucrats are now admitting that Obamacare will impose much more damage to the economy than they previously predicted. 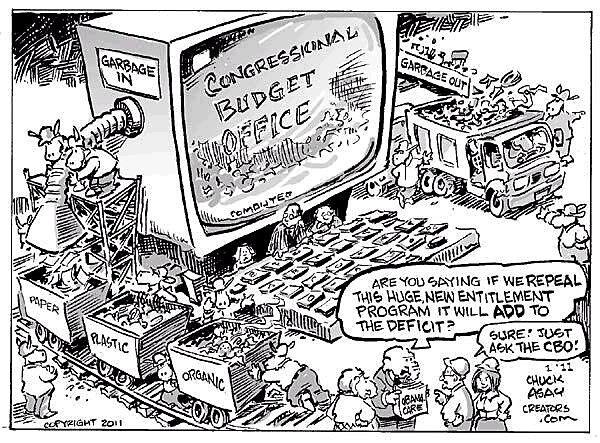 Of course, many people knew from the start that Obamacare would be a disaster and that it would make the healthcare system even more dysfunctional, so CBO is way behind the curve.

Moreover, CBO's deeply flawed estimates back in 2009 and 2010 helped grease the skids for passage of the President's failed law, so I hardly think they deserve any applause for now producing more realistic numbers.

But today's post isn't about the Obamacare fiasco. I want to focus instead on some other numbers in the new CBO report.

The bureaucrats have put together their new 10-year "baseline" forecast of how much money the government will collect based on current tax laws and the latest economic predictions. These numbers show that tax revenue is projected to increase by an average of 5.4 percent per year.

As many readers already know, I don't fixate on balancing the budget. I care much more about reducing the burden of government spending and restoring the kind of limited government our Founding Fathers envisioned.

But whenever the CBO publishes new numbers, I can't resist showing how simple it is to get rid of red ink by following my Golden Rule of fiscal restraint.

Here's a chart showing projected revenue over the next 10 years, along with lines showing what happens if spending (currently $3.54 trillion) follows various growth paths. 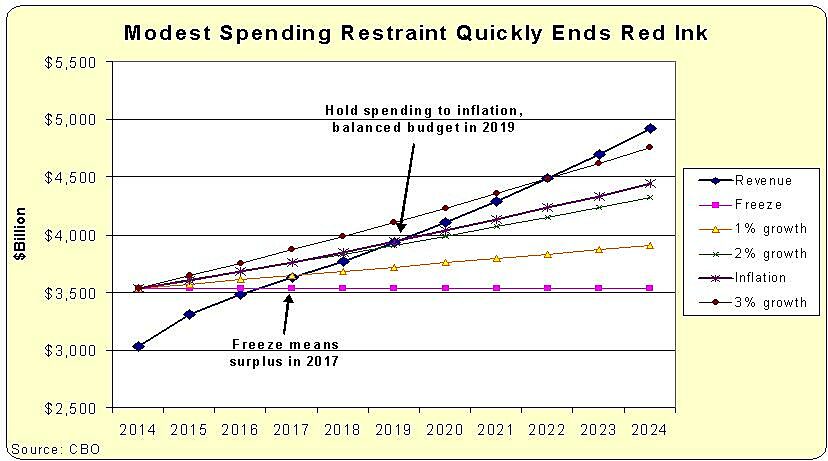 The two biggest takeaways are that a spending freeze (similar to what we got in 2012 and 2013) would almost balance the budget in 2016 and would definitely produce a budget surplus in 2017. I also highlight what would happen if politicians merely limited spending so it grew at the rate of inflation, about 2.3 percent per year. Under that scenario, the budget would be balanced in 2019 (actually a $20 billion surplus, but that's an asterisk by Washington standards). 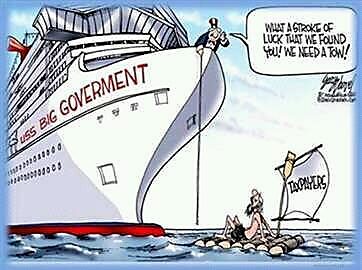 In other words, there is no need to raise taxes. It's very simple to balance the budget without extracting more money from taxpayers.

This means the Simpson-Bowles people are wrong. The Domenici-Rivlin folks are wrong. Senator Patty Murray is wrong. Jeb Bush and Lindsey Graham are wrong. And (here's a surprise) the Obama Administration is wrong.

And we have some additional evidence. It's a chart taken directly from the CBO report and it shows that revenues over the next 10 years will be above the long-run average. This is because even weak growth slowly but surely produces more revenue for Washington, in part because it gradually pushes people into higher tax brackets. 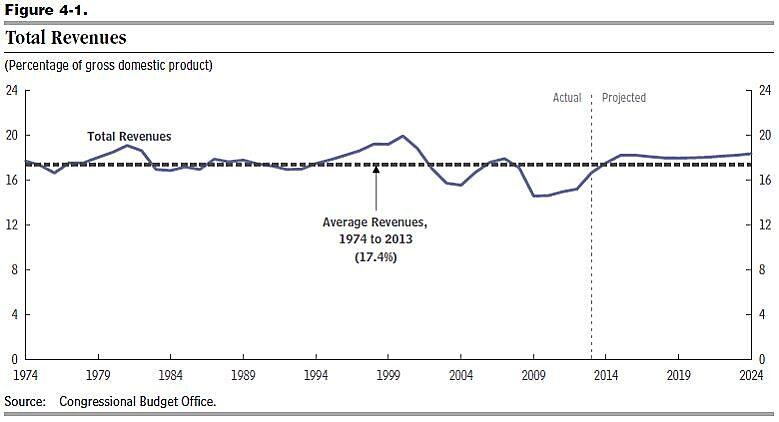 And this chart just looks at the next 10 years. If you peruse the long-run fiscal projections, you'll see that the tax burden is projected to increase dramatically over the next several decades.

The moral of the story is that there should be tax cuts (ideally as part of tax reform), not tax increases.

P.S. Just in case you think I was being unfair in my description of the Congressional Budget Office, keep in mind that these are the bureaucrats who advise Congress that economic performance increases when taxes go up.

P.P.S. And even though CBO is finally admitting some of the flaws in Obamacare, the bureaucrats are still unrepentant Keynesians. Check out this excerpt from a story in yesterday's Washington Post:

...Rep. Chris Van Hollen (Md.), the top Democrat on the committee, cited the CBO’s finding that the law will “boost overall demand for goods and services over the next few years.” This is because people benefiting from its expansion of Medicaid and insurance subsidies will likely have extra money to spend, which “will in turn boost demand for labor over the next few years,” the report says.

So the CBO would like us to believe that the more money the government redistributes, the more growth we'll get. I guess this explains why France is such an economic dynamo.

More seriously, this is the same flawed analysis that allowed CBO to claim the so-called stimulus was creating jobs as employment was falling. You can understand why I've written that Keynesian economics is the left's perpetual motion machine.

P.P.P.S. Here's a Center for Freedom and Prosperity video that I narrated back in 2010, which explains why it is simple to balance the budget. The numbers in the video obviously need to be replaced with the ones I shared above, but the analysis is still right on the mark.

P.P.P.P.S. Since we started this post by talking about how Obamacare is undermining the economy, let's close with a great example of Obamacare humor. Remember Pajama Boy? Well, he's back for an encore performance thanks to some very clever people at Americans for Prosperity. 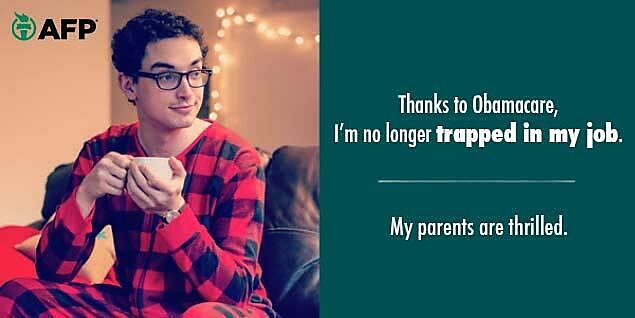 This is amusing, but it surely isn't as funny as President Obama's Chief Economist, who actually argued with a straight face that it was a good sign that Obamacare was leading people to drop out of the labor force because unemployment  "might be a better choice and a better option than what they had before."

Sort of reminds me of this Chuck Asay cartoon, or this famous set of wagon cartoons.

Dependency for more and more people. Such an inviting concept...until this happens.