Many of the politicians in Washington, including President Obama during his State of the Union address, piously tell us that there is no way to balance the budget without tax increases. Trying to get rid of red ink without higher taxes, they tell us, would require “savage” and “draconian” budget cuts.


I would like to slash the budget and free up resources for private‐​sector growth, so that sounds good to me. But what’s the truth?


The Congressional Budget Office has just released its 10‐​year projections for the budget, so I crunched the numbers to determine what it would take to balance the budget without tax hikes. Much to nobody’s surprise, the politicians are not telling the truth.


The chart below shows that revenues are expected to grow (because of factors such as inflation, more population, and economic expansion) by more than 7 percent each year. Balancing the budget is simple so long as politicians increase spending at a slower rate. If they freeze the budget, we almost balance the budget by 2017. If federal spending is capped so it grows 1 percent each year, the budget is balanced in 2019. And if the crowd in Washington can limit spending growth to about 2 percent each year, red ink almost disappears in just 10 years. 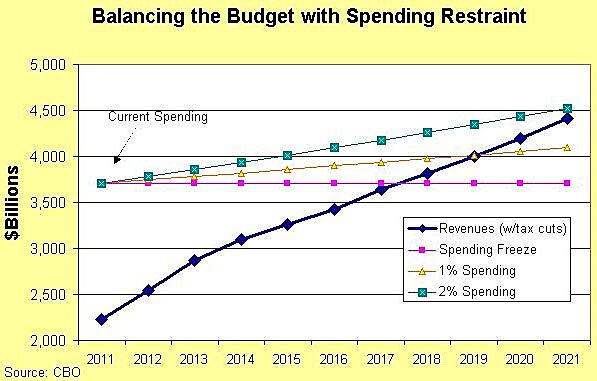 These numbers, incidentally, assume that the 2001 and 2003 tax cuts are made permanent (they are now scheduled to expire in two years). They also assume that the AMT is adjusted for inflation, so the chart shows that we can balance the budget without any increase in the tax burden.


I did these calculations last year, and found the same results. And I also examined how we balanced the budget in the 1990s and found that spending restraint was the key. The combination of a GOP Congress and Bill Clinton in the White House led to a four‐​year period of government spending growing by an average of just 2.9 percent each year.


We also have international evidence showing that spending restraint — not higher taxes — is the key to balancing the budget. New Zealand got rid of a big budget deficit in the 1990s with a five‐​year spending freeze. Canada also got rid of red ink that decade with a five‐​year period where spending grew by an average of only 1 percent per year. And Ireland slashed its deficit in the late 1980s by 10 percentage points of GDP with a four‐​year spending freeze.


No wonder international bureaucracies such as the International Monetary fund and European Central Bank are producing research showing that spending discipline is the right approach.


This video provides all the details.