The Congressional Budget Office has just released the update to its Economic and Budget Outlook.

There are several things from this new report that probably deserve commentary, including a new estimate that unemployment will "remain above 8 percent until 2014."

This certainly doesn't reflect well on the Obama White House, which claimed that flushing $800 billion down the Washington rathole would prevent the joblessness rate from ever climbing above 8 percent.

Not that I have any faith in CBO estimates. After all, those bureaucrats still embrace Keynesian economics.

But this post is not about the backwards economics at CBO. Instead, I want to look at the new budget forecast and see what degree of fiscal discipline is necessary to get rid of red ink.

The first thing I did was to look at CBO's revenue forecast, which can be found in table 1-2. But CBO assumes the 2001 and 2003 tax cuts will expire at the end of 2012, as well as other automatic tax hikes for 2013. So I went to table 1-8 and got the projections for those tax provisions and backed them out of the baseline forecast.

That gave me a no-tax-hike forecast for the next 10 years, which shows that revenues will grow, on average, slightly faster than 6.6 percent annually. Or, for those who like actual numbers, revenues will climb from a bit over $2.3 trillion this year to almost $4.4 trillion in 2021.

Something else we know from CBO's budget forecast is that spending this year (fiscal year 2011) is projected to be a bit below $3.6 trillion.

So if we know that tax revenues will be $4.4 trillion in 2021 (and that's without any tax hike), and we know that spending is about $3.6 trillion today, then even those of us who hate math can probably figure out that we can balance the budget by 2021 so long as government spending does not increase by more than $800 billion during the next 10 years.

Yes, you read that correctly. We can increase spending and still balance the budget. This chart shows how quickly the budget can be balanced with varying degrees of fiscal discipline. 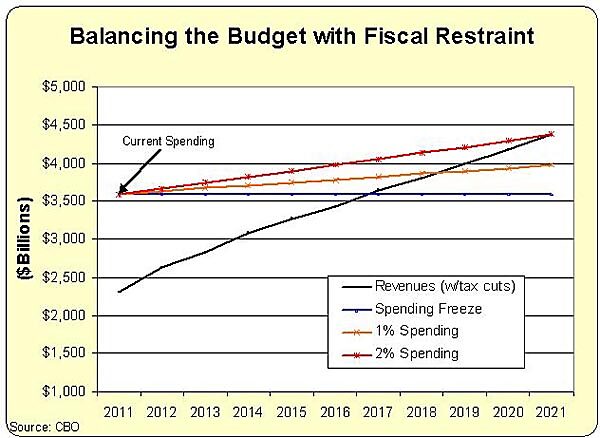 Not that these numbers are a surprise. I got similar results after last year's update, and also earlier this year when the Economic and Budget Outlook was published.

Some of you may be thinking this can't possibly be right. After all, you hear politicians constantly assert that we need tax hikes because that's the only way to balance the budget without "draconian" and "savage" budget cuts.

But as I've explained before, this demagoguery is based on the dishonest Washington practice of assuming that spending should increase every year, and then claiming that a budget cut takes place anytime spending does not rise as fast as previously planned.

In reality, balancing the budget is very simple. Modest spending restraint is all that's needed. That doesn't mean it's easy, particularly in a corrupt town dominated by interest groups, lobbyists, bureaucrats, and politicians.

But if we takes tax hikes off the table and somehow cap the growth of spending, it can be done. This video explains.

And we know other countries have succeeded with fiscal restraint. As is explained in this video.

Or we can acquiesce to the Washington establishment and raise taxes and impose fake spending cuts. But that hasn't worked so well for Greece and other European welfare states, so I wouldn't suggest that approach.