Just days after the introduction of a very good plan by the Chairman of the House Budget Committee, leaders from the Republican Study Committee in the House of Representatives have introduced an even better plan.

In a previous post, I compared spending levels from the Obama budget and the Ryan budget and showed that the burden of federal spending would rise much faster if the White House plan was adopted.

If the goal is to restrain government, the RSC blueprint is the best of all worlds. As the chart illustrates, government only grows by an average of 1.7 percent annually with that plan, compared to an average of 2.8 percent growth under Ryan's good budget and 4.7 percent average growth with Obama's head-in-the-sand proposal. 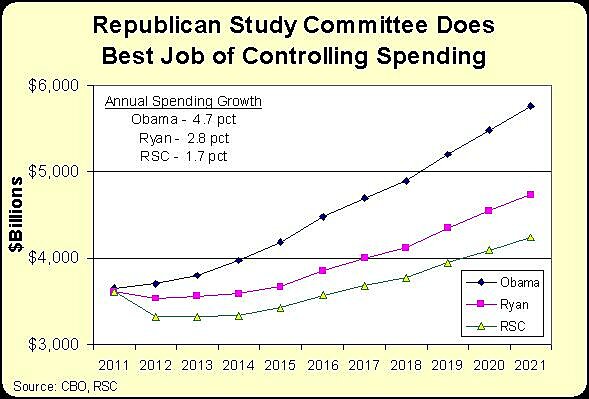 According to the numbers released by the Republican Study Committee, the burden of federal spending would fall to about 18 percent of GDP after 10 years if the RSC plan is implemented.

While that's a great improvement compared to today, the federal government would still consume as much of the economy as it did when Bill Clinton left office.

Last but not least, for those who are focused on fiscal balance rather than the size of government, this is the only plan that produces a balanced budget. Indeed, red ink disappears in just eight years.