[E]ven though the high-level theoretical content of the realpolitiker 70s version of neoconservatism and the Wilsonian 2000s version of neoconservatism seem very different, the operational content is extremely similar. You have support for higher defense budgets, a tendency toward threat-inflation and hysteria, a belief in an aggressive military posture and extensive saber-rattling, hostility to negotiations, and hostility to international law both in theory and in practice. This was initially presented to the world as a “realistic” alternative to lefty critiques of US support for anti-communist dictators and more recently appeared as an “idealistic” critique of lefty reluctance to launch wars, but the continuity between the views is enormous.

What Matt doesn't say is why the policy outcomes stayed largely the same despite shifting theoretical sands.  I think this piece by Brian Schmidt and Michael Williams can help shed some light on the problem. 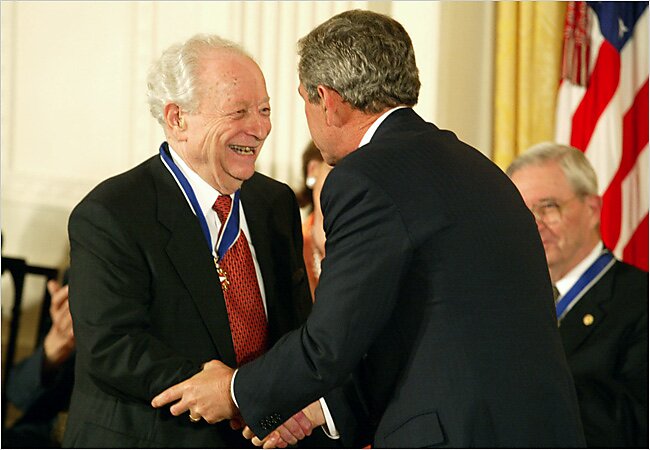 A social order based purely on narrowly egoistic interests, neoconservatives argue, is unlikely to survive — and the closer one comes to it, the less liveable and sustainable society will become. Unable to generate a compelling vision of the collective public interest, such a society would be incapable of maintaining itself internally or defending itself externally. As a consequence, neoconservatism regards the ideas at the core of many forms of modern political and economic rationalism — that such a vision of interest can be the foundation for social order — as both wrong and dangerous. It is wrong because all functioning polities require some sense of shared values and common vision of the public interest in order to maintain themselves. It is dangerous because a purely egoistic conception of interest may actually contribute to the erosion of this sense of the public interest, and the individual habits of social virtue and commitment to common values that sustain it.

In this context consider the worshipful treatment of men like Teddy Roosevelt and Rudy Giuliani by neoconservatives, and neoconservatives' utter contempt for libertarians and individualism.  For neocons, the higher defense budgets and militarism, the aggressive military posture and extensive saber-rattling, the nationalism, were in some sense ends in themselves rather than rationally calculated means to defend the country.  Without an enemy and a grand national project — note in the article to which Matt points Kristol's admonition that "statesmen should, above all, have the ability to distinguish friends from enemies" — the society would descend into a variety of individual pursuits — family, profit, local community, learning — that provide no unifying politics.  Again, for Kristol, "a nation whose politics turn on the cost of false teeth is a nation whose politics are squalid."  A grand national project, be it a global proxy war against the Soviet Union, a crusade to end terrorism, or even a recurring fetish for space travel, provides unifying substance for the country.

The trouble, as Matt rightly observes, is that you can't explicitly just go around glomming onto whatever rationale provides the best argument for militarism and nationalism today. The citizens of the country seem unlikely to support costly and destructive policies based on the idea that it's all for their own good.  I am reminded of Ed Crane and Bill Niskanen's apt reference to neoconservatism as "a movement with a head but no body," meaning that it lacked indigenous support at the grassroots level.  So the obvious play for neocons was to sew the neoconservative head onto the conservative nationalist body.  To justify endless war, the idea of "real America" being under siege by both an insular and tweedy academy (in Schmidt and Williams' story, the scientific-rationalist realists) and an array of foreign devils allowed a group of radical ideas to strike a conservative pose:

In foreign policy as in domestic policy, neoconservatism claims to represent the majority of real Americans, to speak on their behalf, and to defend the validity of their beliefs in their virtues and values (and their place as the basis for the national interest of the United States), just as vociferously as it has represented those values against the depredations of elites in the culture wars. Although a high proportion of neoconservatives are intellectuals — and are often part of what would be considered an academic elite by any standards — they are able to represent themselves as outsiders shunned and victimized by liberal (and realist) intellectuals in precisely the same way that real people are, and for the same reasons — for expressing what the people really know in an elite cultural environment dominated by self-interested, self-righteous, and yet culturally decadent liberal elites.

In this reading, trying to ground the policy outcomes in a coherent theory of international politics is bound to be fruitless.  The policy outcomes themselves are designed to provide a centripetal counter to the polity's natural tendency to fly apart.  On this point Schmidt and Williams cite Midge Decter ("domestic policy was foreign policy, and vice-versa") and Robert Kagan ("there can be no clear dividing line between the domestic and the foreign").  I think there's something to this.