Global Science Report is a feature from the Center for the Study of Science, where we highlight one or two important new items in the scientific literature or the popular media. For broader and more technical perspectives, consult our “Current Wisdom.”

A story this week that has been making the rounds in the climate-media complex finds that natural variability is responsible for perhaps as much as 50% of the summertime decrease in Arctic sea ice that has taken place over the past 30 years or so (anthropogenic climate change is the presumed factor in the remainder).

This isn’t new. The last (2013) science report from the UN’s Intergovernmental panel on climate change said:

Using climate model simulations from the NCAR CCSM4…inferred that approximately half (56%) of the observed rate of decline from 19979 to 2005 was externally (anthropogenically) forced, with the other half associated with natural internal variability.

Ten years ago, a study was conducted by a team led by Julienne Stroeve that looked at the observed rate of Arctic sea ice loss and compared it to climate model expectations. [A side note here: the loss of Arctic sea ice (which is floating ice) does not lead to sea level rise just as the melting of ice in your cocktail doesn’t lead to your glass overflowing]. What Stroeve and colleagues found was the Arctic sea ice was being lost at a far brisker pace than climate models had predicted (Figure 1). 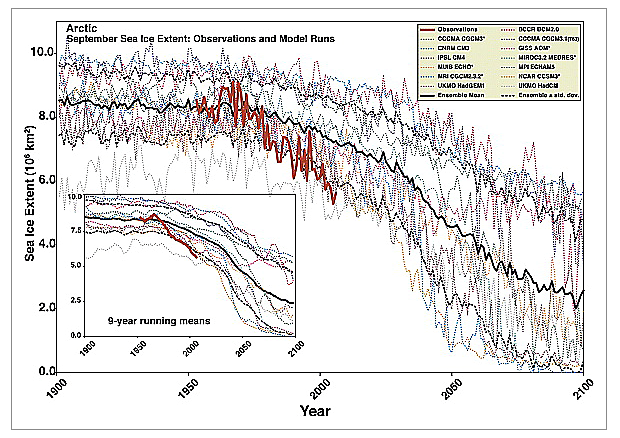 Is this an instance where human-caused climate change is progressing at a pace that is “worse than expected”?

In the 10 years since the Stroeve study, most research has blamed natural variability for the faster-than-modeled pace of Arctic ice loss. The new study, led by University of California Santa Barbara’s Qinghua Ding, announced the same this week. Co-author Axel Schweiger explained to the Christian Science Monitor that there were two possible reasons for the existing model/observation discrepancy:

“1) [the models] are not sensitive to greenhouse gases because they oversimplify physical processes [i.e., climate change is worse than expected] or 2) natural variability has added to the observed trend and the models are fine, [but] because by design of the experiment...they cannot match the observed trend.”

The new study was rather unique in that the research team attempted to quantify the role of natural variability (acting primarily through circulation changes that helped both to directly usher ice out of the Arctic as well as to introduce warm water (from more southerly latitudes) into it) versus that of anthropogenic climate change. As to what they found the authors write:

“Internal variability dominates the Arctic summer circulation trend and may be responsible for about 30–50% of the overall decline in September sea ice since 1979.”

It is this result that the press reports tended to focus on. But in doing so, they missed an important implication of this finding—one that we first touched on back in 2011. It is this: Arctic ice loss is a positive feedback on temperature as the loss of ice (both acting to reduce the area of a highly reflective surface as well as exposing a larger area of warm water) leads to rising temperatures which leads to more ice loss, and so on. This is the primary reason why the warming in the Arctic is supposed to exceed the global average warming rate.

This means that when comparing the rates of observed warming with the rates of warming expected by climate models, that natural variability acting on Arctic sea ice has been making the models seem to be closer to reality than they actually are. In other words, this form of natural variability is (fortuitously) acting to improve (apparent) model/observed agreement.

And considering that the climate models are already performing poorly as it is, the new finding means that they are actually faring even worse than has been generally realized. And accounting for this strengthens the case for a lukewarming future from greenhouse gas emissions.

Ring up another strike against the climate models, and another reason why basing government policy on their output is a bad idea.