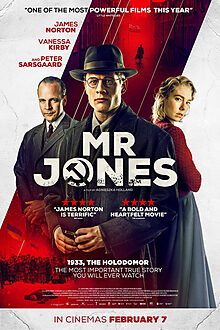 Walter Duranty was the New York Times reporter who won a Pulitzer Prize in 1932 for his dispatches from the Soviet Union — reporting that even the Times now declares “largely discredited” and “completely misleading.” His biographer goes further, calling him Stalin’s Apologist. I knew this story. But a new movie, Mr. Jones, which Kyle Smith approvingly calls “a vicious act of celluloid vivisection on Duranty,” portrays him as thoroughly sinister, from his louche and lavish lifestyle to his denunciation of reporters who tried to report the truth.

One such honest reporter was Gareth Jones, a young Welsh free‐​lancer who went to Moscow in 1933 to study the Soviet economy. He found his way to Ukraine, once known as the “breadbasket of Europe” but by 1933 a land of famine and desperation. He saw starvation, death, and cannibalism. He tried to tell the story but found himself not believed or brushed off.

Mr. Jones was written by Andrea Chalupa and directed by Agnieszka Holland. The imagery in the movie is dark — shadowy and foreboding. It was, of course, a dark time, in Moscow, in Berlin, and in places where people worried about what might be coming. George Orwell, David Lloyd George, and William Randolph Hearst play small but visible roles in the movie. Blink and you’ll miss Malcolm Muggeridge and Eugene Lyons, young Soviet‐​sympathizing journalists who soon realized the truth, told it, and in later years wrote for William F. Buckley Jr.’s National Review.

Anne Applebaum has told the story of the Ukrainian famine, also known as holodomor, in this Encyclopedia Britannica article and in her 2017 book Red Famine. She traces it first to the Communist collectivization of agriculture but also to Stalin’s deliberate requisition of crops and other products to be taken to Russia and to the widespread persecution, deportation, or even execution of those who resisted collectivization.

At the end of the movie Duranty says to Mr. Jones, “You can’t make an omelet without breaking eggs” — a phrase he actually used in a New York Times article. The Times now recognizes the truth about Stalin and Duranty. Its movie review is titled “Bearing Witness to Stalin’s Evil” and calls Duranty a “Stalin apologist.”

Mr. Jones was intended for theatrical release but can be found on Amazon Prime now. For a happier historical time, you can also watch 1776 this Saturday afternoon on TCM.

In 2007 I asked, Where are the anti‐​communist movies? Mr. Jones is an admirable addition to that too‐​short list.