A new study this week finds that school mothers overwhelmingly support school choice. According to the Friedman Foundation's survey, 69 percent of American mothers of school-aged children supported scholarship tax credit (STC) programs while only 19 percent opposed them. Americans in general support STC programs by a margin of 66 percent to 24 percent and non-schoolers support them 64 percent to 26 percent. 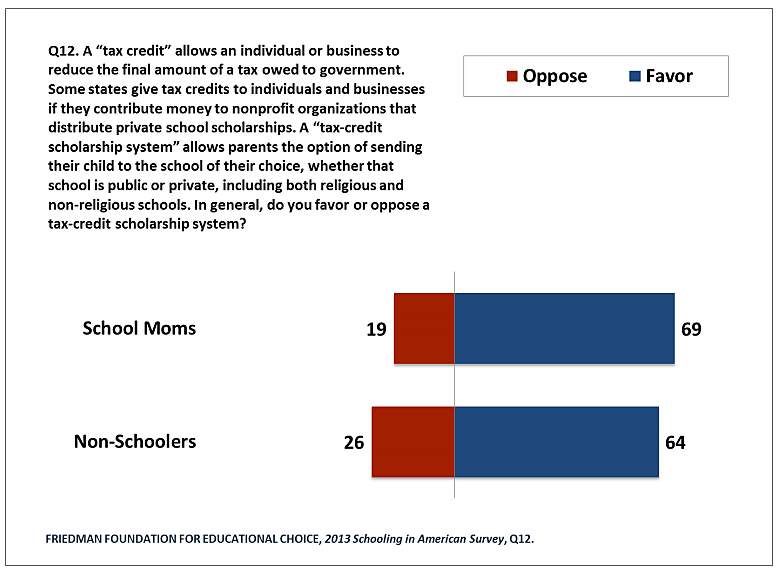 The survey found even higher support for STC programs among political independents, middle-income families, and African Americans (72 percent each). The greatest opposition (35 percent) came from high-income families who are already financially able to live in a district with a high-performing public school or to pay for their children to attend a private school.

The high level of public support for school choice is consistent with the findings of Harvard University's Program on Education Policy and Governance, which conducts an annual survey measuring public support of various education policies. Harvard's 2012 survey found that 72 percent of Americans favor STC programs.

Voucher programs, which entail direct government expenditures of tax dollars to provide school choice, were less popular than STC programs but still supported by a plurality of mothers. When asked about their support for voucher programs without providing a definition for "voucher," 43 percent of mothers supported vouchers and 22 percent were opposed. When provided with a definition for "voucher," support increased to 66 percent and opposition increased to 26 percent. These findings are also consistent with the 2012 Harvard survey, which found 43 percent of the general public supported vouchers with 29 percent opposed and 28 percent neutral. When the "neutral" option was eliminated, the support-to-opposition ratio was 50-50.

Some of the Friedman study's other findings include: