In an earlier post today, I described a reasonable methodology for estimating the hidden costs imposed on companies whose suppliers receive export subsidies from the Export‐​Import Bank. Ex‐​Im officials like to talk about how they “grow the economy” and create jobs by enticing foreign customers with low‐​rate financing to buy U.S. exports. As I described in that earlier post, when the cost to business of exporting is mitigated by subsidies, companies will likely export more. That may be good for them, but it’s not so good for their U.S. customers, whose foreign competition is now enjoying lower costs (courtesy of U.S. taxpayers). Delta Airlines’ complaint about subsidized Boeing sales to Air India having an adverse impact on Delta, who competes for passengers with Air India, is a fairly clear example of the problem.


As an approximation of the cost imposed on Downstream Industry A, (let’s call it the Delta Effect), I used the subsidies received by every industry whose output is used in Downstream Industry A’s production process, adjusted those subsidies by the importance of the input relative to the total of all intermediate goods inputs, and summed up the values. I did this for every 6‐​digit NAICS manufacturing code and presented tables of results in descending order from biggest victim to biggest beneficiary. There were 236 industries — perhaps too much information, particularly for a blog post.


So for greater clarity, this table compiles the data at the broader, 3‐​digit NAIC industry level. 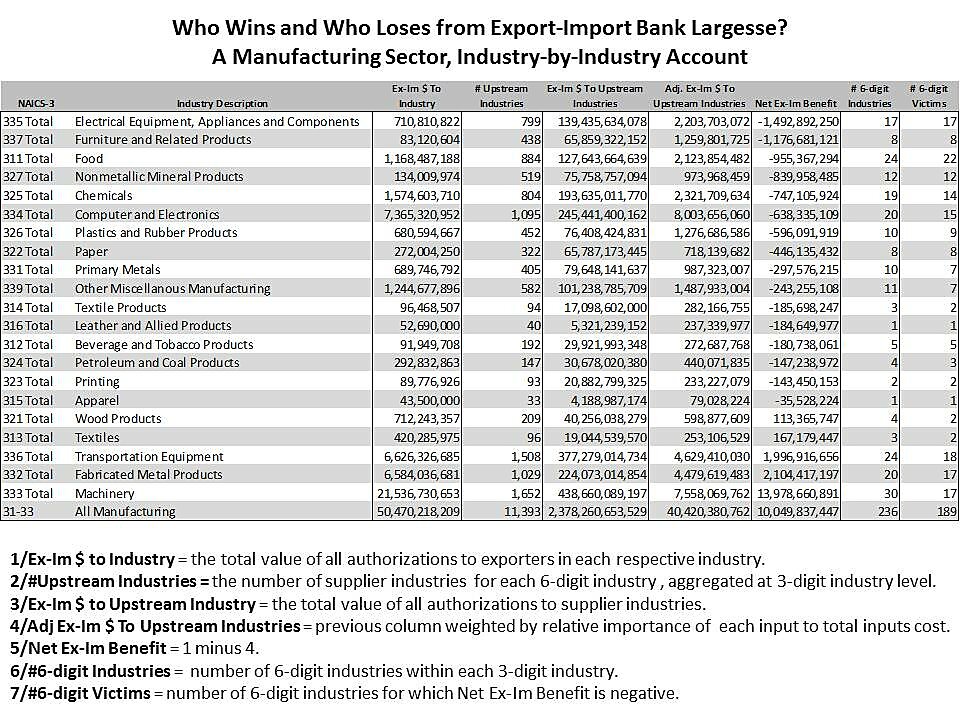 As you can see, most aggregated 3‐​digit industries are victims of Ex‐​Im subsidies. And most of the 6‐​digit industries within each broader 3‐​digit industry are victims, too. U.S. manufacturers of electrical equipment, appliances, furniture, food products, non‐​metallic metals, chemicals, computers, plastics, rubber, paper, primary metals, and many other goods should give Delta a call and get really busy during Congress’s August recess.