The Export‐​Import Bank and Its Victims: Which Industries Bear the Brunt

The Export-Import Bank of the United States is a government-run export credit agency, which provides access to favorable financing for the foreign customers of some U.S. companies.  For several months, Washington has been embroiled in a debate over whether to reauthorize the Bank's charter, which will otherwise expire on September 30.  While Republican House leadership remains publicly committed to shutting down the Bank, a bipartisan group of eight senators introduced reauthorization legislation last night, setting the stage for a post-August recess showdown.

Reauthorization buffs contend that Ex-Im fills a void left by private sector lenders unwilling to provide financing for certain transactions and, by doing so, contributes importantly to U.S. export and job growth.  Rather than burdening taxpayers, the Bank generates profits for the U.S. Treasury, helps small businesses succeed abroad, encourages exports of green goods, contributes to development in sub-Saharan Africa, and helps “level the playing field” for U.S. companies competing in export markets with foreign companies benefitting from their own governments’ generous export financing programs.  Accordingly, failure to reauthorize the Bank’s charter would be akin to unilateral disarmament.

But those justifications – two rationalizations, really, and a few token appeals to liberal sensibilities intended to create the illusion of a bipartisan imperative for reauthorization – are unpersuasive or non-responsive to Ex-Im’s critics.  By effectively superseding the risk-based decision-making processes of legions of private-sector, profit-maximizing financial firms with the choices of a handful of bureaucrats using non-market benchmarks and pursuing often opaque, political objectives, Ex-Im risks taxpayer dollars.  That Ex-Im is currently self-sustaining and generating revenues is entirely beside the point and is no more reassuring than a drunk driver rationalizing that he made it home safely last night so there’s no danger in drunk driving tonight.

The truth is that Ex-Im’s revenue stream is a function of fluid global circumstances and given its inadequately diversified portfolio (heavily concentrated in aircraft loans), the Bank is exposed to a decline in demand for air travel, which could prompt a slew of defaults on aircraft loans.  Recall that Fannie Mae and Freddie Mac also showed book profits for years until the housing market suddenly crashed and taxpayers were left holding the bag.

The second pillar of reauthroization rationalization – that Beijing, Brasilia, and Brussels subsidize their exporters so Washington must, too – sweeps under the rug the fact that there are dozens of criteria that feed into the ultimate purchasing decision, including product quality, price, producer’s reputation, local investment and employment opportunities created by the sale, warranties, after-market servicing, and the extent to which the transaction contributes toward building a long-term relationship between buyer and seller.  To say that U.S. exporters need assistance with financing to “level the playing field” suggests that U.S. exporters do not already have inherent advantages among the multitude of factors that inform the purchasing decision.  Moreover, by “leveling the playing field” – to continue with that euphemism – Ex-Im “unlevels” the playing field for many more U.S. companies competing at home and abroad. This adverse effect has been ignored, downplayed, or mischaracterized, but the collateral damage is substantial and should be a central part of the story.

When U.S. taxpayers provide foreign firms with low-rate financing to purchase U.S. exports, we are subsidizing the foreign competitors of downstream U.S. companies.  While Ex-Im helps some U.S. companies by reducing their costs of doing business, it hurts other U.S. companies by increasing their costs relative to their lucky foreign competitors’ costs. On that point, Delta Airlines has been vocal in its objection to Ex-Im-facilitated sales of Boeing jetliners to foreign carriers, such as Air India.  Delta rightly complains that the U.S. government, as a matter of policy, is subsidizing its foreign competition by reducing Air India’s cost of capital.  Money is fungible and that cost reduction enables Air India to offer lower prices in its bid to compete for passengers, which has a direct impact on Delta’s bottom line.  This is a legitimate concern and it is not limited to this example.

Consider the generic case.  A U.S. supplier sells to both U.S. and foreign customers.  Those customers compete in the same downstream industry in U.S. and foreign markets. The U.S. supplier is thrilled that Ex-Im is providing his foreign customer with cheap credit to make the purchase – so thrilled, in fact, that he might even extrapolate from his experience in a testimonial about how essential the Ex-Im Bank is to the U.S. economy.  Meanwhile, the foreign customer is happy to accept the advantageous financing terms for a variety of reasons, among which is the fact that his capital costs are now lower relative to what they would have been and relative to the costs of his U.S. competitors (aka the U.S. customers of the same U.S. supplier). Moreover, by subsidizing export sales, Ex-Im is diverting domestic supply and making U.S. customers less important to their U.S. suppliers. Especially in industries where there are few producers, numerous customers, and limited substitute products, Ex-Im changes the relationships between U.S. buyers and U.S. sellers by providing the latter with greater market power and leverage.  Ex-Im helps some companies (in the short run), but hurts others – very many others.

Delta was able to make the connection.  Others have connected the dots.  But most of the time, the downstream U.S. companies are unwitting victims of this cost-shifting.  These costly externalities are endemic features of Ex-Im's model.

Based on a review of Ex-Im Bank transaction data for the period 2007 through 2013:

Although subsidies like these have been shown to weaken firms over time by reducing their incentives to be efficient and competitive, assume for now that the subsidy amounts authorized are approximations of the “benefits” of Ex-Im.  In other words, start with the assumptions made by Ex-Im supporters. Over seven years, the U.S. manufacturing sector received $107 billion of benefits from Ex-Im in the form of export subsidies.  While most of the largesse went to aircraft and aircraft parts manufacturers (Boeing), subsidies were provided across the spectrum of industries. About $50 billion in authorizations was spread over exports of products in all 21 broad U.S. manufacturing industries – as defined by the 3-digit North American Industry Classification System – from food, textiles, and wood products to machinery, computers, and transportation equipment.

At the 6-digit level of specificity, manufacturers in 225 of 236 industries benefitted from that $50 billion in non-aircraft manufacturing authorizations.  Plotting the subsidies received by firms in each of the 236 industries on a horizontal axis, the range spans from $0 (for 11 industries receiving no benefits) to $5,213,669,271 (for “turbine and turbine generator set units”). The median value of benefits for the 236 industries was $39,926,778 and the mean (skewed far to the right by billion dollar-plus subsidies to 11 industries) was $213,853,857.

While stimulating export growth has long been a fetish of policymakers, the consequences for downstream industries (industries that rely on other industries’ output as production inputs) in terms of domestic supply and price can be adverse.  If you receive an export subsidy, you benefit by exporting. If your supplier receives an export subsidy, he benefits by exporting, but you likely incur a cost. If that supplier accounts for 90 percent of your inputs, the cost to you is likely more significant than if he accounts for only 10 percent of your inputs.

With those basics in mind, the costs of Ex-Im’s subsidies can be estimated from input-output tables and Ex-Im authorization data.  On its website, the Bureau of Economic Analysis maintains a set of input-output tables, which map the relationships between U.S. industries throughout the economy. Among the information that can be discerned from those tables is the disposition of output from any and all industries and the input use requirements of any and all industries.

One quick takeaway from the BEA 2007 I-O Use Table is that fully two-thirds of the value of output of U.S. manufacturing industries is incorporated as intermediate inputs in the production of other industries. With that picture of industrial interdependence in mind, it is easier to see how artificial incentives aimed at changing the behavior of particular industries can have ripple effects throughout the economy.

Those adjusted, aggregated costs ranged from $8,024,418 for “Primary smelting and refining of copper” (331411) to $2,557,512,806 for “Broadcast and wireless communications equipment” manufacturing (334220) with a median value of $132,164,800.  Plotting these costs on the vertical axis and combining with the benefits on the horizontal axis, the following scatterplot tells the first part of the story. 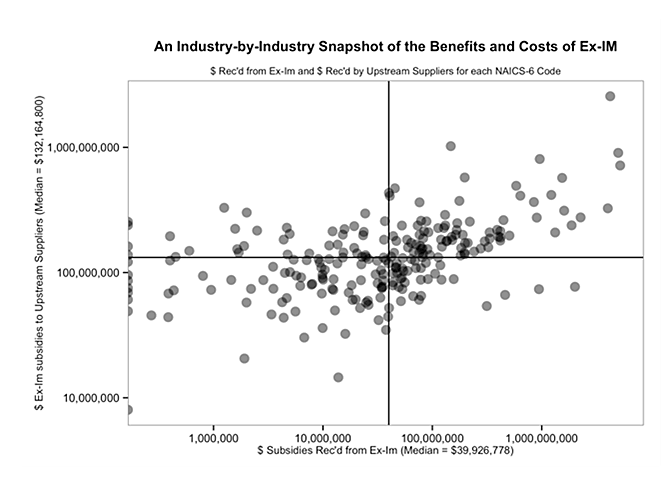 First note that the axes are in logarithmic scales because otherwise the wide range of values for both metrics would have obscured the details.  That means that the distance between each point on each axis is larger than it appears as you move away from the origin horizontally or vertically.  Values on the X-axis represent benefits (dollar authorizations from Ex-Im) to each industry and values of the Y-axis represent costs (adjusted, aggregated benefits to each industry’s upstream supplier industries). The quadrants are formed by the intersection of the lines drawn at the median values of each metric.

Indeed, each of the 36 industries in the top left quadrant is an Ex-Im victim because its “net benefit” (Benefit minus Cost) is negative. But the other quadrants are also heavily populated by industries with negative “net benefit.”  Twenty-four of 36 industries in the bottom right quadrant incurred costs in excess of benefits; 48 of 82 in the top right quadrant had negative net benefits; and 81 of 82 in the bottom left quadrant had larger costs than benefits.  All told, 189 of 236 U.S manufacturing industries can be characterized as Ex-Im’s victims, when a reasonable method to account for the unseen, unspoken costs of Ex-Im subsidies are taken into account.

Following is a table presented in ascending order of "net benefit," which means that the biggest industrial victims appear at the top (click the table segments for larger, more readable versions). 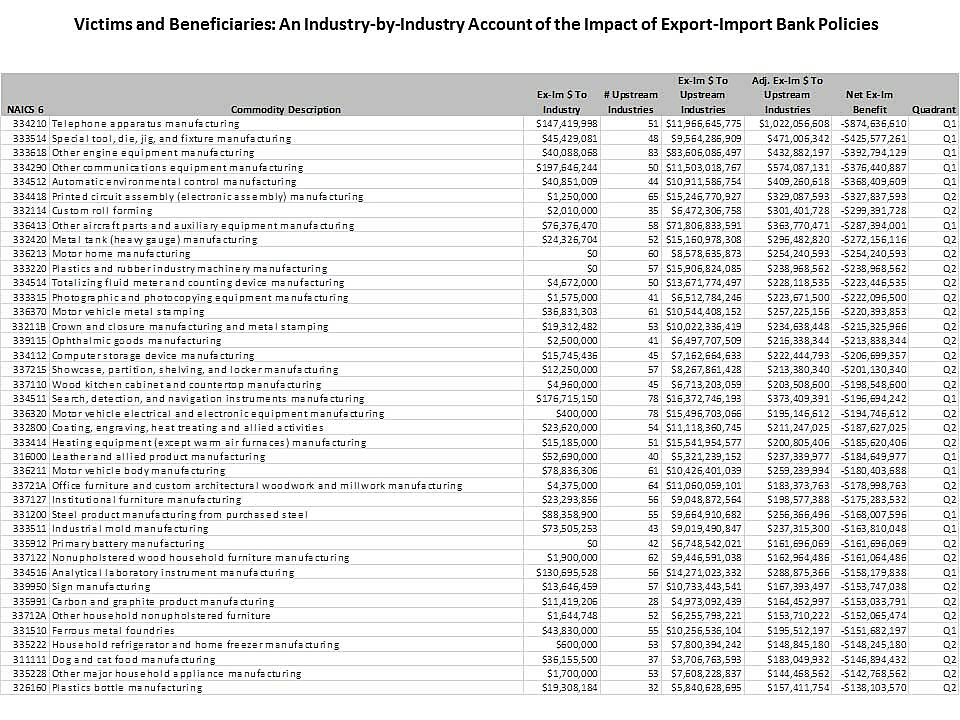 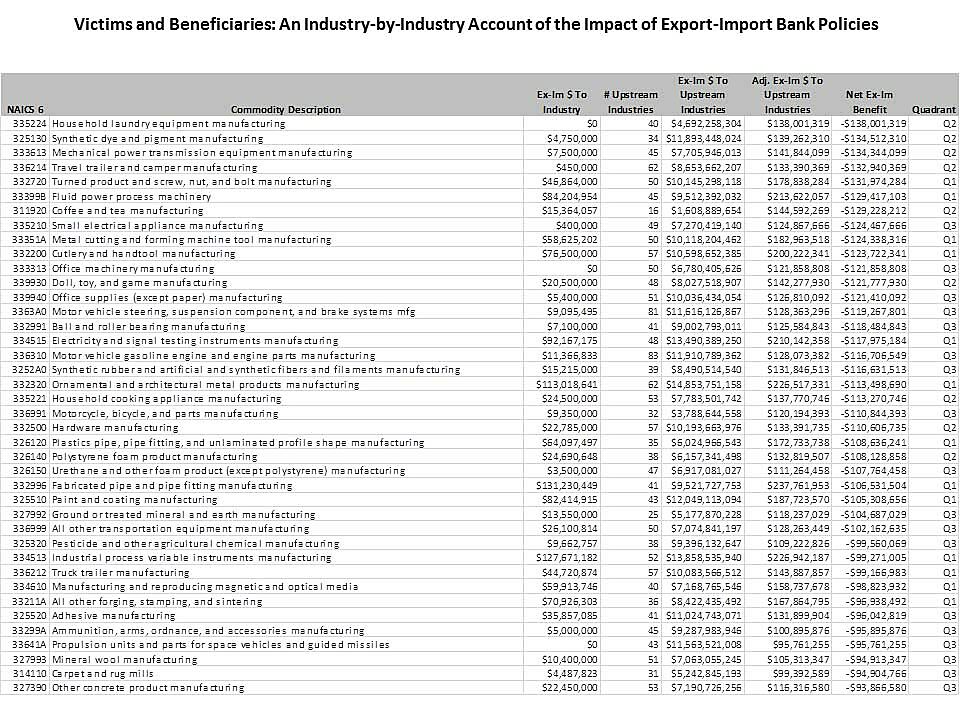 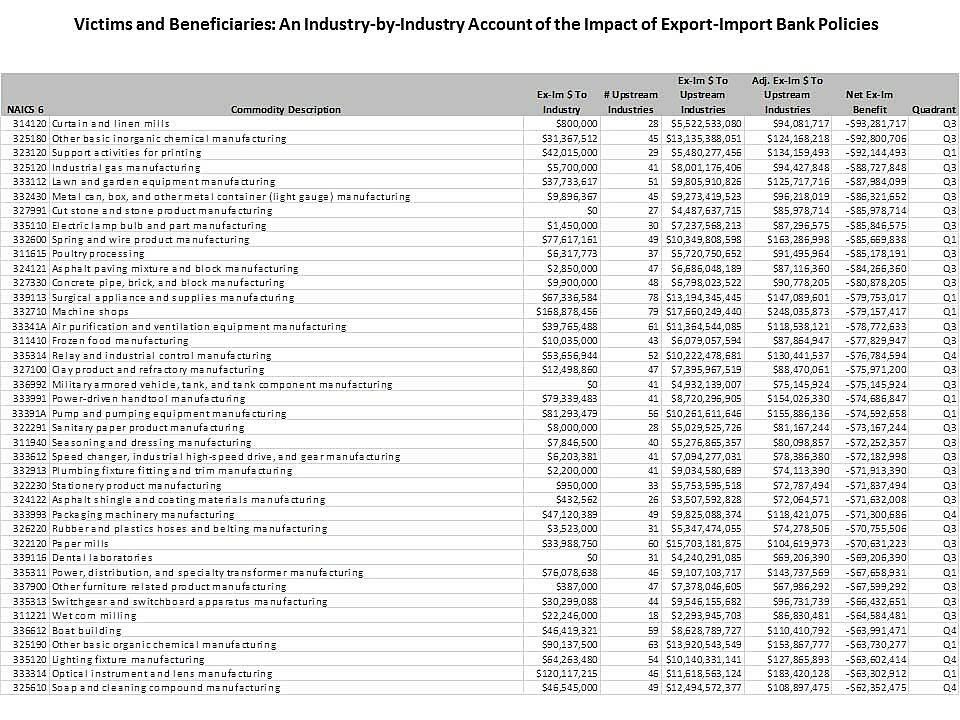 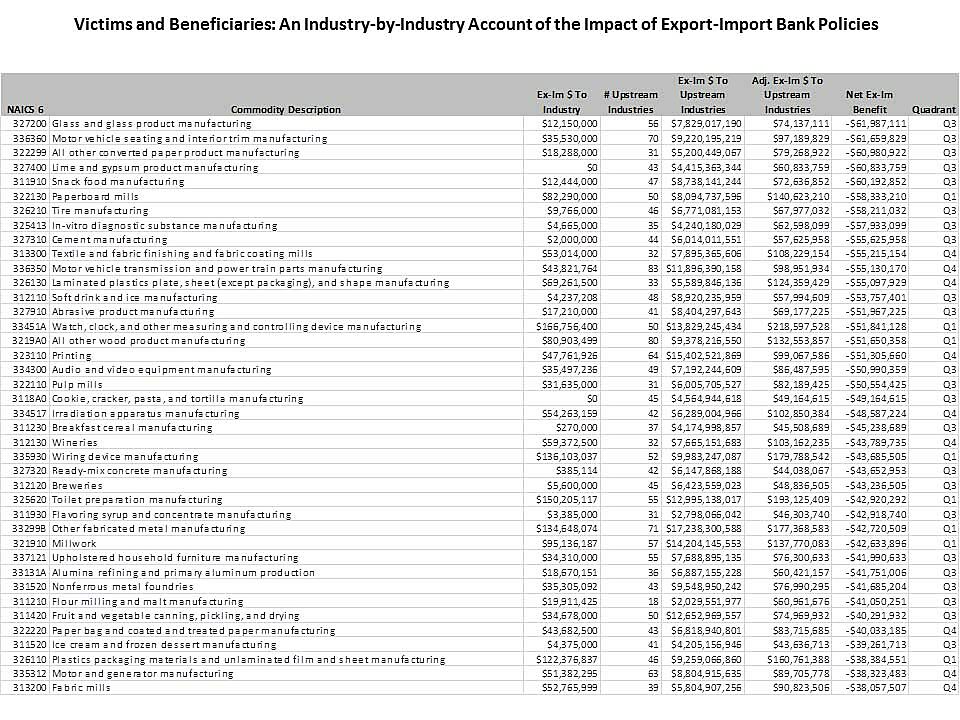 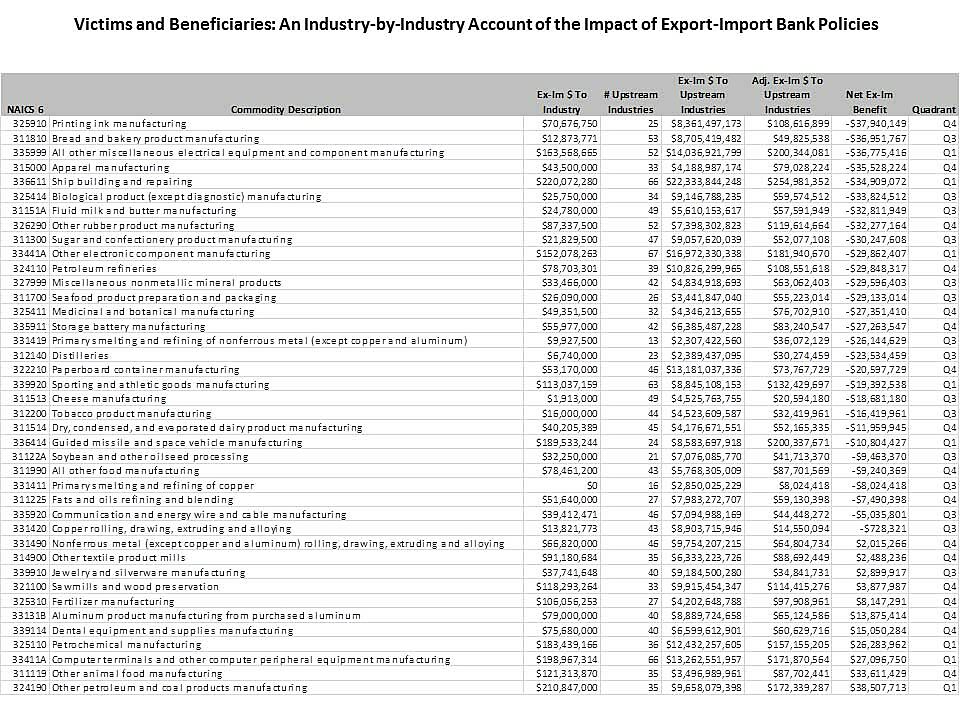 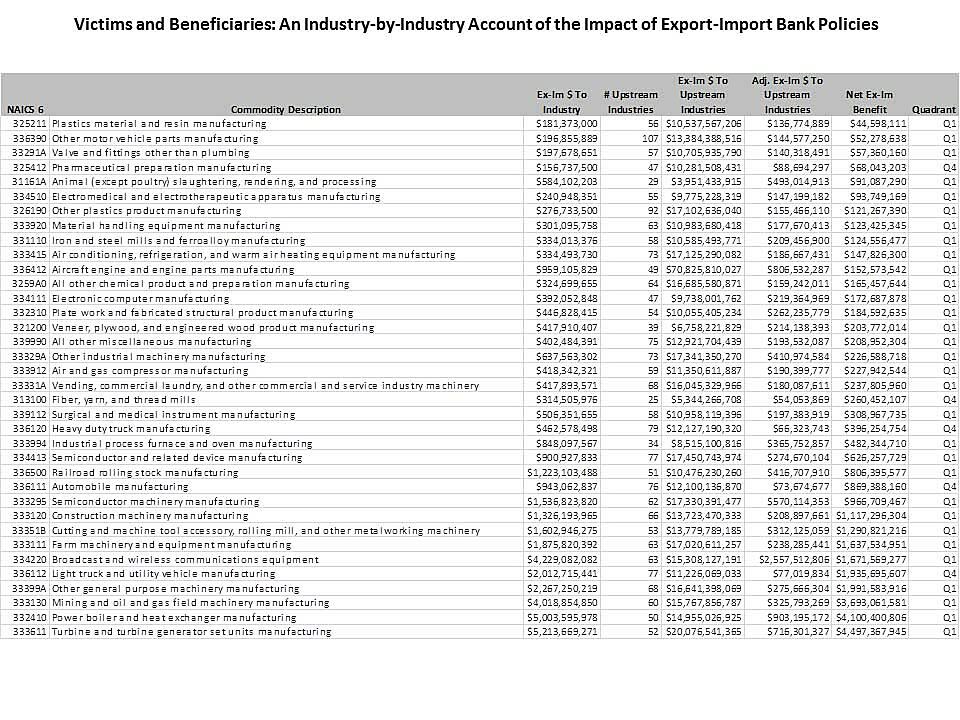 It turns out that for nearly every Ex-Im financing authorization that might advance the fortunes of a single U.S. company, there is at least one U.S. industry – and often dozens or scores of industries – whose firms are put at a competitive disadvantage because supply is being diverted, market power is being shifted, and the cost of capital is being lowered for their foreign competition.

There are hundreds and probably thousands of U.S. companies scattered over 189 industries that produce in the United States, employ American workers, pay federal, state, and local taxes, and contribute to the social fabric of the communities in which they operate, but are competitively disadvantaged by Ex-Im’s provision of low-rate financing to their foreign competitors. These are the unseen consequences – the collateral damage – of Ex-Im’s mission.