But a new Chicago Booth IGM Survey poll suggests economists are generally much more skeptical of the wisdom of jacking up top federal tax rates than these commentators suggest.


The economists were asked whether a top federal marginal income tax rate of 70 percent within the current code would raise substantially more revenue than today’s 37 percent without lowering economic activity. Just 18 percent of those surveyed agreed, against 49 percent who disagreed (21 percent vs. 63 percent when weighted by confidence.)[i] 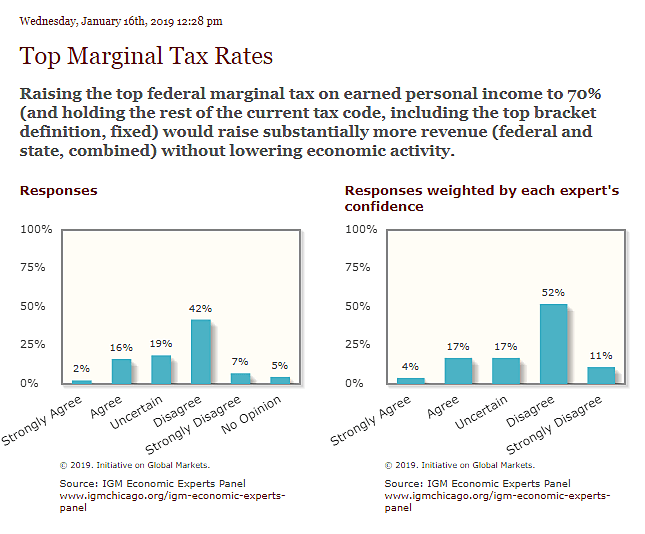 In other words, a clear majority of economists believe there’s no free lunch from higher marginal rates on the top income bracket. Either it will raise revenue but with economic distortions, or it won’t raise revenue, or it will both fail to raise revenue and be detrimental to broader economic health.


It’s worth noting the wording of the question does not leave much room for nuance. Richard Thaler asked why it deviated from Ocasio-Cortez’s actual proposal. Kicking in at a much higher income level, and so on a group likely to be more responsive in terms of tax planning, her policy would certainly raise less revenue than the policy asked about in the question.


Several other economists said they would have changed the way they voted if a word like “substantially” was inserted in front of economic activity too. But overall, a host of the economists commented to the effect that such high marginal rates within the current code would lead to a whole host of new avoidance activity, on the one hand, and reduced labor supply on the other.


Given the particular wording of the question, the most interesting vote cast was that of Emmanuel Saez, who has been responsible for much research in this area. Intriguingly, he was in the minority in voting that he agreed a 70 percent top marginal rate would raise revenue without lowering economic activity.


On one level, that’s not surprising. His work with Peter Diamond concluded that a total combined 73 percent top marginal tax rate would be revenue maximizing and “optimal” if we put zero weight on the welfare of the rich. They believe too that the real economic responses to higher top tax rates would be small. As such, their research is the academic go‐​to for those arguing for much higher top marginal tax rates.


But when you read the details of how they got to that result, it’s difficult to see how Saez answered this IGM question in the affirmative. The Diamond‐​Saez paper makes clear their 73 percent result only holds if you presume policymakers could redesign the tax code to eliminate deductions, exemptions and other possibilities for tax planning or avoidance.


If not, then presuming people in the top tax bracket are as responsive today to tax changes as in the 1980s, the revenue maximizing total combined marginal tax rate would be much lower at 54 percent – equating to around a 48 percent marginal federal income tax rate. This, incidentally, is very similar to the revenue‐​maximizing income tax rate calculated by the UK government.


According to Saez’s own work then, raising the 37 percent top marginal income tax rate to 70 percent within the current code (as the question clearly sets out), would take us far beyond the revenue maximizing top marginal tax rate. It would be self‐​defeating in terms of revenue raising. We would be far on the wrong side of the Laffer curve.


It seems extraordinarily unlikely, in a world where 48 percent is the revenue maximizing rate, that a 70 percent rate would raise “substantially more revenue” than a 37 percent rate, as Saez’s answer implies.