A study by the Tarrance Group for the Republican organization GOPAC provides further evidence on the existence of voters who don't fall into the "conservative" or "liberal" box.  Tarrance asked people who voted in the 2008 election not just to label themselves conservative or liberal, but to describe their views on both fiscal and social issues. The questions were:

Tarrance leaves out the "moderate" option, but a few respondents volunteer it.

The results were interesting. While 69 percent of respondents described themselves as conservatives on fiscal issues, only 53 percent said they were conservative on social issues. When you combine the responses, you find that 23 percent of respondents described themselves as fiscally conservative but liberal or moderate on social issues. That's pretty close to the estimates of the libertarian vote that David Kirby and I presented in "The Libertarian Vote in the Age of Obama." See pages 4-7, especially Figure 3, in the full study. Using fairly strict criteria, we declared 14 percent of the electorate to fall into the libertarian category. But three other studies yielded 23 to 26 percent who gave libertarian answers to questions about both fiscal and social issues.

Tarrance presented the results to GOPAC this way (the "moderate" category includes both those who volunteered the word moderate and those who declined to pick either liberal or conservative as a label): 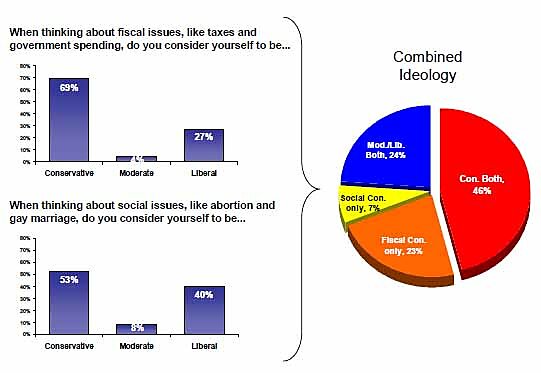 Interestingly, these "fiscally conservative, socially moderate or liberal" respondents made up 17 percent of Republicans but 24 percent of Democrats -- and 41 percent of ticket-splitters: 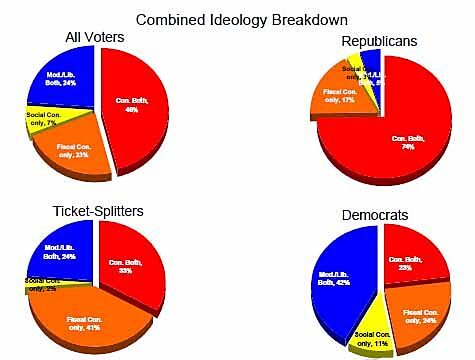 So a couple of interesting points to take away from this study (which was actually done right after the 2008 election but I only just learned about): First, conservative pundits have talked a lot over the past year about Gallup's findings throughout 2009 that conservatives outnumbered both moderates and liberals, suggesting a slight shift to the right among Americans. The GOPAC study shows us that lots more Americans think of themselves as fiscal conservatives than as social conservatives. That's a result that Ramesh Ponnuru, who regularly argues that Republicans win more votes on social conservatism than on economic conservatism, might ponder.

Second, as Kirby and I keep saying, there actually are libertarian-ish voters, who generally prefer less government in both economic and personal matters, and politicians, consultants, and pundits ought to pay attention to them.

Third, Tarrance found that 23 percent of likely voters declare themselves conservative on fiscal issues but not on social issues (and only 7 percent say they're socially but not fiscally conservative, and they're almost all Democrats), and that number is very close to numbers found by other pollsters. But when Zogby asked people, “Would you describe yourself as fiscally conservative and socially liberal?” 59 percent said yes. That's a much larger number. Maybe the combination is particularly attractive -- "best of both worlds."