The Center for Immigration Studies recently put out a study arguing that immigration has had negative effects on California. One of their measures was a comparison of how many people in the state were receiving some form of welfare compared to other states. I found that data (see Table 3 of the report) very interesting, but not because of the immigration debate (I'll leave others to debate that topic). Instead, I wanted to get a better understanding of the variations in government dependency. Is there a greater willingness to sign up for income redistribution programs, all other things being equal, from one state to another? The "all other things being equal" caveat is very important, of course, since the comparison produced by CIS may simply be an indirect measure of the factors that determine welfare eligibility. One obvious (albeit crude) way of addressing this problem is to subtract each state's poverty rate to get a measure of how many non-poor people are signed up for income-redistribution programs. Let's call this the Moocher Index. 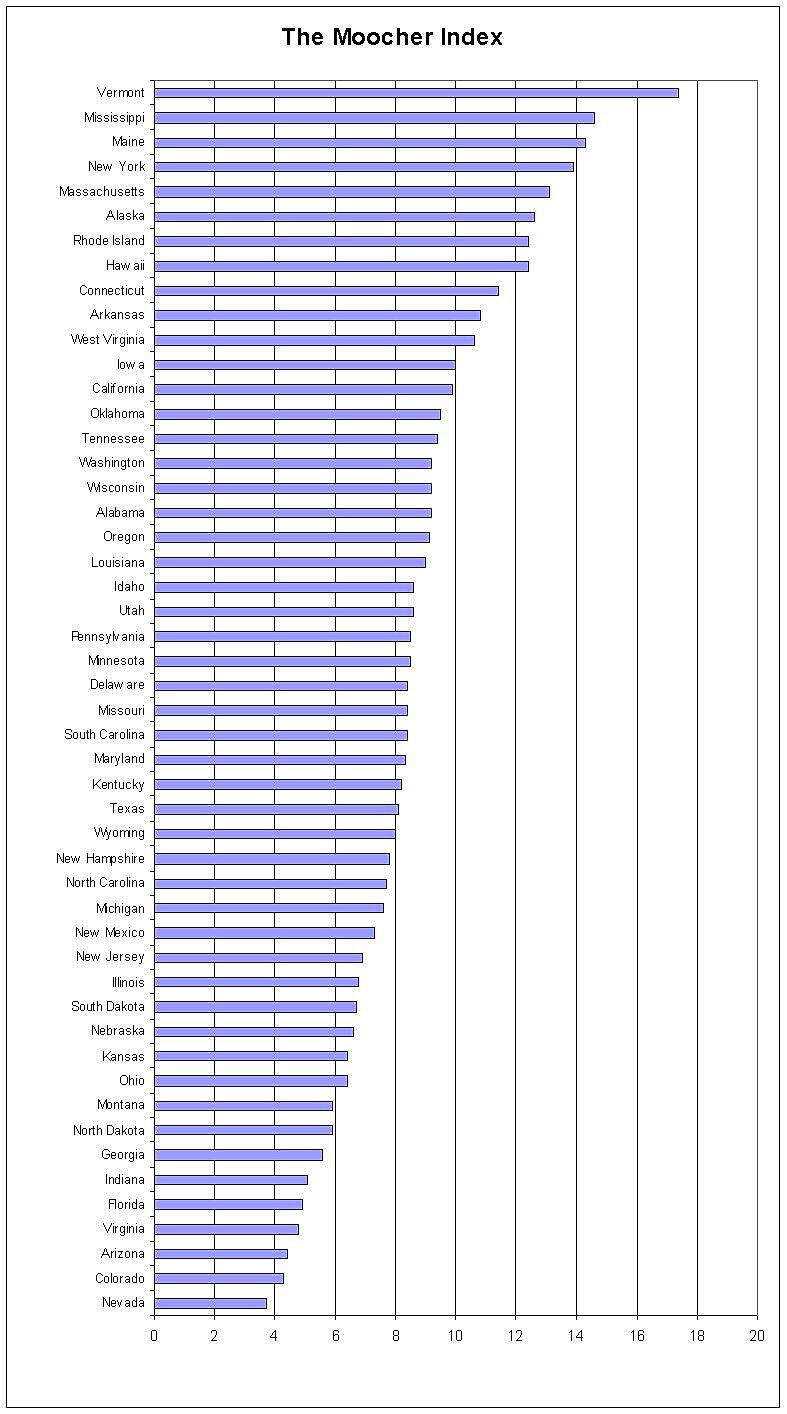 A few quick observations. Why is Vermont (by far) the state with the largest proportion of non-poor people signed up for welfare programs? I have no idea, but maybe this explains why they elect people like Bernie Sanders. But it's not just Vermont. Four of the top five states on the Moocher Index are from the Northeast, as are six of the top nine. Mississippi also scores poorly, coming in second, but many other southern states do well. Indeed, if we reversed the ranking and did a Self-Reliance Index, Virginia, Florida, and Georgia would score in the top 10. Nevada, arguably the nation's most libertarian state, is the state with the lowest number of non-poor people signed up for welfare.

Let's now emphasize several caveats. I'm not an expert on the mechanics of social welfare programs, but even I know that eligibility is not governed solely by the poverty rate. Indeed, some welfare programs are open to people with much higher levels of income. This means that a more thorough analysis at the very least would have to include some measure of income distribution by state. Moreover, states use different formulas for Medicaid eligibility, so this index ideally also would be adjusted for state-specific policies that make it easier or harder for people to become dependent. There also are some states (and even colleges) that actually try to lure people into signing up for welfare, which also might affect the results. And I'm sure there are many other factors that are important, including perhaps immigration. If anybody knows of substantive research in this area, please don't hesitate to share material.