In science,…novelty emerges only with difficulty, manifested by resistance, against a background provided by expectation. Initially, only the anticipated and usual are experienced even under circumstances where the anomaly is later to be observed.

One of global warming’s “novelties” is that satellite measurements show the extent of ice surrounding Antarctica is growing significantly, something not anticipated by our vaunted climate models.


Thomas Kuhn would predict “resistance”, and today we see yet another verification of how stubborn science can be in the face of results don’t comport with the reigning paradigm. The paradigm, in this case, is that our climate models are always right and any counterfactuals are because something is wrong with the data, rather than with the predictions.


“Resistance” means that peer‐​reviewers aren’t likely to find much wrong with papers that support the paradigm (and that they will find a lot wrong with ones that don’t). Further, the editors of scientific journals will behave the same, curiously avoiding obvious questions.


Perhaps as fine an example as there is of this process appeared June 21 in the journal The Cryosphere, which is published by the European Geosciences Union. It is a paper called “A spurious jump in the satellite record: has Antarctic sea ice expansion been overestimated?”, by Ian Eisenman (Scripps Institution) and two coauthors.


As shown in our figure, the increase in Antarctic ice extent has been quite impressive, especially since approximately 2000. 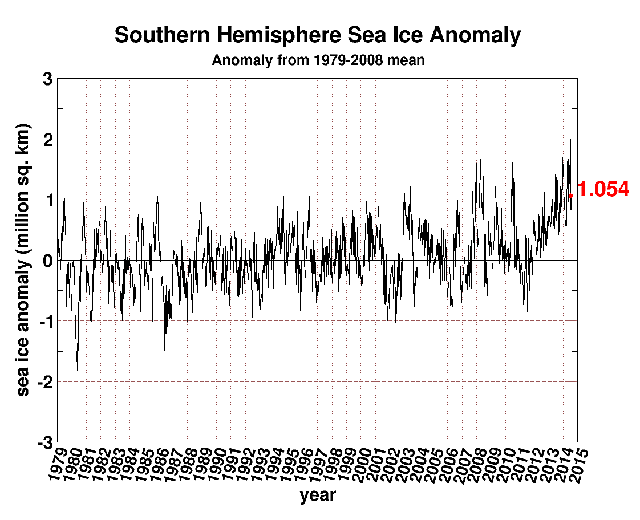 
Not so fast. Eisenman et al. write that “much of the expansion [of Antarctic ice] may be a spurious artifact of an error in the processing of satellite observations” [emphasis added].


Wow, that would be really something, knocking down one of the glaring anomalies in global climate, and adding credence to the models. Eisenman et al. note

No doubt working from the premise that the observed increase in Antarctic ice just can’t be right, Eisenman et al. would appear to have finally verified that hypothesis.


Until you look at the numbers.


Then you are left questioning the review process—at all levels—relating to this work.


The key finding is that there was a processing error in the data. Microwave sensors that are used to estimate ice extent (and also lower atmospheric temperature) wear out in the harsh environment of space, and new satellites are launched with fresh equipment. But each one doesn’t send data with the exact same statistical properties, so a succeeding sensor is “calibrated” by comparison with an existing one.


Eisenman et al. found that there was a change in the intercalibration between instruments in December, 1991 when the data were reprocessed in 2007. Apparently this wasn’t immediately obvious because there is so much “noise” in the data.


Indeed, Eisenman et al have located the needle in this haystack, showing the step‐​change between the two data sets:


Wow, that’s a lot! After all, Eisenman et al. tell us that this shift explains “much” of the increase in Antarctic sea ice.


Hopefully readers caught on before going this far. If the reason that the shift was undetected is because the data is so noisy, how important can it be? Now, have a look at the overall ice extent, shown in our first figure.


The y‐​axis is in millions of square kilometers. The change since the turn of the century is about 1.3 million square kilometers, a mountain of ice The step change is about 200,000, a molehill. That doesn’t sound like “much” to us.


But, hey, if you don’t look too close—and we are sure are greener friends (or the reviewers) won’t (or didn’t)—you might believe that everything is ok with the reigning, model‐​based paradigm. In fact there’s “much” that is wrong with it.


As Kuhn wrote, “Only the anticipated and usual are experienced even under circumstances where the anomaly is later to be observed.”