Misunderstanding Inflation through the Years

NPR reports on rising food prices across the world. They may have played some role in the revolts in Tunisia and Egypt, and if so, those wouldn’t be the first revolutions sparked by inflation. NPR reporter Marilyn Geewax mentioned several reasons that food prices are rising — droughts, floods, oil prices, financial speculation — but not the obvious one: the continuing creation of unbacked money by central banks around the world. As Milton Friedman said, “Inflation is always and everywhere a monetary phenomenon.” And as Jerry O’Driscoll wrote just two weeks ago, about rising food prices, “Inflation is here.” But that point isn’t yet universally understood, at least not at our government radio network.


Anyway, I turned off the radio and turned on the television, where TCM was just broadcasting the 1942 MGM propaganda film “Inflation” (made at the request of the Office of War Information but then never released because it was too anti‐​capitalist even for wartime propaganda). Edward Arnold plays the Devil, in league with Hitler and posing as a businessman who who encourages people to buy more, evade price controls, stockpile goods, and use the black market. (The film was made by Cy Endfield, who had been a member of the Young Communist League at Yale and went on to make such films as Zulu and Universal Soldier.) The film features what appears to be President Franklin D. Roosevelt’s April 28, 1942, radio speech, “Total War and Total Effort.” As the young couple in the film go to buy a new radio, the shopkeeper turns on the radio and they hear FDR say:

You do not have to be a professor of mathematics or economics to see that if people with plenty of cash start bidding against each other for scarce goods, the price of those goods (them) goes up.


Yesterday I submitted to the Congress of the United states a seven‐​point program, a program of general principles which taken together could be called the national economic policy for attaining the great objective of keeping the cost of living down. I repeat them now to you in substance:


First. we must, through heavier taxes, keep personal and corporate profits at a low reasonable rate.
Second. We must fix ceilings on prices and rents.
Third. We must stabilize wages.
Fourth. We must stabilize farm prices.
Fifth. We must put more billions into War Bonds.
Sixth. We must ration all essential commodities which are scarce.
Seventh. We must discourage installment buying, and encourage paying off debts and mortgages.

As it happens, I have a 1942 OWI poster with that same message hanging in my kitchen: 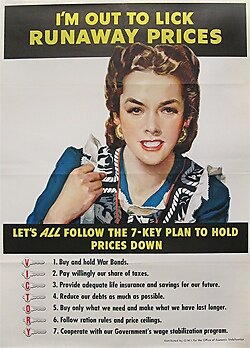 In fact, of course, price inflation was the natural result of a substantial increase in the money supply before and during the war. All of FDR’s policies — cartels, destruction of crops, wage and price controls, rationing — were misguided attempts to deal with the consequences of monetary manipulation and other bad policies.


By the way, FDR famously said, “The country needs and, unless I mistake its temper, the country demands bold, persistent experimentation. It is common sense to take a method and try it: If it fails, admit it frankly and try another. But above all, try something.” Which might explain another propaganda film produced by MGM, this one in 1933, that extolled the virtues of FDR’s policy of inflation, utilizing the argument that is variously called “stimulus” or “the broken window fallacy.” The film cited the successful results of Civil War inflation. “What inflation has done before it will do again! … What a man! And what a leader! Yowzer! Happy days are here again!” Yeah, that went well. And by 1942 MGM was back on board, making a government propaganda film opposing inflation.