Mission Failure: America and the World in the Post‐​Cold War Era

One of Michael Mandelbaum’s tasks in his highly provocative new book, Mission Failure: America and the World in the Post‐​Cold War Era, is to locate the principal inspiration for American foreign policy debacles over the last quarter century.


He finds it in the American foreign policy establishment that has surrounded him over the last decades during which he has been the Christian A. Herter Professor of American Foreign Policy at the Johns Hopkins School of Advanced International Studies in Washington, DC. 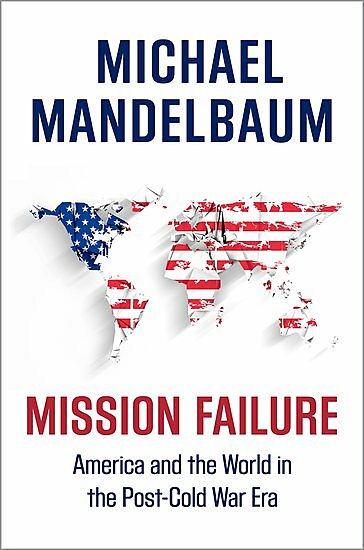 He will be talking about his work at a book forum to be held at noon on April 20 several blocks down Massachusetts Avenue at the Cato Institute. Although Cato has been perhaps the only think tank in the city that has managed to stay out of the foreign policy establishment, members of that establishment might do well to attend (and don’t forget: there is a free lunch afterward). Mandelbaum’s presentation will be followed by comments on the book by Keir Lieber of Georgetown University and Brad Stapleton of Cato.


Assessing the history of American military and foreign policy between 1993 and 2014, Mandelbaum identifies a pattern of nearly perfect failure: policies that proved to be counterproductive and military interventions that failed to achieve their presumed purpose which was to create viable, responsive, and effective governments.


Although, as he points out, the American public as a whole was able to contain its enthusiasm for transforming other countries, the establishment has rarely suggested that regrettable happenings overseas were not the business of the United States or that America was simply not capable of setting things right. That is, it was the establishment, not the general public, that principally applauded such extravagant, self‐​infatuated (and incorrect) pronouncements as the one Mandelbaum quotes from Secretary of State Hillary Clinton: “American have always risen to the challenges we have faced. It is in our DNA. We do believe there are no limits on what is possible or what can be achieved.”

It certainly seems, however, that there have been two levels of failure. Those of the 20th century generally failed to correct bad situations that had been created by the locals—as in Somalia. Those of the 21st mostly made bad conditions much worse—as in Afghanistan, Iraq, Yemen, Libya, and Pakistan. In the last of these, 74% of Pakistanis have come to view the United States as an enemy even as their government cashes the aid checks of $2 or $3 billion it receives annually from that enemy. As negative foreign policy achievements go, that is quite spectacular. There is thus a difference between failure and abject failure.


In reflecting on the phenomenon, Mandelbaum suggests that one reason the United States serially ventured into disastrous interventions “was that it could.” It had the resources and “no other country or coalition of countries was in a position to stop it.”


In the wake of the Vietnam War, strategist Bernard Brodie wistfully reflected, “One way of keeping people out of trouble is to deny them the means for getting into it.” A third of a century later, that sage admonition continues to resonate.


You can register for the book forum here.