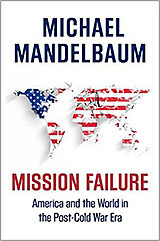 Please join us as Michael Mandelbaum — prominent columnist and author, and a leading foreign‐​policy thinker — discusses his new book, Mission Failure: America and the World in the Post – Cold War Era. In this definitive work, Mandelbaum critically assesses American military interventions since the end of the Cold War and the deeply flawed post – Cold War efforts to promote American values and American institutions throughout the world. Each intervention was designed to transform local economic and political systems, and each, argues Mandelbaum, failed. It is, he writes, “the story of good, sometimes noble, and thoroughly American intentions coming up against the deeply embedded, often harsh, and profoundly un‐​American realities of places far from the United States.” In these encounters, he concludes, “the realities prevailed.” We hope you will be able to join us for what will be a provocative and highly illuminating event.