The triangle graph, from a February 10 study from Imperial College London, shows that most people infected by COVID-19 are never counted as being infected. That is because, the Imperial College study explains, “the bottom of the pyramid represents the likely largest population of those infected with either mild, non‐​specific symptoms or who are asymptomatic.” 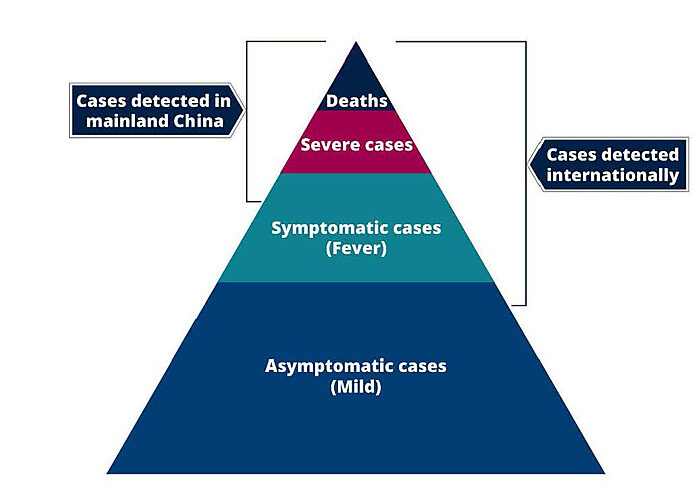 As the Director General of the World Health Organization (WHO), Tedros Adhanom, explained in his February 28 briefing, “Most people will have mild disease and get better without needing any special care.” Several studies have found that about 80% of all the COVID-19 cases have relatively minor symptoms which end without severe illness and therefore remain unreported.

A Chinese study in the Journal of the American Medical Association, February 20, found a “case‐​fatality rate” of 2.3%, meaning 1,023 died out of 44,672 cases. But the total sample in that study (72,314) included an additional 27,642 non‐​confirmed cases, and simply including cases (let alone unreported minor cases) would have reduced the fatality rate to 1.4%. China‐​based estimates are largely confined to cases with the most severe symptoms, so it should be no surprise that the reported death rate among severe cases is much higher than it would be if the data also included “most people” who “have a mild disease and get better.” The risk of infecting more people is also more severe in China data, since severe cases are concentrated and transmitted in hospitals. This can also lead to overstated estimates of how many people are infected by someone with COVID-19, including the WHO “reproduction number” estimate of 1.4–2.5, which is mainly based on evidence from China.

As the graph indicates, other countries include more non‐​severe cases than China does, notably by testing incoming travelers who arrive with a cough and fever. Even after casting a slightly wider net, however, the number of confirmed cases probably captures only about 30% of the actual number.

By the morning of March 2, there had been 89,253 confirmed cases of COVID-19 reported around the world, with about 96% of those in Asia. For comparison, the were an estimated 37.9 million people living with HIV in 2018.

It is worth noting that have also been 45,393 known recoveries from COVID-19 (compared to 3048 cumulative deaths) and, importantly, recoveries have been outnumbering new cases.

What about the relatively small number of COVID-19 cases outside China? In his February 28, the Director General of WHO reported that “Outside China, there are now 4351 cases in 49 countries, and 67 deaths.” Deaths of 67 divided by 4351 seems to demonstrate a death rate of 1.5%. But such calculations are highly misleading. They assume the denominator of that ratio (4351) is as accurate as the numerator (67). Yet people with “mild cases who get better” are unlikely to ever be included in the denominator.

If the WHO estimate of 4351 confirmed cases amounted to 30% of the actual number infected outside of China at that time, for example, then the combined total of both unreported and confirmed cases would be 4351 divided by 0.30 or 14,503. In that case, the actual death rate would 67 divided by 14,503, or less than one half of one percent (0.46%). Also, such death rates in the recent past are likely to come down over time, because they happened before promising new clinical trials of antiviral drugs that proved effective against more deadly viruses such as SARS, HIV and Ebola.

For perspective, the SARS coronavirus killed 774 people out of 8096 known cases in 2003, which was a death rate of 9.6% before it vanished the next year. Bird flu in 1997 was predicted to be a deadly pandemic, but it killed very few people before it disappeared. In its February 22 U.S. Influenza Surveillance Report, “CDC estimates that so far this season there have been at least 32 million flu illnesses… and 18,000 deaths from flu.” Dividing 18,000 by 32 million implies a low U.S. death rate of .0138% from the flu. Looking at the death rate alone is obviously not enough: We also have to look at the numbers of people infected, and the duration of the epidemic, which is why the flu killed so many more people than SARS. Still, it is important to avoid scaring people about the risk of death from COVID-19 by continuing to ignore the fact that the vast majority of cases “have mild disease and get better without needing any special care.”