Raj Chetty, the head of Stanford’s “Equality of Opportunity” project, recently released a paper called “The Fading American Dream” co-authored with another economist, a sociologist, and three grad students. It claims that “rates of absolute mobility have fallen from approximately 90% for children born in 1940 to 50% for children born in the 1980s.” [Though the study ends with 2014, when most of those “born in the 1980s” were not yet 30.]

The title alone was sure to attract media excitement, particularly because the new study thanks New York Times columnist David Leonhardt "for posing the question that led to this research.”

Leonhardt, in turn, gushed that Chetty’s research “is among the most eye-opening economics work in recent years.”  He explained that he asked Chetty to “create an index of the American dream” which “shows the percentage of children who earn more money. . . than their parent earned at the same age.”  The result, he concludes, is “very alarming. It’s a portrait of an economy that disappoints a huge number of people who have heard that they live in a country where life gets better, only to experience something quite different.”

“Another Chetty-bomb just exploded in the mobility debate,” declared a Brookings Institution memo: “Only half of Americans born in 1980 are economically better off than their parents. This compares to 90 percent of those born in 1940.”

At Vox.com,  Jim Tankersley proclaimed “The  American Dream [is] collapsing for young adults.”

“Sons born in 1984 are only 41 percent likely to earn more than their fathers, compared to 95 percent of sons born in 1940,” wrote USA Today reporter Nathan Bomey.  “If the American dream is defined as earning more money than your parents,” said Bomey, “today’s young adults are just as likely to have a nightmare as they are to achieve the dream.”

The Chetty study proved to be a politically irresistible story, since it appears to confirm a popular nostalgia for the good old days and belief that it has become more and more difficult to get ahead. But that is not what the study really shows.  What it really shows is:

First: Incomes were extremely low in 1940, so it was quite easy to do better 30 years later.

Second: Doing better than your parents is not defined by your income at age 30, but by income and wealth accumulated over a lifetime (including retirement).

Third: A rising percentage of young people remain in grad school at age 30, so their current income is lower than that of their parents at that age but their future income is likely to be much higher.

Regarding the First point, it should be no surprise that children born during the Great Depression or World War II did better than their parents. Of course they did. We don’t need an intricate statistical study to make such an obvious point.

I was born on a Texas Army base in 1942 where my father was a lieutenant earning $167 a month. That was not a difficult target for me to exceed in 1972.

Comparing incomes of children and their parents at age 30 over many decades tells us more about the very low incomes of poorly-educated and poorly-employed parents in the early decades than it does about the incomes of their children more recently.

To return to the “absolute mobility” of children born in the 1940s would require another 1930-38 Great Depression, another World War, and a massive loss of college degrees. 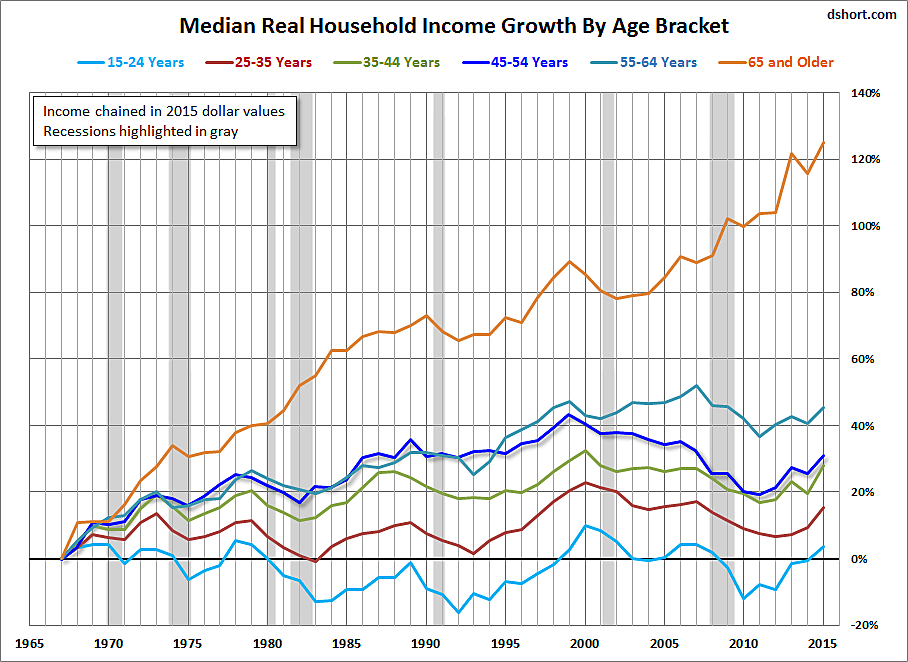 Turning to the Second point, “Fading American Dream” depends entirely on an indefensible caricature of that dream—namely, as earning more than your parents did at a very young age (30).

The study claims “One of the defining features of the ‘American Dream’ is the ideal that children have a higher standard of living than their parents.”  But that means over a lifetime (importantly including retirement)—not just at age 30. Labor incomes of peak at age 50 for most college grads, and in the mid-50s for those with advanced degrees. Investment incomes commonly peak in retirement.

The Graph from Advisor Perspectives shows cumulative changes in real median income by age groups from 1967 to 2015. Median income rose much more at ages 45–64 than it did at ages 25–34, and the growth of median income has been fastest by far for those over age 65 (thanks in large part to rapid growth of tax-favored savings plans for retirement).

To judge yourself a failure at age 30 because your income had not yet passed your father’s income at the same age would be a psychological problem, not an economic problem.

Finally, switching to the Third point, a large and growing share of college grads now remain in graduate school past age 30, so (unlike their parents) they have little or no earned income. That would have been quite unusual at age 30 in 1940-80. The “average graduate student today is 33 years old. Students in doctoral programs are a bit older.”  Grad students have low current incomes at age 30, but high lifetime incomes.

An Urban Institute report finds “The share of adults ages 25 and older who have completed graduate degrees rose from eight percent in 1995 to 10 percent in 2005, and to 12 percent in 2015, growing from 34 percent to 37 percent of individuals with bachelor’s degrees.”

Most men born around 1940 went to work right after high school, assuming (often wrongly) they waited to finish high school.  By age 30 most men my age had many years of valuable work experience, known as “human capital” or on-the-job-training. Most of us married in our twenties and were in two-earner families with children by age 30.

The finding of a 2014 study by Chetty and Emmanuel Saez that “measures of intergenerational mobility have remained extremely stable for the 1971–1993 birth cohorts” is still credible and relevant.  Mr. Chetty's latest 30-year parent-child comparisons involving those born from 1940 to 1984, by contrast, are not credible and not relevant.