Mirror, Mirror on the Wall, Which Country Has the Most Expensive Bureaucrats of All?

I've complained endlessly about America's bloated and expensive government bureaucracies. It irks me that people in the productive sector get slammed with ever-higher taxes in part to support a gilded class of paper pushers who have climbed on the gravy train of public sector employment.

It even bothers me that bureaucrats put in fewer hours on the job than private-sector workers, even though I realize the economy probably does better when government employees are lazy (after all, we probably don't want hard-working OSHA inspectors, Fannie and Freddie regulators, and IRS bureaucrats).

But sometimes it helps to realize that things could be worse. And based on some international data from my "friends" at the OECD, let's be thankful the United States isn't Denmark.

That's because nearly 20 percent of Denmark's economic output is diverted to pay the salaries and benefits of bureaucrats, compared to "only" about 11 percent of GDP in the United States. 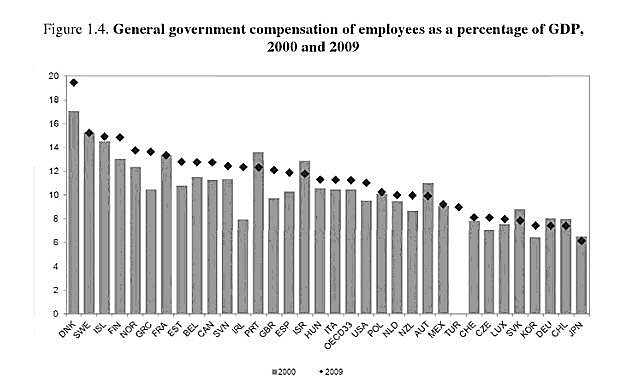 Speaking of Nordic nations, they tend to get bad scores because a very large share of their populations are feeding at the government employment teat. 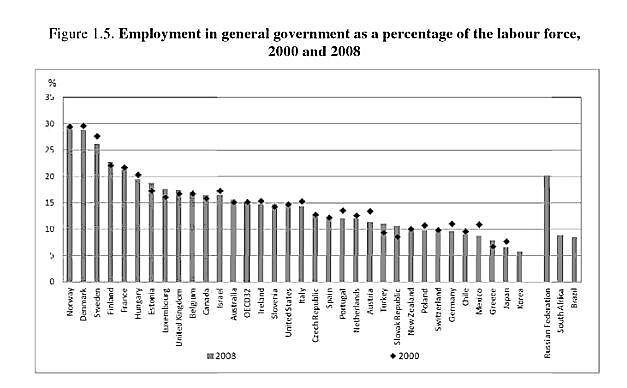 Whether we're looking at the total cost of the bureaucracy or the number of bureaucrats, the United States is a middle-of-the-pack country.

But I am somewhat surprised by some of the other results.

P.S. These numbers are only for OECD nations, so it's quite possible that other jurisdictions are worse. To cite just one example, I was one of the researchers for the Miller-Shaw Commission, which discovered several years ago that fiscal problems in the Cayman Islands are almost entirely a function of too many bureaucrats with too much compensation.

P.P.S. Here's my video on the cost of bureaucracy in the United States.

P.P.P.S. Denmark has a bloated and costly bureaucracy, but it compensates by having very pro-market policies in areas other than fiscal policy.

P.P.P.P.S. Perhaps the numbers are bad in Denmark because people like Robert Nielson are listed on government payrolls as independent leisure consultants?