Tomorrow, Mexico’s president-elect, Enrique Peña Nieto, takes office. In the six years of current President Felipe Calderon’s administration, the disastrous results of its war on drugs have dramatically changed the debate so as to include serious discussion of ending drug prohibition. Calderon has recently called on the United States to explore market alternatives to the drug war, and three days ago Peña Nieto said, “I am in favor of a hemispheric debate on the effectiveness of the drug-war route we’ve been on.”

Times have certainly changed since Milton Friedman visited Mexico in May 1992 to speak at a Cato Institute conference during which he argued in favor of drug legalization. The cartoon below (which appeared in El Economista, May 22, 1992) typified the consensus Mexican reaction: 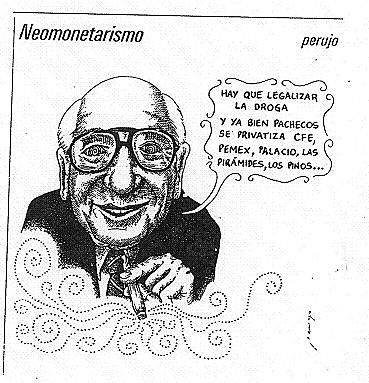 Reality has a way of sobering people’s minds, and Friedman’s view is no longer ridiculed in Mexico or in the rest of Latin America. (I predict Mexico will also head toward energy privatization sooner or later.)